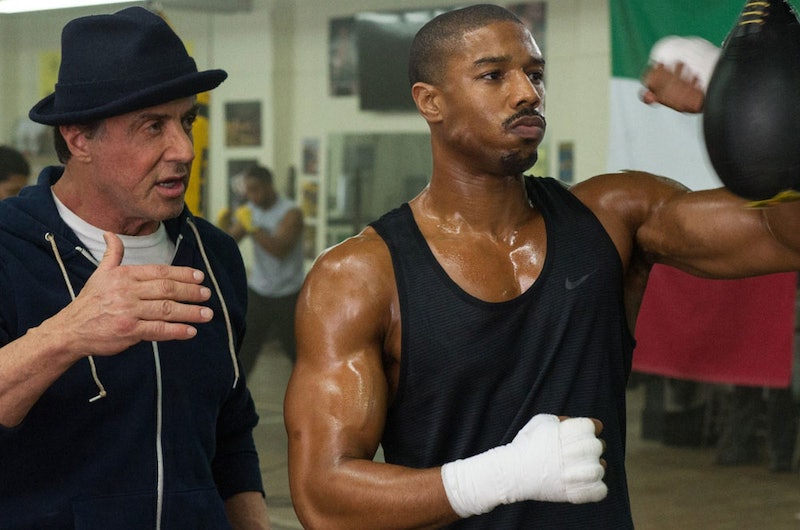 After making fans cry in the critically praised Fruitvale Station (2013) and wooing us as new Human Torch in this year's Fantastic Four reboot, actor Michael B. Jordan is gearing up to wow yet again in Creed, a spin-off of the Rocky film series which started in 1976. Directed by Ryan Coogler (Fruitvale Station) and produced by Rocky's creator Sylvester Stallone, Creed is the seventh film in the Rocky canon. In the film, Jordan plays the son of the world heavyweight champion Apollo Creed, Adonis Johnson Creed. He travels to Philadelphia, meets Rocky Balboa and decides he wants to be trained by the famous, albeit aged, pro boxer. As promotions for the movie have shown, the actor looks fantastic and incredibly fit for Creed, which begs the question, did Michael B. Jordan really box in Creed ? His training routine must've been intense.

In many ways, Creed is a major departure from its predecessors. For one, it's the first of the Rocky franchise not written by Stallone. But even more interesting, as noted by the Wall Street Journal, is the nod to modern-day change, as Creed moves to the neighborhoods of young black people and away from Rocky's focus on the the working-class, primarily white neighborhoods of Philadelphia. The result is a new type of Rocky movie for today's ever-diverse millennial generation. But one way the movie pays tribute to the franchise? By having star Jordan get in amazing shape to play Adonis, and learn to box for the part.

In a recent interview with Us Weekly, Jordan spoke all about what it took to get into tip-top Rocky shape. Said the actor,

"[Training] differed from week to week, but some days it would be boxing and weight lifting. Some days it would just be boxing and cardio. I worked out two to three times a day. I ate five to six times a day, every two and a half hours. I drank about a gallon and a half of water every day. Just doing that consistently for about 10 or 11 months, you see a physical change!"

Jordan used music to help him concentrate at the gym, listing three albums in particular: A$AP Rocky’s At. Long. Last A$AP, Drake’s If You're Reading This It’s Too Late, and Big Sean's Dark Sky Paradise. And in an interview with New York Times, it was revealed that Jordan spent a year preparing for his role as Adonis, putting on 24 pounds of muscle for the role. So yes, it's really all him you see in the film; director Coogler said Jordan fought real fighters and had no body doubles in Creed.

"That was him taking real punches," Coogler told the Times. "That was all Mike." According to the director, that meant that Jordan was "routinely bloodied, bruised and dizzy." Ouch! To help his body recover from the intensity, the actor told the Times that he took ice baths and did a very frightening-looking Chinese therapy known as Gua sha.

Luckily, Jordan wasn't alone. He got by with a little help from his friends (well, trainers).

And even studied big-name boxers like the legendary Floyd Mayweather, Jr.:

It's safe to say Jordan's journey from regular hottie to extra buff babe was no joke, but all of his hard works seems to have paid off to create one exciting film. Creed opens in theaters Nov. 25, which is pretty incredible timing, because what better inspiration is there to help us get out of our post-Thanksgiving food comas?