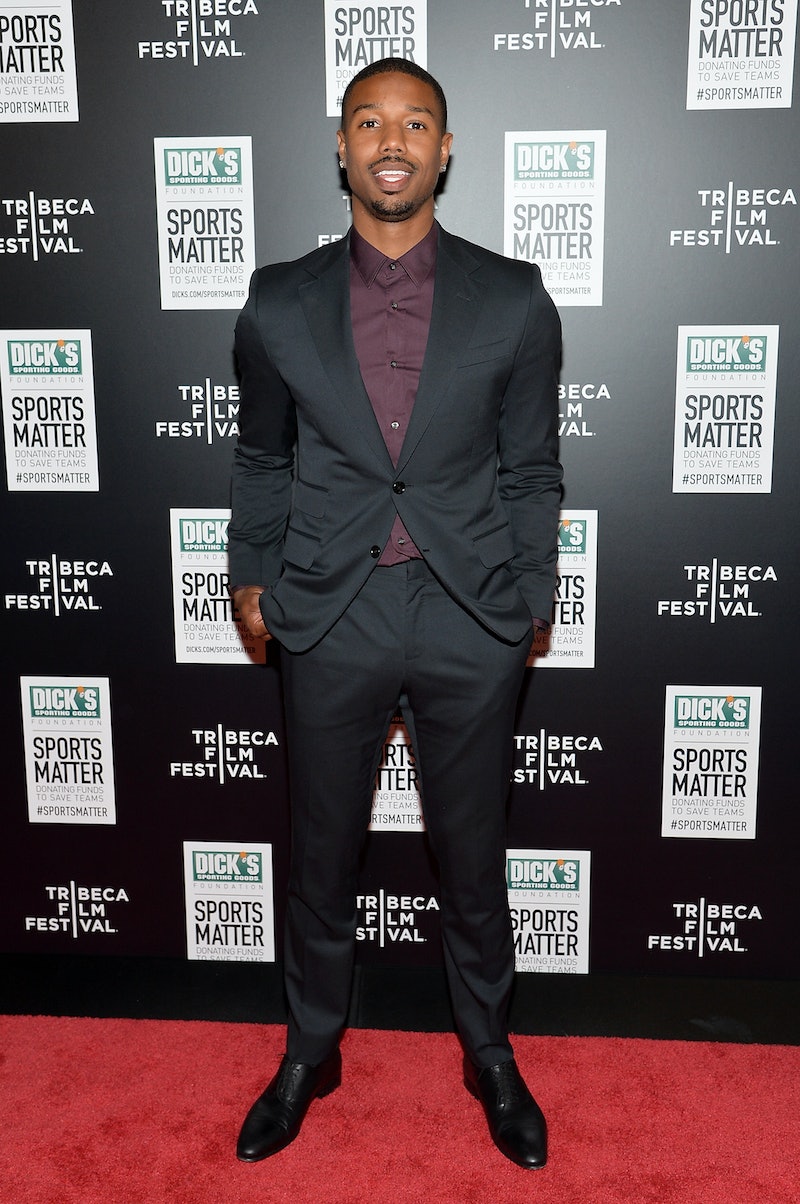 When asked how he is, Michael B. Jordan has a simple response, "I'm doing amazing." The 27-year-old actor has every reason to feel that way. After receiving a ton of critical praise for the award-winning Fruitvale Station last year, Jordan starred in the comedy That Awkward Moment, and was recently cast as Johnny Storm in the Fantastic Four reboot. Now, Jordan hopes to use that success to give underprivileged children access to something that shaped his life (and, as Friday Night Lights fans can attest, career): sports.

"I don’t really like getting involved in too many things, but [sports is] something I can relate to, something that really influenced and helped me out during my life," says Jordan, who is working closely with Dick's Sports Matter initiative, which raises awareness and money to help young athletes and teams in need. "Organized sports teach you a certain amount of core values, as far as being disciplined, work ethic, being a team player, putting yourself last, being humble, humility, which is such an important thing to have, especially in this entertainment industry and just as a person, period."

Growing up in Newark, Jordan became involved in many different sports teams, where he learned those same values and skills that he still utilizes as an actor. He also started acting at a young age, landing his first major role on The Wire at just 15 and joining All My Children one year later. But Jordan's two interests really came together with We Could Be King, a documentary that premiered at the TriBeCa Film Festival on Wednesday. Produced by the Dick's Sporting Goods Foundation, it tells the story of two rival Philadelphia high schools forced to combine due to budget cuts, a story Jordan thinks is important for people to see.

"When they blend sports and film together with the documentary, We Could Be King, it’s right up my alley," Jordan says. "The TriBeCa Film Festival is one of the most prestigious film festivals there is, and this documentary is really heartfelt. You take two rivals and you put them on the same field and you’re gonna get a lot of animosity, but at the same time there are a lot of obstacles for them to overcome, they’re gonna come closer. That’s kind of what the film focuses on."

The story might sound familiar to fans of Friday Night Lights, the drama series that Jordan starred in from 2009-2011. Like We Could Be King, FNL seems like the perfect blend of Jordan's two passions, though football isn't what drew him to the show.

"Friday Night Lights was just an incredible show, the writing was great," he says. "We could’ve been playing table tennis instead of football and I would’ve done the show. I think the fact that it was around organized sports and football was just the icing on the cake."

And while The Fantastic Four doesn't have anything to do with sports, Jordan thinks his athletic background will be very useful as gets ready to play the Human Torch. "I’m pretty athletic, I work out, I’m in shape. It’s definitely gonna help when I’m up on those high wires, flying around. All the core exercises, and then I’m training as well. It’s definitely going to give me a little bit of an edge when it comes to shooting."

The rest of the Fantastic Four cast includes Jordan's That Awkward Moment costar Miles Teller, Kate Mara, Jamie Bell, and Toby Kebbell, most of whom Jordan had already known. It will also be directed by Josh Trank, who Jordan previously worked with in 2012's Chronicle, a sort of twist on the superhero film.

"This is a small industry, we all kind of know each other," Jordan says. "Obviously I’ve worked with Miles before. I know Josh Trank, and Kate Mara, we have a lot of mutual friends, and the same thing with Jamie Bell. The only one I haven’t met is Toby Kebbell, and I’m looking forward to meeting him and the rest of the cast."

It may actually be a good thing that Jordan and Kebbell aren't friends, since Kebbell will be playing the film's villain, Doctor Doom. The 2005 Fantastic Four film, in which Captain America 's Chris Evans played the Human Torch, also featured Doctor Doom as the villain, but there is much more separating the two films than their casts.

"Honestly, this is going to be a grounded superhero film," Jordan says. "It’s very character-driven, action, but I think the key to this film is it’s gonna be grounded. It’s gonna be as relatable as a superhero sci-fi film can be. I think that’s very important to get people to kind of buy into this larger-than-life, larger than this world environment and story."

There's not much more Jordan can say about The Fantastic Four — when asked, he jokingly says, "Yeah, you already know I can’t talk too much about, you're trying to get me fired girl." Though he quickly laughs and clarifies, "I’m just messing with you,” there aren't any more details he can share. Nor can he say much about the rumors about his possible casting in Independence Day 2 and Star Wars: Episode VII.

"Ummm, no?" he responds, laughing, when asked if those roles were still being discussed. "It’s when you’re going in for an interview for any type of job, they go through the process. It’s something that, if it comes up then great, but if not that’s cool too, you know?”

It's not likely that many other young actors know what it's like to be considered for so many huge, highly anticipated roles. In addition to The Fantastic Four, Jordan is set to play Apollo Creed's grandson in the Rocky sequel Creed, and Fox recently bought the script Men Who Kill to build around him.

If sports played even a small role in that success, it says a lot about their impact — though Jordan credits them with much more.

"I think organized sports for me, kept me out of trouble, kept me busy. Like I said the work ethic, honesty, being confident in yourself, being a team player. These are all things that you use in your every day life and being focused," he says. "Even when it comes to studying your lines or being prepared, whether it's for an audition or knowing my lines on set, it’s really helped me become the guy that I am today."

If sports can help shape Jordan into Wallace, Vince Howard, Oscar Grant, Johnny Storm and the many other characters he has and will portray, there's no telling what they can do for other kids.

To get involved, visit the Sports Matter website to donate to the over 200 teams in need and be sure to watch We Could Be King when it airs on ESPN 2 on Saturday, April 26 at 8 p.m. Check out the trailer below.

More like this
8 Epic Must-See Moments To Relive From The Lionesses’ Euros Win
By El Hunt
Lewis Hamilton Turned Down A Role In 'Top Gun: Maverick' For This Surprising Reason
By Darshita Goyal
Everything To Know About The Musical 'Joker' Sequel – & Lady Gaga’s Role
By El Hunt and Sam Ramsden
Stephen Graham’s Wife Plays A Vital Role In His Career
By Emma Madden and Sophie McEvoy
Get Even More From Bustle — Sign Up For The Newsletter