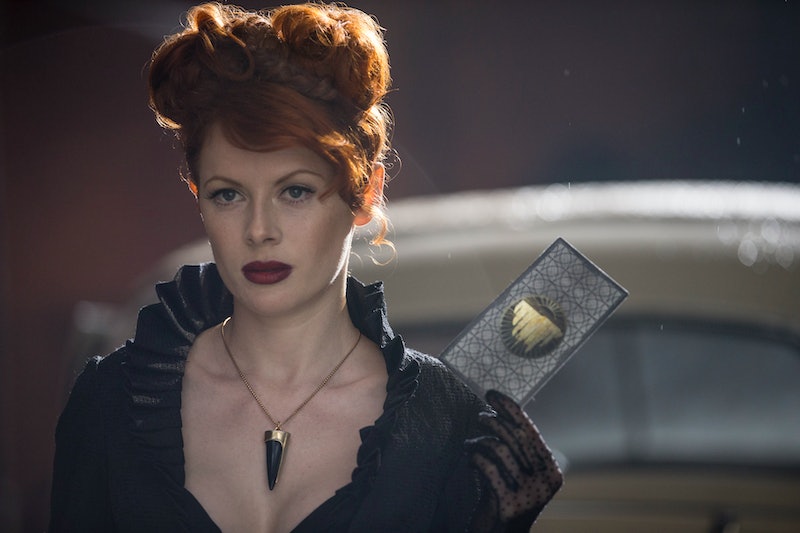 Every story worth its salt needs a good villain to keep things interesting. Game Of Thrones has the Lannisters. The Walking Dead will soon have Negan. And AMC's new martial arts drama Into The Badlands will introduce us to the Barons. The series takes place in an indeterminate future, where a post-American civilization called the Badlands is divided into feudal societies ruled by seven autocrats knows as Barons, each with an army of fierce assassins — or Clippers — at their command. The newest of these Barons is known as The Widow... and she's one of a kind.

Our protagonist, Sunny (Daniel Wu), is the Head Clipper — or Regent — for Quinn (Martin Csokas), the Badlands' most powerful and feared Baron. Sunny also serves Quinn's shrewd wife, Lydia (Orla Brady), and his arrogant son, Ryder (Oliver Stark). Quinn's symbol is an armadillo, to represent his impenetrability, and he controls the society's opium supply. But as terrible as this trio is, they're no match for The Widow (Emily Beecham) when it comes to villainy.

The Widow is the newest Baron around — and the first female Baron in the history of the Badlands. She recently came to power when her Baron husband died under mysterious circumstances. "It is rumored, correctly, that she murdered her husband," the show's official site comes right out and says, "but few know the story behind her act." Her symbol is a butterfly, "representing a transformation from insignificance to beauty and power," and she controls the Badlands' coveted oil reserves.

Instead of the usually Baron's band of Clippers, The Widow has surrounded herself with an army of female warriors she calls her Butterflies. Chief among them is 16-year-old Tilda (Alexia Ioannides), her fiercest assassin. Together with her Butterflies, The Widow has launched a campaign against Quinn. But before you go assuming that she's acting altruistically to take down an evil patriarchal villain, know that The Widow only has her own interests at heart. With "grand ambitions" to become the most powerful Baron in the Badlands, The Widow is seeking a secret weapon: a boy named M.K. (Aramis Knight).

Saved from ruthless nomads by Sunny, M.K. is harboring "a dark energy that is only unleashed when his skin is cut." The Widow wants to use this power to her advantage in her way against Quinn — but how will her goals be complicated by the budding relationship between Tilda and M.K.? Where does our protagonist, Sunny, fit into all of this? And just how badass will the Widow prove to be? Very, if this clip from the pilot is any indication. (Warning: graphic violence.)

The Widow's portrayer, Emily Beechum — an English actress who will likely be unfamiliar to American audiences outside of a small role in the zombie film 28 Weeks Later and a one-episode guest part on FX's Damages — had to train intensively for her role as a martial arts expert. She described the strenuous process at the Television Critics Association summer press tour:

We did we had a five-week training before we started, which was grueling, but great. We start at 9:00 a.m. and did stretches and learning Shaolin Kung Fu, and wushu, and they kind of design the fights around our strengths. So they got to know us better for five weeks and what we were good at. And I’d done a lot of ballet and yoga, so I was flexible before, but I had to build my strength because things like back bends, all that sort of stuff is really difficult if you’re not strong. So I had to improve on that, and, yeah, they choreographed it, and [Master] D.D. choreographed it around our strengths. So we’re pretty much doing, yeah, most of it. There’s wires here and there, which help us with some of the things I can’t do on my own. I can’t do back flips onto bars on my own.

It's still somewhat hard to tell whether we'll love The Widow, hate The Widow, or love to hate her. But one thing seems certain: we'll have a blast watching Beechum play her.

Into The Badlands premieres on AMC this Sunday at 10:00 p.m. ET.