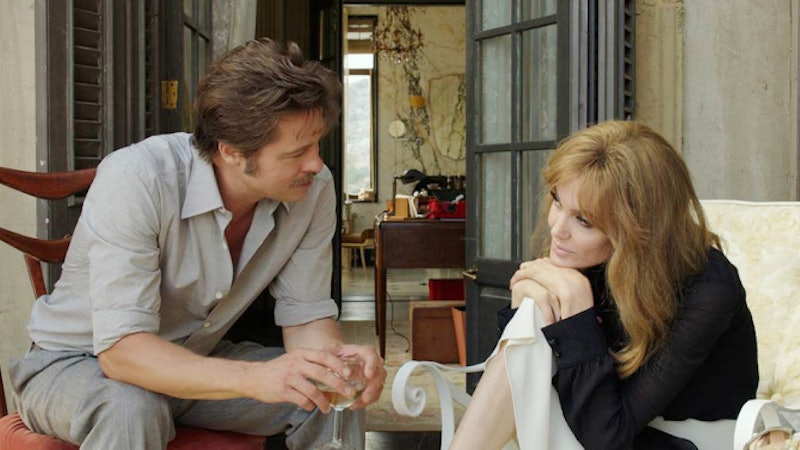 Let's be honest here: when I first heard a year or so ago that Brad Pitt and Angelina Jolie Pitt were making a movie together, I was excited for primarily one reason: they are a really, really, ridiculously good looking couple. Like the rest of the world, I adored every moment of watching them fight and fall in love in Mr. and Mrs. Smith back in 2005, and so the idea of a follow-up seemed too good to be true. As more details about the Jolie Pitt-directed By the Sea came out, I got increasingly intrigued, but if we're being real, I still was more focused on the Brangelina sex scene that I knew By the Sea would contain (it had to, right?) than by the actual film itself.

Fast forward to today, and I've seen By the Sea, in all its Brangelina-filled, Europe-set glory. By and large, the movie was exactly what I expected: a fascinating if too drawn-out drama, filled with gorgeously filmed shots and attractively mustachioed-Brad Pitt. And, of course, as I — and everyone — had figured, there is a sex scene between Pitt and Jolie Pitt, plus several other moments of deep kisses, intense glances, and even a short bit set in the shower. But what I didn't expect, what I probably couldn't have, is that sex in By the Sea is not about, well, sex. It's about longing, and desire, and fear, and curiosity, and rage, but sex? Not even close.

Let me back up: for those unaware, the crux of By the Sea is that a long-married couple, former dancer Vanessa (Jolie Pitt) and writer Roland (Pitt) travel to France in an attempt to heal their trouble-plagued relationship. Although the specific issues aren't revealed until the film's end, it's clear that their marriage is suffering less from one particular problem, but a range of them. Vanessa is distant and uncommunicative, reliant on medication and harboring enormous pain. She's flighty and frail, barely able to form sentences and flinching at her husband's touch. Roland, meanwhile, is sturdier than his wife, but with a bad temper and alcoholic tendencies. He drinks to get away, blows up when he's provoked, and while he acknowledges that he needs to change, he never follows through. Yet despite their issues, it's evident that the two do still love each other, although they have long ago lost the ability to show this in any real way.

So intimacy, by and large, is out of the question. Although they sleep in the same bed, it's implied that Vanessa and Roland haven't had sex in a long time, due primarily to her choices; the few times, early on in the film, that Roland attempts to initiate contact, Vanessa shies away with what looks like genuine fear that her husband cannot understand, albeit less due to his own fault than her absolute unwillingness to communicate. He pushes her more than he should, only increasing her resistance, and at one point, when she's in the shower and he wants to join, he flies into a terrifying, if brief, rage that drives an even bigger wedge between them. For much of the movie, sex (and the intimacy surrounding it) is primarily something that Roland wants, but Vanessa, for a multitude of reasons — fear, anger, lack of control — refuses to give.

Yet about halfway through, things begin to change. Vanessa begins to spy on the newlyweds staying next door, watching them have sex through a peephole connecting their rooms. She's fascinated and even turned on by their spontaneity and passion, but when Roland discovers what she's doing, she's nervous; will he judge her for being perverse? But to both of their surprise, he soon joins in, and as they watch the couple interact, they, too, become closer, bonded by their mutual curiosity for another couple doing what they cannot. Their reasons for spying are different; Vanessa seems truly obsessed with watching the neighbors, while Roland simply realizes that joining Vanessa in this act will deepen their relationship, but the outcome is the same — watching the newlyweds causes Vanessa and Roland to connect on an intimate level.

And while it's not all happiness from there — Vanessa's insecurity causes her to lash out at Roland, and his anger makes him intolerant of her moods — they do, eventually, have the mutual desire for sex. While Vanessa is in the bathtub, Roland narrates the newlyweds' actions, clearly turning both of them on; yet even as he edges closer to his wife, he watches her expressions carefully, for signs she has changed her mind. It's a long, slow process, and by the time they do finally have sex — Vanessa naked in the tub, Roland on top of her in his wet clothes — it's only because they both understand that it must happen now, not a moment before or after.

But of course, it is, by definition, a sex scene, and it's fascinating to realize that Jolie Pitt, as writer, director, and star, was the one responsible for every aspect of its design and function. It was she who determined how and when the characters would have sex, what it'd look like, and, most crucially, that Vanessa should be naked, showing Jolie Pitt's post-mastectomy, reconstructed breasts. This matters enormously; by having total control of the film's depiction of nudity and sexuality, Jolie Pitt ensured that By the Sea's sex scene was about so much more than ogling a naked celebrity or watching a real-life couple fool around on-screen. She made it so that Vanessa's nudity represented her vulnerability with her husband, and was thus not sexy, but indicative of her fears and insecurities.

The way the scene is shot only adds to this; unlike so many sex scenes filmed by and for men, By the Sea's scene doesn't feel like it's done in the male gaze. Yes, Vanessa is the only one naked, but as said, her physical state is simply used as a representative of her emotional one, and not meant to be viewed for its beauty or sexiness. Jolie Pitt is one of few women to direct sex scenes in cinema — women directed just 7% of the top 250 films of 2014, according to a study by The Center for the Study of Women in Television and Film, and so it can be assumed the number of female-directed sex scenes is significantly lower — and as such, her handling of By the Sea stands apart. It shows a beautiful nude woman having sex not as something to ogle, but as something to appreciate for all the things it represents.

By the Sea is a traditional love story in many ways; its central couple starts out apart, and slowly, not easily, they find their way back together. But in the way it handles sex, it is unlike so many of its peers. It takes an act that could be viewed in its most obvious form and presents it in an entirely different way, transcending cinema's norms when it comes to sex scenes and the way women — their bodies, their emotions — are seen on-screen.