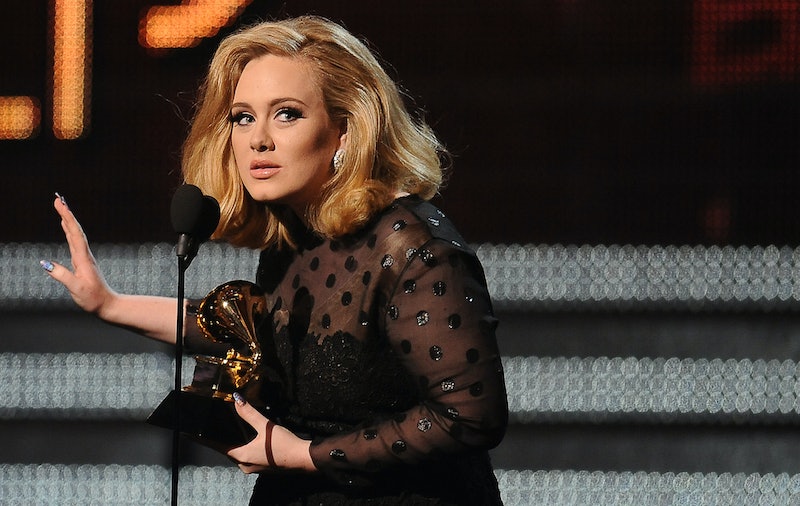 After a seemingly interminable hiatus, Adele finally released her comeback single, "Hello," at the end of last month, and not a moment too soon. We were getting desperate, but the track was well worth the wait and the video was just as amazing. Shot in gorgeous sepia by director Xavier Dolan, the experience was responsible for making the singer interested in acting, and now it seems like Adele might star in Dolan's The Death and Life of John F. Donovan, a feature length celebrity satire film. Nothing's official just yet, and Adele's role would only be a cameo, but her crossover to the film world would be an amazing move, and one that her millions of fans would welcome with open arms. I know I would! My only question is, what took her so long?

Plenty of singers and actors do both, and why shouldn't they? If you're talented in multiple areas, there's no reason not to explore both art forms and grow as an artist. In Adele's case, she's always seemed like such a natural in every sense, and I can't imagine she wouldn't be amazing in some beautiful artsy dramas, or even a comedy. Basically, there are several movies that have come out over the past several years that Adele could easily have starred in. If they're ever remade, I'd cast her right away.

I love Carey Mulligan and think she was great in Drive, but I think Adele could have done an amazing job with the part, as well. It's dark and gritty and has just the right amount of drama to it that Adele would have nailed.

Cinderella in Into The Woods

Again, Anna Kendrick was amazing, but Adele as Cinderella? Can you even imagine how amazing that would be? She sings, she could totally pull off the princess thing, and the whole arrangement would just be A+.

Queen Victoria in The Young Victoria

It pains me to re-cast this movie because Emily Blunt is MY queen, but you can't deny that Adele playing Queen Victoria would pretty much make your life. That tragic and beautiful romance would just be stellar to watch her play out — like a 2-hour long "Hello" video, and who could argue with that?

Skeeter Phelan in The Help

I'm not sure how Adele is with accents, but something tells me she could take on the role of Skeeter (played in the original movie by the delightful Emma Stone) with ease.

June Carter in Walk The Line

It's natural to want to put Adele into a music movie — it just makes sense. Seeing her play June Carter Cash would be one of the greatest things in my life and I think she'd knock it out of the park (no offense to Reese Witherspoon).

Kate Winslet is pretty much my favorite living actress, but her role in Divergent never quite made sense to me. I'd love to see Adele play an underhanded governmental mastermind, however. Would that make sense? Maybe not, but I'd like to give it a try.

This remake should never have been made and was an absolute disaster, but I'd watch it all over again if Adele was playing Miss Hannigan. I'm begging for it!

Whether or not Adele ever launches an actual acting career, there are plenty of roles out there that will be perfect for her if she does. I'm all for it, I know that!