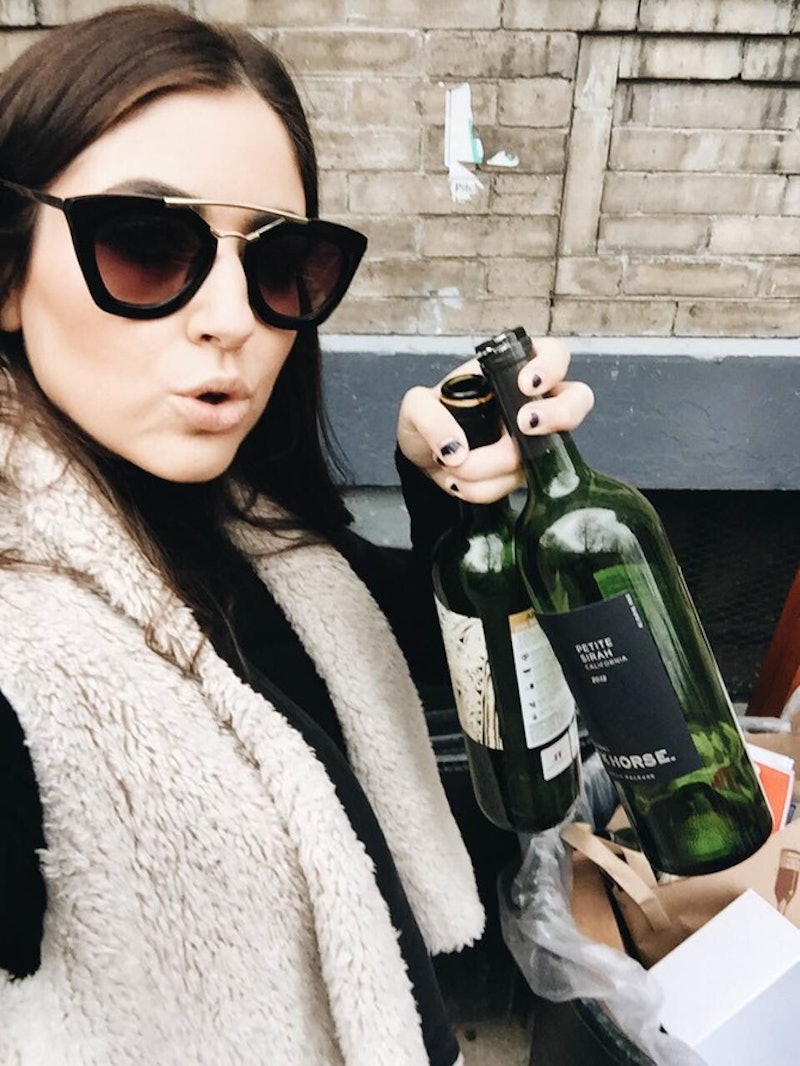 I've tried to watch the Real Housewives. I watched the series that takes place in L.A. with all the blonde ladies and Lisa Rinna's lip blimp. It was weird. I generally only like reality TV if it involves cooking, being naked and/or afraid, and anything with the words "amazing" and "race" in it, preferably next to each other and preferably in that order. I pretend I don't keep up with the Kardashians, but I get most of my information from the show's commercials and Internet gossip rather than watching it week to week because I'm allergic to excessive vocal fry. I did once got lost in a Mob Wives vortex, which is the year I went as Drita D'Avanzo to Halloween (which definitely had a lot to do with my Adriana La Cerva/Drea de Matteo obsession), but The Real Housewives series has, for the most part, eluded me. From what I can tell, the Bravo standby seems to be a mix between the Kardashians and the mob wives: Everyone is very rich and speaks in an exaggerated Valley Girl drawl, but they also occasionally throw down and brawl. (I totally did not intentionally rhyme that sentence, but I'm just going to roll with it).

Despite my limited experience, when my editor asked me to spend a day living as a Bravo-style Real Housewife, I was all about it. I pretty much am one already, just a lower middle class one who lives in Queens and isn't actually married, although I do live with my boyfriend. I work from home, which is great for anxiety-free morning poops, but that's where my likeness to any real housewife ends — although I did throw my fake leg at someone once. OK, that was a poor taste joke — I've never done that, although in high school a mean girl told me my hair was ugly, so I threw a full can of soda at the back of her head when she walked away. (She's fine.) What did I tell you? I'm total Real Housewife material.

A typical day in my life looks like this: I get out of bed, throw sweats over whatever t-shirt I slept in, wear that until I finish working and change into my gym clothes, go or not go to the gym or yoga, come home/give up on exercise, shower, and change into my "nice" sweats for when my boyfriend gets home from work (I'm keeping the magic alive, guys). I almost never wear makeup or do my hair. Here's how you'll find me looking on any given day:

But today I'm living life like a REAL Housewife, not some fake wannabe freelance writer housegirlfriend, so here we go...

Being a real housewife seems to have a lot to do with how you look. I decided to do my make-up like Lisa Rinna because when I was a kid and it was the school holidays, my mum would leave me at my grandparents' house and my yiayia and I would watch Days of Our Lives, so Lisa and I go way back. Also, I love how serious she is about cake.

I have never worn this much make-up. Even for a night out, my make-up routine is a ten-minute affair. I wear tinted moisturizer, concealer under my eyes, a little shimmer under my eyebrows, mascara, and the same lipstick on both my lips and as blush on my cheeks. Meanwhile, I own things like eyeliner and bronzer because I go through phases where I think I could be a make-up girl or I'm at Sephora with a makeup-loving friend and I get excited and confused and wind up buying things that I don't know what they do. Either way I never feel comfortable with the feeling of heavy make-up on my face, or forget I'm wearing it and end up smudging it up my forehead somehow. Here's my clumsy impression of Lisa's make-up:

To be honest, wearing this much makeup makes me feel really uncomfortable and self conscious, more so than wearing no makeup. I also hate the "nude lips" look, which is probably conditioning from at least a decade of my mother telling me to "put on some lipstick." I think I like looking at women wearing excessive makeup a lot, but I'll never be the kind of woman who enjoys wearing it. I wonder if there's a makeup-free Real Housewives contingent I could join...

I went with Brandi Glanville hair for the experiment, because the wavy, parted in the middle style is normally how I do it for a night out. I also enjoy pizza. (Can you see a theme emerging for my favorite Real Housewives quotes?)

I might not be a master of makeup, but I've nailed the hair straightener. That is to say, I can do two things with it: straighten my hair, or do light waves. Which I'm pretty sure is the main repertoire of the straightener anyway. The makeup might be stupid, but I'm loving myself sick in this hair:

My wardrobe is notably absent of anything real housewifey. I don't wear jewelry, so I don't have any huge sparkling chandelier earrings which seem to be a daily staple for the Real ladies. I also have to keep in mind that I'm going to have to walk through my neighborhood in this outfit, and considering I was once in my sweats picking up dog poop and a man pulled up in his car to ask "How much for a blowjob," I'm apprehensive about wearing anything too revealing, or generally being on the street at all. But if I'm going to think and live like a Real Housewife, I have to live as my most authentically fabulous self. Never say die when it comes to glamour. It was cold the day of the experiment, which is something the Real Housewives of L.A. don't have to deal with, so I turned to the New York Housewives for inspiration.

Turtle-necks galore! Jeans, heels, and fur (in my case, shearling) it is. Add some dark sunglasses to say to everyone "I'm more chic than you," and an animal print handbag held in the crook of the elbow for good measure:

Every good Real Housewife has a motto they live by/for their promo spot:

I figured if I was really going to commit to the Real lifestyle, I should come up with my own. Here it is:

I said it to my boyfriend and he choked on his own spit laughing. So I guess my persona is "The LOL Housewife."

I was supposed to have brunch with a girlfriend to chat about useless sh*t like what someone said to someone else about their uncle's pet dog, and generally make gigantic, dramatic mountains over innocuous molehills, but my friend cancelled at the last minute because she accidentally cut her hand open with a knife. Real Life me is concerned and sympathetic, although I'm fairly certain that these are traits Real Housewife me should not display. If I did, the other Housewives would smell my weakness, and pop my breast implants while I slept. And I don't even have breast implants, so they'd just be stabbing me in the tits. So I did what any self respecting Housewife would do and bitched about my friend (who I love) in a confessional video diary:

I mostly felt VERY uncomfortable calling my beautiful friend a "b*tch" (which is a word I try really hard not to use unless someone really, really deserves it). Keeping a straight face was also hard, and I had to do six takes before I got one that didn't have me dissolving into laughter half way through. The lesson here: video confessionals are a difficult business.

A regular day for me always involves a trip to the supermarket for food. Fresh fruit and vegetables go bad so quickly in this country I like to work on a "buy as you need" basis. Today, I'm flush for food, but I need to buy a few household cleaning products, so I'm taking a break from work to head down the street to the 99 Cent store. Normally, I would do this in my sweats or workout gear, makeup free, potentially (read: definitely) un-showered. Today, I'm doing it like the Queen that every Real Housewife should be. Here I am taking out the only recycling a Real Housewife should have, last night's empties, on the way out:

Meanwhile, things got interesting at the 99 Cent store. I'm like a bull in a China shop at the best of times, but add a cumbersome furry vest and high heels to the situation, as well as the need to take near constant selfies and fix my hair (which means one less arm/hand for holding things), and shopping for household products becomes a risky business. I managed, although I wouldn't want to make a habit of running errands so glamorously.

7. How Does It Feel To Be A Real Housewife?

Not great. I am a low drama, high mobility type of person, so living a lifestyle in which I'm forced to overreact to things and look glamorous 24/7 is highly unsuitable. I'm the kind of woman who wonders how many times I need to fart into my sweats for the smell to finally sink into the fabric, not the kind of woman that gets stressed out over flower arrangement and gossip. In fact, I make a point of avoiding drama queens in my friendships. And although I do hate wearing so much makeup, I love doing my hair and wearing heels, although having to wear them in an everyday scenario on the broken concrete sidewalks of Queens when it's been raining takes the fun out of it, and makes me not want to wear them at all. So I really would make a very terrible Real Housewife. I do, however, make a pretty good Regular Old Stinky Housegirlfriend, and I'm happy enough with that. If anyone wants to franchise that title, get at me.