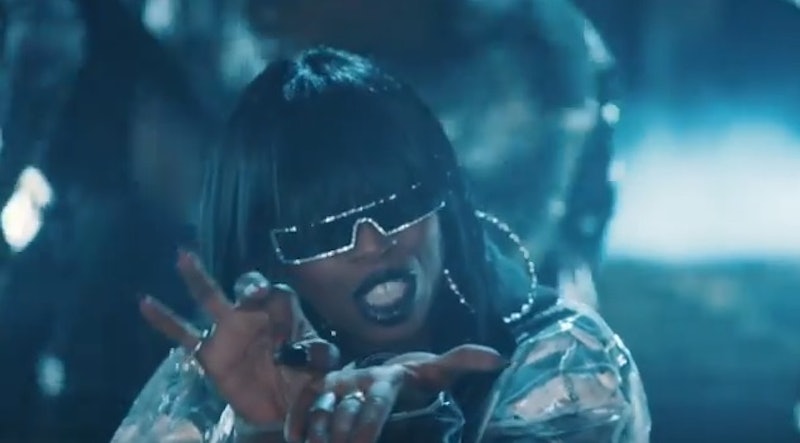 Thursday is a great day in musical history. Because, hey, guys, guess what — Missy Elliott just released her "WTF" video, and it is going to blow your mind. After lots of social media teasing, Elliott dropped her empowering, dance heavy video of awesomeness and, yes, it is everything you were dreaming it would be. Even if you weren't actively dreaming about it, "WTF" has an undeniable wow factor that comes from Elliott's confidence and ability to bust the kind of moves most artists know better than to even attempt to try. "WTF" is an anthem of sex positivity, bold fashion choices, and unabashed confidence from an artist who has been in the business of making unforgettable videos since the '90s.

"WTF" delivers one moment of cool after another as Elliott weaves killer dance moves with lyrical magic and a background full of neon goodness. This is how you make a music video, people: with attitude, substance, and style. Choosing the most "aww, yeah" moments from the video is like trying to decide between ice cream and cake — you know you want it all, but there are nine standout moments that will make you want to bow before Elliott and honor her as the Khalessi of your heart (sorry, Dany).

1. When She Predicts The Future

The video opens with people singing "WTF" on their commutes, which is a thing that will be happening by this afternoon. BAM, Elliott is a psychic. Actually, she's better than a psychic, she is just confident in how freaking talented she is.

2. When She Rocks This Outfit

I'm sorry, is your lipstick made out of crystals? Nope, because only Elliott is hardcore enough to pull that magic off.

3. When Her Choreography Is Flawless

There has been a major drought when it comes to creative dance moves in music videos lately. Leave it to Elliott to put as much energy into the choreography as she does in the song, because this woman is a class act who gets what makes videos worth watching. Can she just get her VMA now?

4. When She Gives Notice That's She's A Big Deal

Elliott is so fierce in this video. She basically lays it out that whatever dude wants to get with her needs to understand her inherent epicness. That is the kind of musical message I can get behind.

I am going to go ahead and declare this the coolest move in history. One turn and not only does Elliott change mid-song, but she gets neon blue lipstick I will now covet forever.

6. When She Calls In The Ventriloquist Dummies

Yes, that is a Pharrell dummy. Elliott officially wins at life.

7. When She Out Lens Flares J.J. Abrams

Move over Abrams, Elliott just made lens flares her game. This moment is so futuristic, and yet simple in its gorgeousness that I cannot even deal with how amazing it looks.

8. When She Suddenly Goes Full On Dystopian Future

I have no idea what the symbolic significance of this Matrix-esque moment is, but it looks like a dystopian nightmare you probably wouldn't mind being in because Elliott is there jamming with you.

9. When She Just Starts Chilling

At the end, Elliott is just chilling and surveying the kingdom that is "WTF," and, oh, is it good.

Not convinced "WTF" is your new life anthem? Check out the video below and prepare to become obsessed with everything Elliott chooses to be.