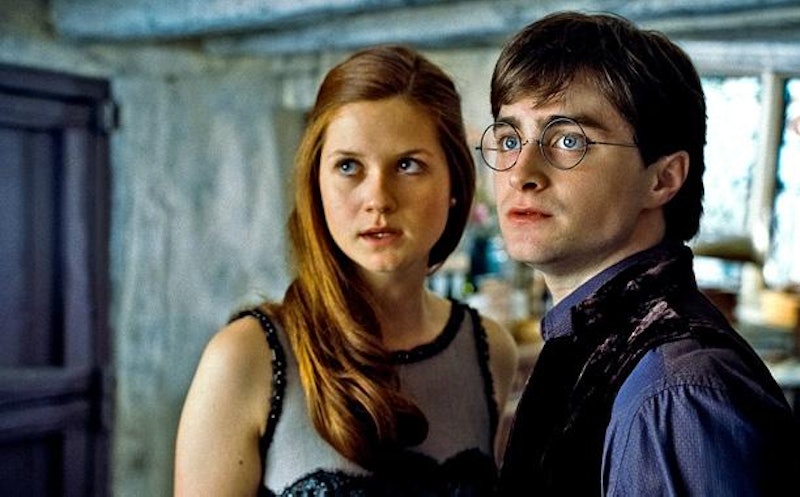 Yes, Harry Potter is full of magic and mayhem and the eternal struggle of good vs. evil and all that jazz, but J.K. Rowling understood what her hormonally-charged young readers really wanted to read about. Snogging. And lots of it.

Harry Potter brought us some of the greatest literary couples of our time, as well as some of the absolute worst. I mean, Ron and Lavender Brown? Harry and Cho Chang? Hermione and Cormac McLaggen? Hogwarts may have existed in some fantasy world where everyone ends up marrying their high school sweetheart, but at least there were plenty of genuinely awkward teenage flings to balance everything out.

Even if every couple didn't pan out quite as we hoped (Neville + Luna 4ever), there are so many romantic moments that will warm your insides like you've been chugging butterbeer:

1. Wake up and Smell the Love Potion

Amortentia, as we all know, is the strongest love potion in existence. I may not produce actual love, but it has a different aroma for everyone who smells it: the scent reminds everyone of what they love most in the world. For Harry, it's treacle tart, the scent of a broomstick handle, and something flowery (which, of course, turns out to be Ginny's perfume). For Hermione, it's fresh cut grass, new parchment, and... something else that makes her blush. We can only assume that Harry's not the only one with a Weasley on his mind.

OK, I know I listed them as one of the worst couples in the series, but a cute first kiss is a cute first kiss. It was under the mistletoe and everything! Harry managed to somehow bring nargles into a romantic situation! What's not to like? After several books' worth of build up, it was pretty satisfying to see Harry and Cho get together, even if we knew it wouldn't last. Because poor Cho was still dealing with feelings for Cedric, and Harry was a teenage boy with a limited emotional range. Oh, well.

3. Viktor Krum is Kind of a Stalker

Hiding out in libraries to stare at cute girls is, in general, a pretty creepy move. I do not recommend trying it at home, because the only person who could possibly pull it off is international Quidditch champion Viktor Krum. As far as mid-series couples go, Hermione and Krum were one of the best. I mean, he hung out in the Hogwarts library for weeks trying to find the courage to ask her out. That's pretty adorable, even if they weren't meant to be together forever.

Hermione's not usually one to play dirty, but apparently she'll make an exception for Ron's sake. During Quidditch keeper try-outs in their sixth year, Hermione used a well-placed Confundus Charm to make sure that Ron would best Cormac and make the team. It's not your traditional candlelight-and-flowers kind of romantic moment, but sticking to The Rules has always been a big deal for Hermione, and she wouldn't cheat unless she really cared about Ron's happiness. (Never mind that she later asked out Cormac just to make Ron jealous.)

5. Fleur Loves Bill No Matter What

Bill and Fleur aren't necessarily everyone's favorite couple (Molly and Ginny, especially, aren't huge fans of Phlegm). But you've got to admit that their love is strong: after Bill is attacked by Fenrir Greyback, Molly assumes that Fleur will no longer want to marry him, now that his face is heavily scarred. Fleur, however, is proud of her husband's scars — it only shows how brave he is. Besides, she's good-looking enough for the both of them, and she knows it.

Sometimes it's hard to remember that before Ginny was a cool and sporty heartbreaker, she was Ron's shy, dorky little sister. And poor little Ginny had a crippling crush on Harry long before he cared about girls at all. At the time, her Valentine poem seems silly — she compares Harry's eyes to a fresh pickled toad, after all. But she was only 11, and looking back it's a sweet, wildly embarrassing start to one of the series' central romances.

This is another goofy romantic moment, but still oh so cute. In the midst of Yule Ball frenzy, when all the Hogwarts boys are desperately seeking anyone to go to the ball with, Fred Wealsey demonstrates that romance doesn't have to be so hard by simply chucking a ball of paper at Angelina Johnson and asking her out. And she says yes. Awww. (Now just try not to think about the fact that she goes on to marry his twin brother after his untimely death.)

8. Tonks Has a New Patronus

Lupin may think that Tonks deserves someone better, but she wants him. That moment when Harry finally understands Tonks' new, wolfish Patronus, and Tonks tells Lupin that she doesn't care how poor or dangerous he is, and that she loves him anyway — well, it's pretty hard to top that.

I am not #TeamSnape in any way, but he's pretty unavoidable when you're talking about Harry Potter romances. His unrequited love borders on creepy, and it's no excuse for his prejudice or the fact that he bullies children for years, but yeah, OK, it's still sad and maybe a little romantic when he says that he'll always love Lily Evans.

When they win the Quidditch match, and Harry's already so happy, and Ginny just throws herself at him, and then they kiss without really planning it? In front of the whole Gryffindor common room? And poor Dean Thomas breaks a glass out of shock? I dare you to try and read that scene without feeling all warm and sappy. You can't. It's impossible.

There's so much to love about this kiss. There's the fact that we all had to wait for so long to get here, through all those years of bickering and dating other people to make each other jealous. There's the fact that it's in the midst of battle, and we don't know if they're even going to survive. There's the fact that Harry shuts it down, like the annoying third wheel that he is. But really, what always gets me is that Hermione finally kisses Ron because he's worried about the house elves' safety — showing how much he's grown as a character in the last several books, now that he no longer has the emotional range of a teaspoon. And that makes their kiss well worth the wait.