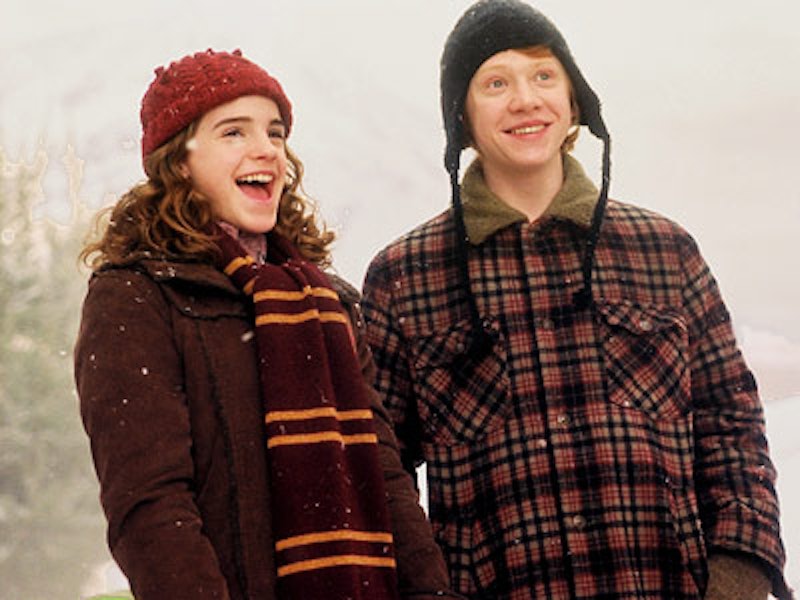 J.K. Rowling seems to really enjoy having millions of fans in the palm of her hand. Every so often she suddenly appears to make an announcement or give an interview that sends the entire fandom reeling. Most recently, she gave an interview to Wonderland magazine, conducted by Hermione herself, Emma Watson, and J.K. Rowling casually stated that she made a mistake by pairing Hermione with Ron.

Um, what? Here we are, six and a half years past the publication of the series' final book, Harry Potter and the Deathly Hallows, and suddenly Rowling decides to take back a part of its ending that had already been developing for years before. Out of nowhere, Rowling claims that instead, Hermione should have ended up with Harry.

Like any fellow Potterhead, I of course worship and respect Rowling, but when it comes to this revelation, I think she is completely wrong. Though Rowling isn't really changing anything by saying this, the books have been printed after all, and there have always been fan factions who share a passion for non-canonical pairings, it still hurts those of us who were thrilled to see Ron and Hermione become a couple.

While Rowling credits "wish-fulfillment" for her original idea of making Ron and Hermione a couple, there is much more holding them together. Sure, Rowling made the characters who they are but that doesn't necessarily mean she knows what's best. Here's why Ron and Hermione will always be a better match than Hermione and Harry.

They Balance Each Other Out

Hermione can be intense—in all the best ways. She deeply cares about others, her future, school and probably later, her work. She's driven and focused and needs to be reminded to have fun every once in a while. Ron is lovably goofy and would rather practice Quidditch than do his History of Magic homework. Though they may have different priorities and approaches to life, it makes them more compatible. Ron is consistently impressed by Hermione's intelligence and magical ability, so he can respect her worth ethic, while stopping her from being too hard on herself.

And it's not like Harry shares Hermione's love of knowledge. He's just as likely to goof off as Ron, but lacks that lighthearted spirit that makes Ron so great for her. Harry may not dedicate himself to books, but he can become completely enveloped in something, whether its a suspicion, his own mistakes or something from the past. Harry also gets too serious sometimes, but in a brooding way and doesn't have that right balance.

For Ron's whole life, he was overshadowed. The Weasley family was always discounted in the wizarding community and even at home his brothers and sister got more attention. While Harry had an awful upbringing, once he got to Hogwarts he was the Boy Who Lived, the Chosen One. Everyone knew him and had great expectations for him. Ron really should have paled next to Harry, but not for Hermione.

Sure when Hermione first met an 11-year-old Ron with dirt on his nose (just there), she wasn't exactly impressed. But over he soon became a trusted friend and as they got older, she realized she loved him in a romantic way, and eventually they both had the courage to admit it. His biggest insecurity was being overshadowed yet again, this time in the eyes of the girl he loved, but Hermione was never impressed by Harry's status and saw both he and Ron for who they really were. For Ron, that's a brave, insecure, caring guy who loved her.

If Harry and Hermione were to end up together, it's just another example of the leading man "getting the girl." It's not that there's any sort of competition between Harry and Ron, and Hermione is clearly given her own agency in being with either of them, but I always found it refreshing for the main hero to not end up with his friend, the smart, beautiful girl. Instead, she falls in love with the other affable friend, and the sidekick gets to be happy too.

He Cares About Her Interests

When Hermione first started S.P.E.W., her club to promote house-elves rights, Ron didn't take her very seriously. Like others, he mocked it. But as he grew to care more for Hermione, he began to care more for her interests and by The Deathly Hallows we see that Ron has become a S.P.E.W. supporter. He treats Dobby (R.I.P.) with respect and during the Battle of Hogwarts, shows concern for the elves who work in the school's kitchen.

It was changed for the movie, but the real impetus for Ron and Hermione's first kiss wasn't destroying a horcrux in the chamber of secrets. As they're preparing to enter the battle, Ron remarks that they forgot about the house-elves. Harry thinks he meant that they should have the elves join the fight, but Ron explains that they should help them get out, before they get hurt. That's why Hermione kisses him. Hermione cares for the elves and so does he. If it's important to her, it's important to him. What besides love could make someone watch another person play the piano like this?

Harry and Ginny Are a Good Match Too

It gets lost in the movies due to reduced screen time and poor chemistry, but book-Ginny is awesome. She goes from Ron's shy little sister with a crush on Harry to a very powerful witch who takes over as leader of Dumbledore's Army when the others leave school, demands to fight in the Battle of Hogwarts and even becomes a professional Quidditch player. She is eager to fight alongside Harry but knows when he needs to face a challenge alone, and can withstand anything.

Plus, if Harry marries Ginny he gets to be part of the Weasley family and after a childhood that alternated between dealing with the Dursleys and fighting the most powerful dark wizard of all time, he deserves to be taken in by a huge, magical, warm family. Then he and Ron get to be brothers-in-law, and Hermione becomes part of the family too. Just imagine the holiday gatherings, matching sweaters and all.

Hermione Got to Name Her Own Children

I'm just saying, Ginny got stuck with James Sirius, Albus Severus and Lily Luna. Absolutely no room for creativity or anyone from her side of the family. At least Hermione presumably had a say in Rose and Hugo. They even match her and Ron's initials.

They just are, okay? Harry Potter is not a love story and it has so, so much more to offer than romance. But somewhere along the way, as seven books told the story of an epic adventure filled with the courage and compassion of three friends, two of those friends fell in love. Rowling may no longer think it was the correct two, but she really got it right the first time. It doesn't matter if Harry is the hero, because as the guy who landed Hermione, Ron is the real Chosen One.