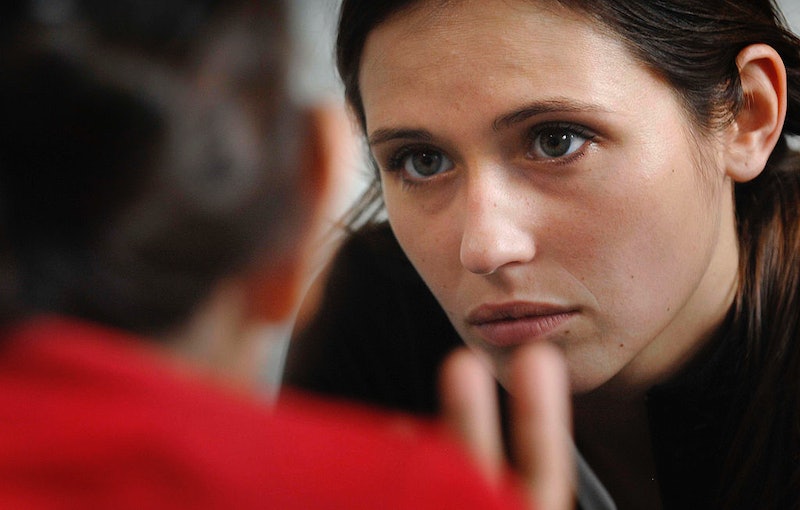 I spent the first minutes of my training as a rape crisis counselor terrified, listening to people more qualified than myself introduce themselves. “I’m a social worker,” one person told the room. The next one stood up: “I’m a family therapist.” Nurses, sex educators, public defenders — everyone around me committed their workdays to helping others, and now they were volunteering their nights and weekends to do the same. We were all there to become emergency-room advocates, on call in local hospitals for survivors of domestic violence and sexual assault.

“I’m a writer,” I told them, flushed. What qualifications did I have to sit with survivors of trauma? How could I learn in one training session what these other volunteers had cultivated over their entire careers?

Five years and countless emergency room calls later, I’m no longer afraid. It turns out that being a good crisis counselor requires social awareness, not professional excellence. After all, everyone, whether she’s Mother Teresa or Kylie Jenner, has felt panic. We’ve all known powerlessness. We’ve all wished for someone else’s support. These reactions aren’t only found after rape or domestic violence; they show up every day in response to arguments, misunderstandings, and stress.

Crisis counselors support people in the immediate wake of a trauma. As an emergency room advocate, I'm with someone for the first few hours after an attack to help with everything from navigating the healthcare system to figuring out a shelter they can stay at that night. My role is limited to one or two 12-hour shifts per month. The position requires caring, commitment, and a willingness to listen without judgment. And interestingly, it teaches things that come in handy in any emergency, whether it's with a stranger in the hospital or with your best friend in her living room.

1. There Is No Justification For Cruelty

Almost every sexual assault or domestic violence survivor says the same thing: "I wouldn’t have gotten hurt if I had [kept my mouth shut, accepted that ride home, avoided that drink]." But rape and abuse are the fault of perpetrators, not victims.

Self-blame is so common because it gives awful situations an easy cause and effect. If you believe that what happened was your fault, then you have the power to prevent it from happening again. This way of thinking shows up after little crises all the time. “My boss wouldn’t scream at me if I were a better employee,” you might say. “Next time I’ll be better.” But your boss shouldn’t scream at you in any case. No action deserves a cruel response.

2. To Calm A Crisis, Restore Security

One of the scariest things about an emergency is that you no longer feel in charge of your own life. That unmoored feeling is exacerbated when the people around you make decisions on your behalf. Rape crisis counselors are trained to let survivors take the lead. I won’t enter an exam room unless the survivor gives permission, for example, and I’ll leave if they ask me to go.

It’s a good principle to keep in mind when talking to friends who are freaking out about something. Your best friend was just fired? Get whatever takeout she wants for dinner. Have her decide what to do next.

Sometimes, your friend is talking and you feel your mouth filling up with unasked-for advice. “Leave that boyfriend!” “Quit that job!” “Stop doing THAT and do THIS instead!” But I've learned that your relationships become approximately two million times better when you swallow those impulses.

It's easy to see the uselessness of fix-it suggestions in an extreme setting like an emergency room. A domestic violence survivor isn't helped by my saying "You should cut off contact with your abuser." That sounds like such a simple suggestion, but navigating the dangers of an abusive relationship is much, much more complicated. I can only understand that if I listen.

So listen. Explore what your friend is saying, and reflect her feelings. If she tells you how work is too tough? “That sounds incredibly hard.” If she and her partner are going through a rough patch? “I’m so sorry. That sucks.”

4. Compassion Is More Useful Than Empathy

Empathy is when you feel someone else’s feelings. For example, a sexual assault survivor is describing their night and gets overwhelmed … then you do, too. They start to cry, and you start to cry. That’s totally understandable — and not very helpful. Try compassion instead.

When you listen with compassion, you feel concern and a desire to take care of the other person. It’s an approach that supports someone, but doesn’t impose on them.

5. Don’t Insert Your Own Life Into Other People’s Traumas

When someone you love is going through a crisis, it’s hard to resist the urge to share that you’ve been there before. Her friend died? Your friend died, too. She’s getting a divorce? You went through a terrible breakup last year.

Moments like these come up terribly often in crisis advocacy, because sexual and intimate partner violence are epidemic — many advocates are themselves survivors. But a new victim of a violent crime needs to have her experiences heard and respected, not used as a jumping-off point for someone else's story. In the first moments of crisis, your loved one doesn’t need to hear about other people’s tragedies.

6. Violence Doesn’t Discriminate, And Neither Should You

Rape and abuse are found in every community. Not all survivors are treated equally, though. Police officers, hospital staff, and even crisis counselors carry assumptions that affect treatment. An authority figure or advocate thinks, “I’ve seen someone like this before. I know how this story ends.”

This approach is actively harmful. It prevents people from getting individual treatment and keeps them from seeking help again. Next time a stranger approaches you, or your partner complains, listen to what they say instead of assuming that you know their conclusion already. You’ll hear something unique every time.

7. Survival Is Itself An Act Of Bravery

Someone who comes to the emergency room after a violent crime is having one of the worst experiences they’ll ever know. They are thick in trauma. At the same time, they are performing acts of extraordinary courage — making it out alive, seeking help, telling their story, deciding how to proceed. Every one of those moments should be recognized. The world is dangerous, and not everyone survives.

If someone you care about navigates past a threat, affirm them. Even if it was small, they're doing difficult work.

8. Just Being Present Helps Someone Heal

This lesson is also known as “showing up.” It's 90 percent of the emergency room advocate's role. I was once called in for a survivor who hadn't slept for more than a day, because immediately after her attack, police and family members stepped in to start investigating. By the time I got there, she didn't want to tell her story again — she just wanted to sleep. So she slept. I read a magazine next to her and made sure no one came in the room whom she hadn't okayed. She could rest knowing that she was safe for those few hours. That was the best way her ER stay could have gone.

9. Your Best Isn’t Perfect, But It’s A Lot Better Than Nothing

Now I mentor new rape crisis counselors in the same program that so intimidated me years ago. No matter their professional backgrounds, these new trainees all have the same question: “What if I do the wrong thing?” They fear hurting a vulnerable person all over again.

When someone comes to you with a crisis, you may not respond perfectly. That’s alright. If you keep these tools in mind — compassion, reflection, reserving judgment — you won’t stray too far from best practice. And if you forget them? Just do your best. Be there, care, and try to be kind. That’s enough to take someone from a nightmare to the first moments of relief after she wakes up.

You can find out more about becoming a volunteer crisis counselor by looking up your state in RAINN's crisis center database or reaching out to your local hospital.

More like this
Black Women's Equal Pay Day Highlights An Upsetting Problem
By Brandi Neal
Women Around The World Are Cutting Their Hair In Solidarity With Mahsa Amini
By Darshita Goyal
10 Ways To Be More Empathetic To Your Partner
By Raven Ishak and Lexi Inks
Think Your Partner Is Cheating? These Tarot Cards May Confirm Your Suspicions
By Kristine Fellizar
Get Even More From Bustle — Sign Up For The Newsletter