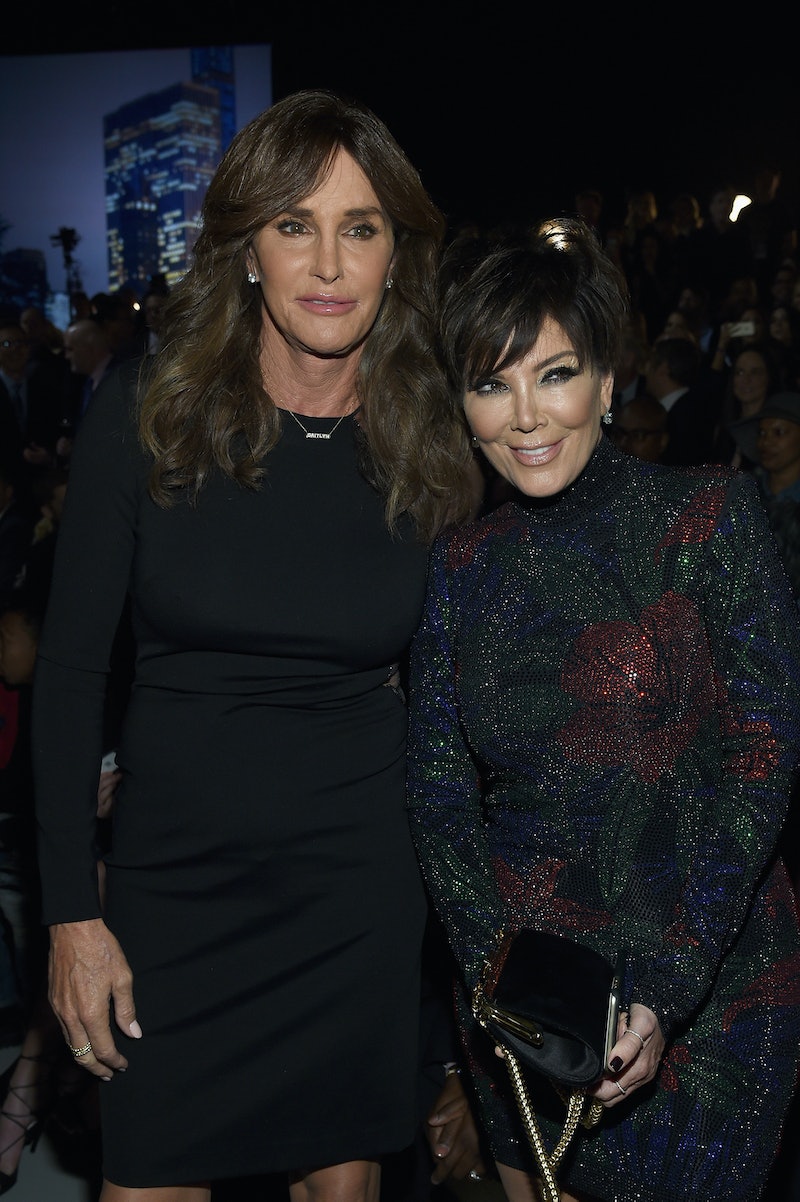 For a long time after Caitlyn Jenner made her transition public earlier this year, it seemed like things would never be the same between her and her ex-wife, Kris Jenner. Of course, the 66-year-old former Olympian was making such a big change that it's totally understandable her family would have an adjustment period as they got used to their new normal, but no one seemed to struggle with Caitlyn's transition more than Kris. And who could blame her? She was married to one person for more than 20 years, and suddenly, that person essentially disappears. But finally, there's good news. It seemed like their relationship would always be on the rocks, but now, Caitlyn and Kris are finally getting along — at least, according to Kim Kardashian, anyway.

During an interview with E! this week, Kim said that Kris and Caitlyn now have a strong relationship and that they're "in such a great place right now." If you've been watching Keeping Up With The Kardashians this season, you know this is a major change from the way things were the last time we caught up with my favorite reality family. Kris and Caitlyn were on the outs, since she was so heartbroken about losing the man known as Bruce Jenner, and her daughters were pretty miffed at the way Caitlyn talked about her marriage to Kris in her high profile Vanity Fair interview. Now, though, it sounds like there's finally peace in their family.

It's good to hear that they're able to be friends now, because there will never not be a time when their lives aren't intertwined. Aside from the fact that Caitlyn will always be a part of the Kardashian family, she also shares two daughters with Kris, so that's a connection that will never go away. I don't know if they'll ever be BFFs, but it does seem like they're in a place where they can support each other and their kids together, like they did when they attended the Victoria's Secret Fashion Show taping earlier this week to see Kendall walk. Things are getting better for them, and I'm relieved. Kris Jenner might be a bit abrasive sometimes, but it has been so heartbreaking watching her cry on KUWTK!

In fact, things are improving to the point that Kim even added that they will probably all spend the holidays together as a family, like they've always done. "We haven't really talked about it [but] I'm sure Thanksgiving we'll all have it at one of our houses and then the holidays, we have our Christmas Eve party like usual," Kim told E!. "We'll always be together."

Say what you want about the Kardashians, but don't act like it wouldn't be a blast to be part of such a huge, loving family. Can't wait for those Thanksgiving Instagram posts!