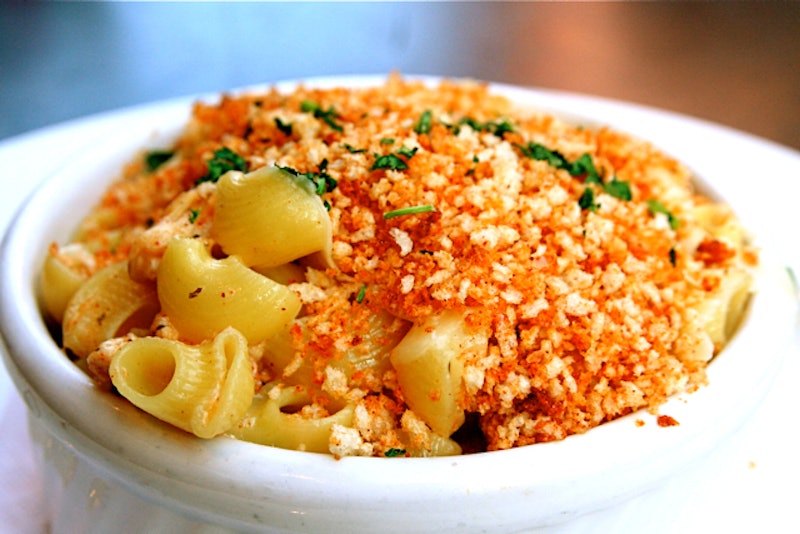 Macaroni and cheese is one of those things that's so perfect, it's difficult to imagine a world in which it doesn't exist. Because really, where would we be without the ethereal combination that is chewy pasta and ooey, gooey cheese? I imagine that's what food blog Epicurious had in mind when they created "The Secret History of Mac and Cheese in 109 Seconds," a short, animated video detailing just exactly how mac and cheese came to be. And you guys? It's far more fascinating than I think any of us probably guessed.

According to the video, recipes combining pasta and cheese date back over 500 years. Indeed, I did a little digging and found that a 14th century cookbook manuscript known as the Liber de Coquina features a casserole-like dish called lasanis that requires the use of pasta and cheese. If you remember your Latin conjugations from high school — which you'll need in order to actually read the recipe — I invite you to make it and tell me how it is.

Of course, recipes appearing in Medieval Italy and England differ greatly from the gooey concoction we know and love today. And interestingly, Epicurious credits none other than Thomas Jefferson with the popularization of the dish in the U.S. of A. So my question is, why isn't there an ode to macaroni and cheese in Hamilton ?

Anyway, after spending time in France (where he served as an ambassador during the Revolutionary War), Jefferson reportedly had both macaroni and a pasta-making machine shipped over to the United States, later using them to serve mac and cheese at presidential dinners. One guest in particular wrote in his journal that the dish was "not agreeable." One can only hope he wasn't invited one of Jefferson's dinners ever again, because that is clearly blasphemy.

So how did we end up with the recipe preserved for posterity? Epicurious credits Jefferson's distant cousin Mary Randolph, author of the cookbook The Virginia Housewife , with codifying it in its modern form. The ingredients are:

Along with a little milk and salt. The instructions read as follows:

Boil as much macaroni as will fill your dish, in milk and water, till quite tender; drain it on a sieve sprinkle a little salt over it, put a layer in your dish then cheese and butter as in the polenta, and bake it in the same manner

However, whether or not Randolph was the "inventor" of mac and cheese as we know it seems a bit unimportant to me. Such a glorious combination of dairy and carbohydrates is only natural; as such, it was merely a matter of time before someone shared this all-important knowledge with the world.

But that's not all there is to the history of mac and cheese. The recipe continued its popularity throughout the 18th and 19th centuries; indeed, many recipes and variations from the Civil War Era are still in circulation today. Most of them feature parmesan as the cheese of choice. Furthermore, since its modern inception, mac and cheese has become a staple of comfort food throughout the United States and beyond. Within the last ten years, macaroni and cheese has even "elevated" itself to the status of "sought after side dish" in the U.K. Around the world, it's served at fancy restaurants and KFC alike because, quite simply, it makes absolutely everyone happy.

Watch the full Epicurious video below for much, much more:

More like this
Lotus Biscoff Does A Biscuit-Chocolate Hybrid Now
By El Hunt
I Tried The $20 TikTok Viral Oishii Strawberries — Here's What I Thought
By Sophie Hanson
Dunkin’s Pumpkin Spice Latte Is Officially Back This Week
By Mia Mercado
Trust Me, Pickle Martinis Are The New It Drink Of The Season
By Emma Carey
Get Even More From Bustle — Sign Up For The Newsletter