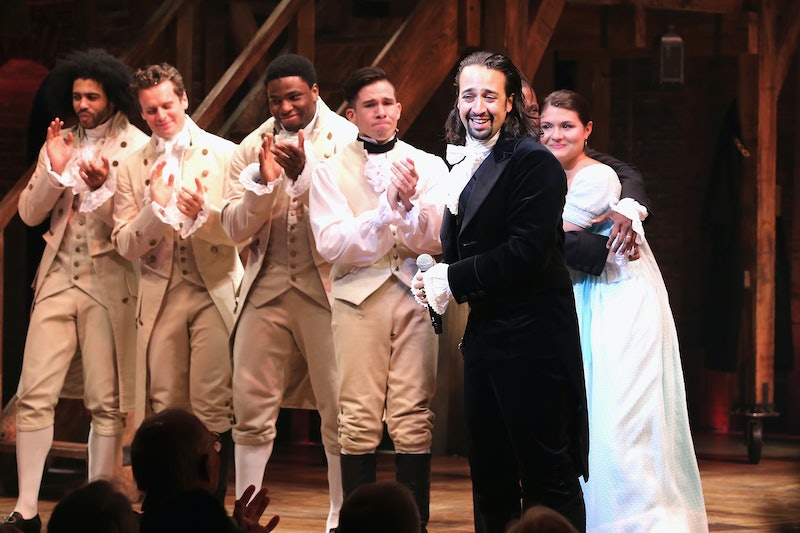 I would like to institute a moment of silence for my pre-Hamilton self, because I firmly believe I had at least a two percent chance of being a normal human in polite society before it came along. But alas, ever since the day that I first saw Hamilton on Broadway, I have forever assumed my true form: HAM TRASH. It is the only thing that matters to me — and before you say something logical like, "Wait, what about your family?!" PLOT TWIST: They are every bit as painfully obsessed as I am.

For me, though, Hamilton has bridged the gap of my two nerdy worlds: as both a musical theater kid and a former historical reenactor (#DolleyMadisonSwag, CHECK IT), this show basically blew my brain. I have been on Team Ham since the tender age of 15, when I purchased a Wiccan how-to guide, assembled my dorky crew of friends, and earnestly attempted to summon the ghost of Alexander Hamilton in my fireplace. We were not successful in this attempt, although I would go on to accidentally date a distant descendent of Aaron Burr my senior year (my bad?). What I mean to say with all of this is that I am and always have been weirdly invested in the history of America's favorite hothead, and although the musical was meant in some ways to salvage Hamilton's slandered reputation, he was always the tops in my books. (Especially my Wiccan ones, it would seem.)

(Me as a 17-year-old in 2009, doing normal things that 17-year-olds do ... i.e., chilling with two dudes pretending to be James Madison and Alexander Hamilton and traipsing around Mount Vernon.)

In any case, I'm wrecked, it's too late for me, everything in my life is either Hamilton or not-Hamilton, and I'm going to have to live with the knowledge that I have peaked and will never enjoy another show as much as I love this one. But at least the spiral down to Ham Land has been a fun one, starting with:

Complete And Utter Emotional Paralysis Upon Seeing The Show

It was like ... I blinked, and three hours of my life were gone. Nay, life as I knew it was gone. It would never be the same again.

I saw the show in August, and I can't really tell you what happened in that month or so I had to wait for the soundtrack to come out. It was like being left in purgatory. Living a half-life, waiting to live my Ham-life. I stared longingly at my program. I repeated the few lines of refrains I could remember from the show until I sounded like a broken music box with legs and an affinity for cheddar cheeses. (It was a Dark Time.)

A Bliss Unlike Any You Have Ever Known

NPR released the soundtrack on a work day, and I binge-listened to it and danced at my desk so shamelessly it is a miracle I wasn't smacked upside the head by closing time.

After the binge-listen, you come to your senses: You only get to learn this soundtrack once. You have to prolong that early magic for as long as possible, and you have to respect the sanctity of Lin-Manuel Miranda's insane beats and lyrics by only listening when it has your complete and undivided attention. For me, it means only listening to the soundtrack when I go on my eight-mile Saturday runs — and yes, the anticipation kills, but it also hurts so good. (Also, pro-tip, future marathon runners: this soundtrack is the answer.)

Researching The Eff Out Of Every Line In The Musical

I already did this in high school what with that whole historical reenactment thing, so in some ways delving back into the lives of the founding fathers was like visiting my old friends ... and in other ways, it was me bawling at my laptop at two in the morning over a screenshot of a note Hamilton wrote to his wife that ended with "Kiss my boy a thousand times." (PHILLLLLIPPPPPPP.)

Awkwardly Applying The Songs To All Your Life Situations, And Accidentally Singing Them To Yourself

Today is his kid's first birthday. You want to know how I know that? BECAUSE I AM HAM TRASH. And also because I love babies almost as much as I love Hamilton. Almost. (Sorry, future kids.) Oh, and just in case you didn't catch on that this is, in fact, Lin-Manuel Miranda and his wife, attorney Vanessa Nadal, in this Humans Of New York photo:

Sinking Into The Tumblr Abyss

WANNA KNOW WHAT HOGWARTS HOUSE EVERY SINGLE CHARACTER IS IN?! Good, because there are only 86,000 posts about it now. (Hamilton is such a second-gen Slytherin.)

Obsessively Popping Up At Every #Ham4Ham You Can

"YOU CAN'T STAND ON THE SIDEWALK." — Me, to every #Ham4Ham newb who tries to block my view after I stood in line for an hour to get prime standing spots.

I'm not even going to talk about the pain of repeatedly losing the lottery because the pain is too fresh, y'all. I wanna be in the room where it happens. Or at least crouching in the back of it with all the other standing room tickets.

I saw Christopher Jackson walk by at City Kitchen and it took every single ounce of restraint in all 5'4" of me not to yell, "Here comes the generAL ... the PRIDE of MOUNT VERNON!" at the top of my lungs.

If I weren't sure that shoving my headphones into stranger's ears and shouting "YOU DON'T EVEN KNOW!!!!" loud enough to make Billy Eichner cringe weren't grounds for getting arrested in New York, I'd be doing it 24/7.

I can smell another Hamilton fan from a block away. We are like beautifully nerdy magnets.

Captioning All Your Life Happenings With Exclusively Hamilton Lyrics

Props to my little sister, who captioned our reunion selfie with this when she visited me in NYC.

Carving A Precarious Hole Out Of Your Rent Budget

Buying a limited viewing single seat in the hella back of Hamilton like:

My budget cries, "Girl, no, you can't afford this,"

I shoot back, "WE HAVE RESORTED TO EATING OUR HORSES."

No feeling in the world will match the feeling you get when the music swells up under you and Hamilton starts. R.I.P., financial welfare and whatever semblance of normalcy I had left. I am 60 percent water, 40 percent Hamilton, and 0 percent sorry.

More like this
Austin Butler Confirms Vanessa Hudgens Pushed Him To Do 'Elvis'
By Alyssa Lapid
Andie From 'How To Lose A Guy In 10 Days' Is A Total Gemini
By Nina Kahn
James Cameron May Come To Regret His 'Titanic' Door Experiment
By Stephanie Topacio Long
Taylor Lautner Copped To Finding Jacob "A Little Annoying" In Twilight
By Stephanie Topacio Long
Get Even More From Bustle — Sign Up For The Newsletter
From hair trends to relationship advice, our daily newsletter has everything you need to sound like a person who’s on TikTok, even if you aren’t.