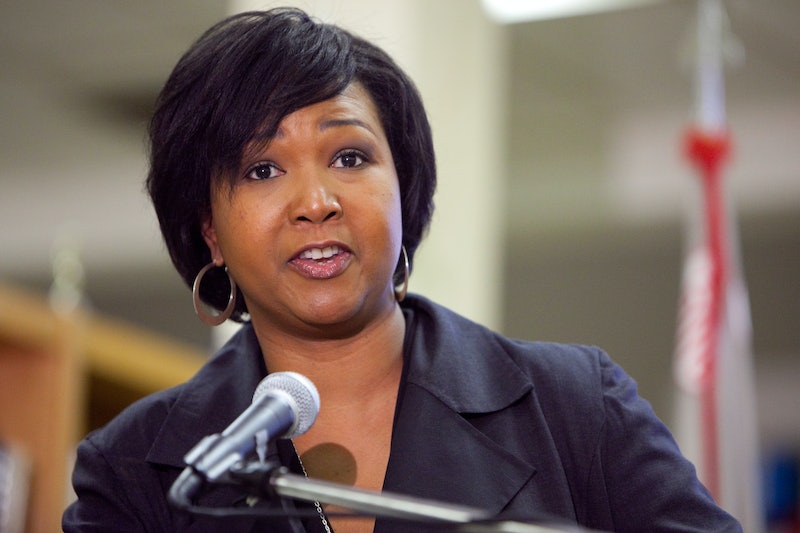 In the early decades of space travel, women of color had to fight tooth and nail to get even the most menial jobs, and becoming an astronaut was almost out of the question — that is, until Dr. Mae Jemison paved the way in 1992. After Sally Ride became the first American woman to travel to space in 1983, making it clear that opportunities were finally opening up for female astronauts, Jemison applied to NASA's astronaut program. After a year of training, the STS-47 mission of the space shuttle Endeavor took off with Jemison on board, and she made history as the first woman of color in space.

When it's put so plainly, Jemison's story appears uncomplicated: She decided she wanted to be an astronaut, so she made it happen. However, such simplification glosses over the obstacles facing women, and especially women of color, in science and technology fields — obstacles that women face even today. When Jemison was applying to be an astronaut in the late 1980s, gender diversity in STEM fields was even more dismal than it is today; in fact, NPR writes that the amount of women in computer science actually dropped in the 1980s. Additionally, Jemison was only the second person of color to become a NASA astronaut at all, preceded by just one man, Guion Bluford.

Diversity in STEM fields has improved in the years since Jemison's space flight, but not by much. Women are still painfully underrepresented in the sciences: We make up just 12 percent of the engineering workforce and 23 percent of computer science jobs, and the numbers are even worse for women of color. The lack of diversity in STEM fields has become so alarming that President Obama has even dedicated a branch of the White House to encouraging women in STEM.

That being said, we're still lightyears (har har) ahead of where we'd be without Jemison's inspiration. A recent Tech Insider interview with Jemison highlights just how awesome she is, so let's take a look at six ways she paved the way for women in STEM:

1. She Was A Pioneer

Instead of just daydreaming about becoming an astronaut, Jemison bided her time until the space program was ready for more diversity — although that was hardly the only dream she achieved. After receiving two degrees from Stanford University, she earned her doctorate in medicine from Cornell, and then she spent a few years in the Peace Corps. I'm exhausted just from typing all that activity, let alone living it.

2. She Has Varied Interests

There's no doubt that Jemison is interested in the sciences; her medical degree, chemical engineering degree, and the fact that she was a freakin' astronaut speak for themselves. However, Jemison has never sacrificed her love for art. Throughout high school and college, she studied theater, dance, and social science, and she remains a vocal advocate of teaching arts and sciences together even today. Her TED Talk on the subject will inspire even the least creative among us to pick up a paintbrush.

"I grew up during the Apollo [space shuttle] era, and... they didn't have any women astronauts. I thought that was the dumbest thing in the world," she told Tech Insider in a recent interview. (And she's absolutely right.)

She went on to explain that she didn't go into space for the fame, or even to provide an example for other women, although that certainly helped. "I would have gone into space if there had never been anybody of any kind going," she said.

4. She Credits Other Women

Jemison is a vocal supporter of other women, and she makes sure to point out their achievements. "There was a group called the Mercury 13 who were tested back in 1961... They did as well as men, and in many of the tests, they actually blew men out of the water," she explained to Tech Insider.

5. She Passes On Her Knowledge

After leaving the astronaut corps in 1993, Jemison accepted a teaching fellowship at Dartmouth, where she was a professor of Environmental Studies until 2003. In 1994, she founded an international science camp for students between the ages of 12 and 16, The Earth We Share, which "promotes science literacy for all students and even adults."

Jemison has multiple honorary doctorates from a variety of universities, a Detroit public school named after her, served on the board of directors for the World Sickle Cell Foundation, was awarded the 1988 Essence Science and Technology Award, and has received so many honors over the years that it's impossible to round them all up in one post. Plus, she was even featured on Star Trek: The Next Generation , aka every science nerd's wildest dream. If that's not inspirational, I don't know what is.

Be sure to check out Tech Insider's video interview with Jemison — it's a must-watch.

More like this
August 2022 New Moon Do’s & Don’ts
By Brittany Beringer
Your Daily Horoscope For August 17, 2022
By Alexandria Lettman
How To Turn WhatsApp Read Receipts Off
By Emma Carey
12 Cheeky Instagram Captions To Use When You Haven’t Posted In Weeks
By Emma Carey
Get Even More From Bustle — Sign Up For The Newsletter