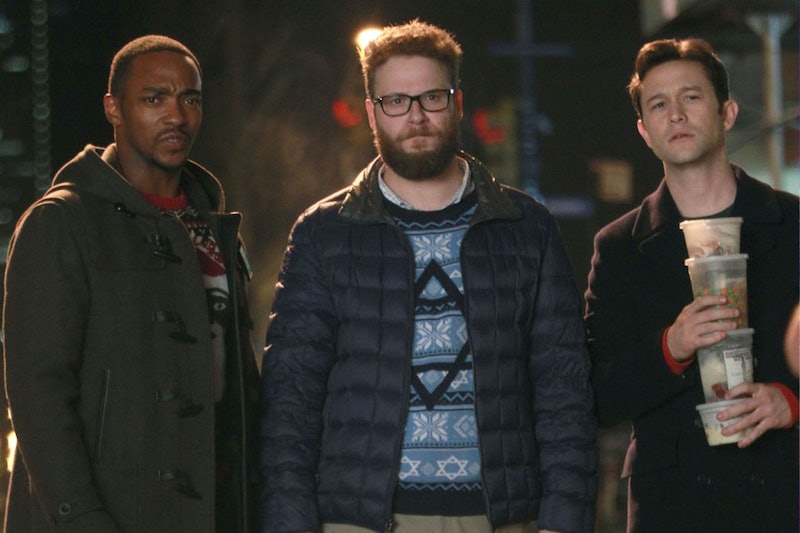 Christmas movies are an annual holiday tradition. They help spread the messages of the holiday season, like peace on Earth, goodwill toward men, and cocaine-induced vomiting in church. OK, so that last one only applies to The Night Before , the insane new Christmas movie starring Seth Rogen, Joseph Gordon-Levitt, and Anthony Mackie as three best friends who have a tradition of going out every Christmas Eve. But since this is the last year they'll be able to do it, they're pulling out all the stops and having the most epic night before Christmas ever (plenty of creatures will be stirring). The movie looks hilarious, and their partying looks fun, so how can you have your own Night Before ?

If you want to party like the guys in the movie, there's a couple things you need to keep in mind first. First of all, you're going to want to be safe. In the movie, Rogen's character combines psychedelic mushrooms and cocaine and has a serious freakout. I definitely don't condone taking any illegal drugs for your party and instead suggest that you stick to booze and, if it's legal in your state, weed. And still, know your limits. The second rule to keep in place is to be respectful. It would be pretty inappropriate to show up lit to a midnight mass or scream obscenities at a quiet family gathering full of strangers in real life, so just leave those parts to the movie. Now, with the boring regulations out of the way, here's how to party.

Get the Proper Attire

The guys rock some amazing ugly Christmas sweaters in the film, and you're going to need to outfit yourself similarly if you want to do your party justice. Tipsy Elves has every one you could ever want, including the exact ones from the movie.

Go Out For Chinese Food

With all the drinking you're going to be doing, you're definitely not going to be driving anywhere. But do you really want to mess around waiting for Ubers and their surge pricing on Christmas Eve? Didn't think so. That's why you need to rent a party limo for the night. Bonus points if you can find a monster Red Bull one like in The Night Before.

Before the night gets too crazy, you'll need to warm up with some Kanye West jams performed on a huge toy piano. You can buy your own, but if you want to save 50 bucks and you're in New York you can always visit FAO Schwartz.

Once the night gets rolling, you're going to want to join your BFFs for a screaming rendition of "Wrecking Ball". Who knows, maybe Miley Cyrus will even join in!

You'll need champagne, beer, malt liquor, and whatever other hooch you can get your hands on. If you can drink it, pour it out for lost homies (or parents), or spill it, you'll want to have it around.

Go For An Actual Sleigh Ride

Hopefully yours turns out to be less dangerous than Rogen's, but nothing says the holiday season like a quaint sleigh ride... on your way to getting smashed.

Find The Biggest Party In Town

You can't do this celebration by yourself, so you're going to have to score tickets to the biggest party around. And if there is no party? Then make your own and invite as many people as possible.

Blow Up A Snowman

Building a snowman is fun, blowing one up is potentially a lot more fun. Again, safety first, but you know you've always wanted to see an exploding snowman.

By following this checklist, you should be able to have an epic night before Christmas just like the guys in The Night Before. Well, minus the vomiting and near-death experiences anyway.

More like this
22 Movies On Netflix That Are Perfect For The Whole Family
By Bustle Editors
Selena + Chef Season 4 Was Filmed At Hannah Montana's Old Malibu House
By Jake Viswanath
Kanye West Has The Most Kanye Reaction To Kim Kardashian & Pete Davidson's Split
By Jake Viswanath
Are John Legend & Kanye West Still Friends? The Singer’s Latest Update Is Candid
By Brad Witter
Get Even More From Bustle — Sign Up For The Newsletter