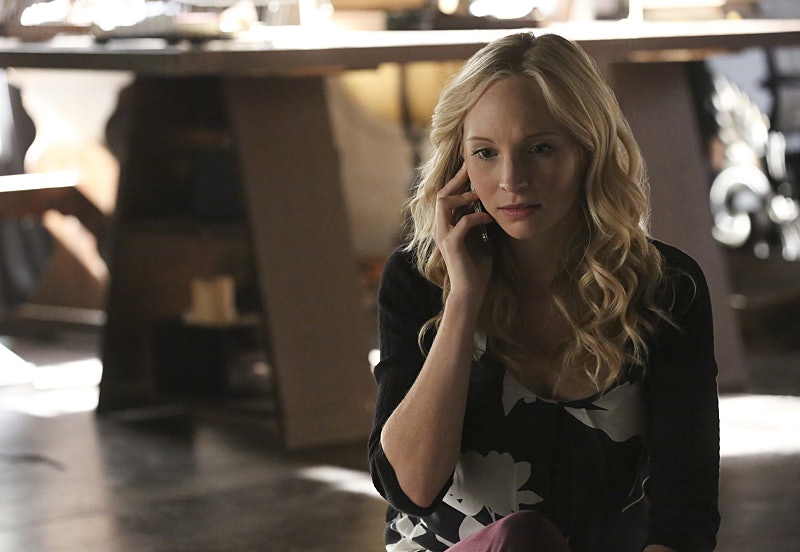 Someone pinch me because there is absolutely no way this can be real, right? In what has to be the biggest Vampire Diaries flash forward reveal yet, we learned during Thursday night's episode "Best Served Cold" that Caroline and Alaric are engaged on TVD three years from now — a sentence that I truly never thought I'd ever be uttering. Like ever. Seriously, how is this even possible? And let me remind everyone that he was her high school teacher not too long ago. Basically, this was the least likely match up I could've ever imagined happening and yet here we are in a future where they're about to become husband and wife. Truly trippy stuff, my friends.

However, that wasn't the only piece of insight this flash forward delivered. Last we saw of Alaric's house, Damon was standing right outside of the doorway, requesting to be let inside. And evidently, he finally did. While standing in the kitchen (and picking glitter off his BFF's face), Damon informs Alaric that it's imperative that they track down his Broadcaster fiancée (aka Caroline Forbes) because she's in serious danger. Just then, we see our favorite Mystic Falls blonde performing a news broadcast (with a little blood running down her face) and announcing that she has an "urgent message for Stefan Salvatore." So, to quote Damon: looks like this ball and chain won't be home for dinner.

If you recall, during Caroline's big flash back reveal, we learned that not only is she engaged (to Alaric apparently), but she also gets attacked right in the studio by the ever-mysterious vampire assassin. And considering her injured state on the television, it's safe to assume that this arrow-weilding character is the one pulling her strings. Let's just hope that whatever this killer wants with Caroline, it won't end up leading to her death. Though, given Alaric's terrible history with love, I'm starting to fear the worst.