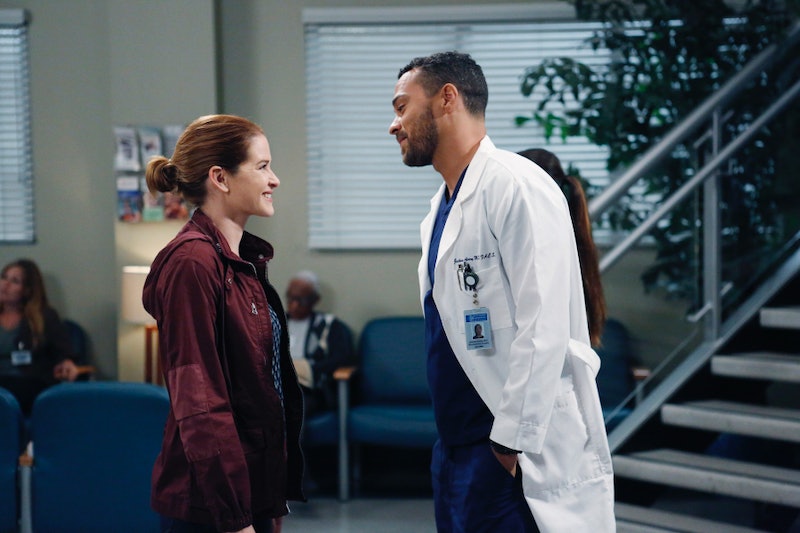 Guys, it actually happened: After several episodes of feeling like the April and Jackson relationship was absolutely hopeless on Grey's Anatomy, finally, a glimmer of hope. Looks like the events of last Thursday's episode did the trick as far as reminding Jackson of the things he loves about April instead of why he's so angry at her, and he ended up asking her on a date. Of course, this wasn't going to be a 100 percent fun date — they obviously have some seriously big things to discuss about the future of their relationship. But when April and Jackson finally talked, they didn't even end up tackling the issues in their marriage.

Like Jackson says, it was fun — strong words coming from a dude who wasn't convinced this marriage was ever going to work again. This is positive stuff! But then, he revealed that they didn't end up talking about where to go from here in their relationship because April got paged. Oh, the hazards of being and being married to a doctor. The good news: It sounds like a night out together was exactly what they needed. The bad news: It wasn't productive at all.

However, something had to have clicked, because it took no time at all for these two to end up in bed together again, just like old times. Maybe it's because of their dinner, or maybe it's because Bailey has made it more than clear that she is done hosting Jackson on her couch and cooking him breakfast every morning,

But don't get too excited. The looks on their faces after they'd done the deed weren't exactly the looks of satisfaction... and it happened to the soundtrack of a Meredith monologue about doing things you regret. Oh, boy.

I've been pretty sure April and Jackson aren't going to get the happy ending I wish they would, but this turn of events has me hoping that I'm wrong. After all, at least one couple has to last on this stupid show. And by stupid, I mean amazing.