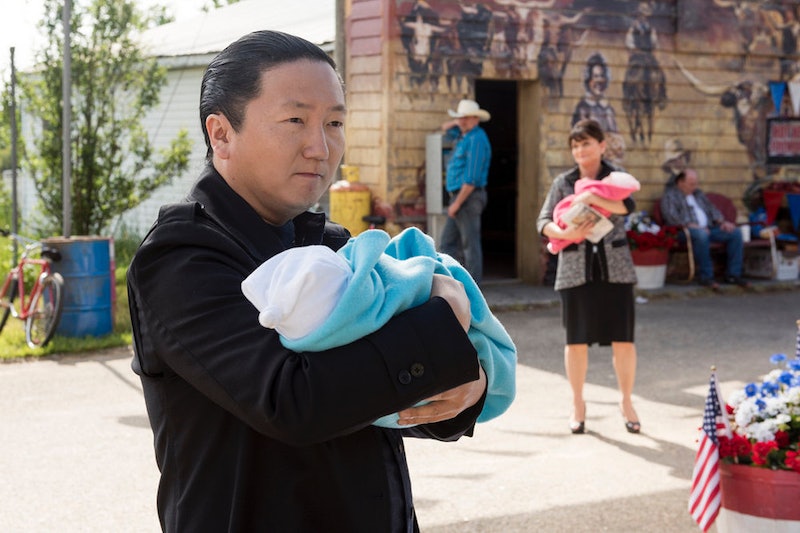 Well, that was one heck of a flash forward. While time jumps are all the rage these days on television shows, Heroes Reborn just took it to the next level. At the very end of the episode the show moved not just a few years, or even decades ahead as Heroes Reborn flashed forward 7957 years into the future. Yeah, how's that for mixing things up? We follow a butterfly (I see what you did there) as it flutters through a desert until it lands gracefully on the hand of someone who seems to be meditating. We pan up only to see that Katana Girl is alive on Heroes Reborn and somehow existing as a part of this future world. She basically looks the same as when we saw her last, and while I know that Miko is really the creation of Hachiro Otomo (made in his dead daughters image) she still looks very human, and very confused about her surroundings.

The world now looks straight out of Mad Max with its dry, barren landscape. The earth is hard and cracked with no water or trees to speak of. She follows the butterfly through the desert and when she winds around a corner she sees some sort of tent-like building in the distance. It's hard to tell exactly what it is, but it's clear that there is some sort of development in this no mans land. Is this the result of the apocalyptic event? Did Erica and Renautas really bring about the end of the world? It sure looks like it. On this bright side, we now have two characters (Hiro and Tommy) fully capable of time travel, so this wasteland is not necessarily the future everyone will end up in. After freeing Hiro Miko clearly has a larger destiny, and hopefully she will be able to join forces Tommy and Malina to keep this sad, desolate future from occurring.