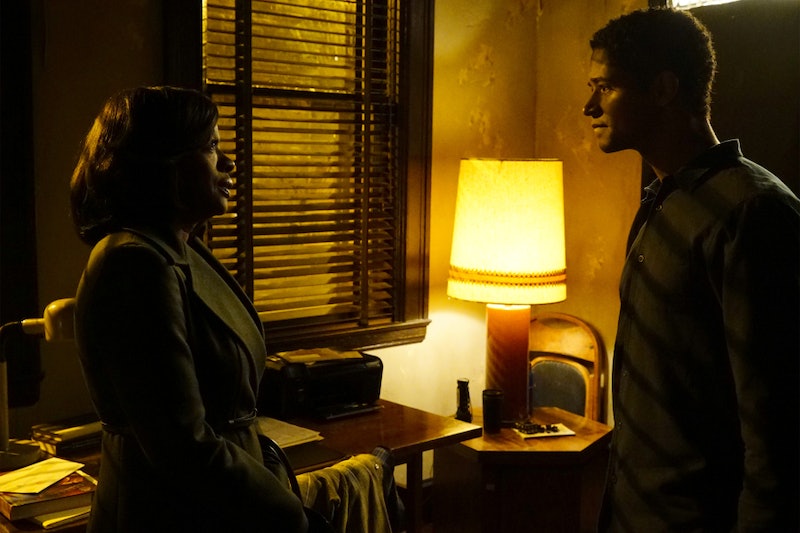 It is arguably a bigger mystery than who shot Annalise on Season 2 of How to Get Away with Murder. After wondering if they are or aren't related, the question of if Wes is Annalise's son on HTGAWM is still left unanswered. In some episodes, the two seem to have a relationship with an underlying sexual tension, and in others, it seems like Annalise is protecting Wes like a mother would protect her son. But, after "Hi, I'm Phillip," there were no clues as to Wes being related to Annalise, which is frustrating and mind-boggling after the tease viewers received last week about Wes being "him."

In the most recent episode, Annalise and Wes interacted very little, which makes it impossible for me to solve my own little side mystery of the two being related. I'm not sure if Shonda Rhimes is saving the big reveal for the finale, but the fact that Annalise told Eve in the week prior to "Hi, I'm Phillip," that Wes was was "him" is just really unfair. Just another week of theories and scandals clouding my mind — as a devoted Shondaland mind should be.

The fact that Annalise didn't mention her connection to Wes in this episode makes me think that their relationship errs on the side of not related. If she had that moment of clarity with Eve and then went back to treating Wes like any other student, then that seems to suggest that there's a connection, but nothing too familial.

Perhaps Wes' childhood was a case that Annalise worked on, and she vowed to protect him as he grew up? That would make sense why Annalise said "it's him," but didn't give any follow through in the most recent episode.

If we're lucky, How to Get Away with Murder writers will give us some clarity to what "it's him" means soon. With the winter finale just a week away — and a hell of a lot of big mysteries to solve — I worry that the Annalise/Wes thing is going to fall to the wayside and get picked up in the second half of the season. If that's the case, I'll just have to get crazy intense on fanfic about Annalise knowing Wes as a child and wanting to make sure he gets through life OK.

Or, the writers can just tell us. Please tell us. I'm not begging, yet, but I totally will if that's what it takes.