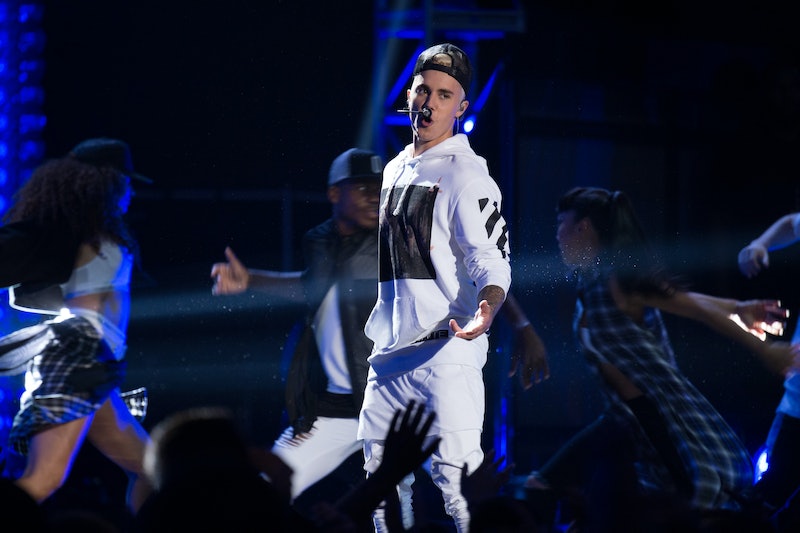 We've had our ups and downs with the Biebs over these last few years: he's ignored speed limits, failed at getting a monkey through airport security, looked like a real smartass during a deposition, and walked offstage during a performance. But he was also willing to put himself in the hot seat with a Comedy Central roast, and he's since consistently put out solid music that both Beliebers and non-Beliebers have enjoyed. Now, after two years, Bieber is back (not that he ever really left), and it seems for the better. So here they are: every song on Justin Bieber's Purpose ranked from best to worst.

You've likely heard three of the album's tracks already. "Sorry" and "What Do You Mean?" were released as singles before the album drop, and "Where Are Ü Now," the Skrillex/Diplo collaboration, has been available on iTunes for a while. But with a ridiculous 19 tracks to choose from on the album, there are brand news songs aplenty. You'll find a little bit of everything on Purpose : house music, acoustic guitar, piano ballads, slow jams, and standard pop. Don't forget an appearance by Nas! No really, this album has everything and the kitchen sink.

I must admit that I'm 100 percent biased toward this track, ever since hearing it play over the speakers at the gym while getting my treadmill on. Super subjectively the best track on the album, by far.

Yes, Justin. Your life is pretty much a movie, and everyone is indeed watching. Spot on with those lyrics, and the slow jam that eases us into the rest of the album.

It's no surprise "Sorry" was one of the tracks released before the entire album drop: it's good. A bit reminiscent of the beat that shows up after the drop in "Where Are Ü Now," without all the speed. (Are those Afro-Caribbean tones I hear?)

I was a fan of Bieber's acoustic version of "Boyfriend," so a guitar rendition of "What Do You Mean?" would obviously work really well.

The album intro, at just over two minutes long, is a perfect way to bring us into the Bieber mindset. It's raw and feels almost like an apology for all those ridiculous stunts Biebs pulled in the past. Which, in fact, it actually is to ex-flame Selena Gomez.

Could this song be any more fun? It's smooth, it's crisp, and it's a toe tapper for sure. We've all already heard it 80 times and we'll hear it 800 more, but that's OK.

If "Mark My Words" was an apology, "Purpose" is a search for redemption. And with the requisite soundbite of a Justin monologue: pull at my heartstrings, why don't you?

I'm positive Bieber got the inspiration for this track from Kanye's VMA speech, and that automatically bumps it up at least three spots. You be that visionary for the children, Justin, but be warned you've got some competition.

A really nice, simple tune. It's also pretty hilarious. Translation of the song? You should basically marry yourself because nobody else likes you and your behavior.

Another ode to giving it all you got, from Mr. Justin Bieber. A solid tune.

Did Justin Bieber just turn into Elton John with this piano? While the lyrics are no The Great Gatsby, "Life Is Worth Living" is a nice attempt at a sentimental song.

A standard Biebs song, but he won't be snagging any Grammys for this. Did I hear a woman speaking French at the end there? Was that somehow related? Was she the one that could have been?

I'm not sure what Bieber and Halsey created with "The Feeling," but that's not necessarily a bad thing. Is it strange I feel like this should be background music to the next Cirque du Soleil show?

Nothing wrong with "Company," but nothing special about it either. On a 19-track album, though, there's bound to be a few fillers. You'll hit skip on your iPod this month to get to the better songs, but in a year it might pop up on Shuffle and be a pleasant surprise.

I'm sure Bieber wasn't directly attempting to sound like an overly aggressive boyfriend, but I'm not a fan of any man telling me to "get used to" him doing pretty much whatever he wants. Automatic point deduction.

I think Bieber is slowly morphing into his mentor, Usher, with all these sexy slow jams. Not as graphic as Usher's "That's What It's Made For," but pretty much nothing could be.

Artist Travi$ Scott makes an appearance on this slow-jam track and I think he must have told Biebs to imitate Beyonce's voice in "7/11." It didn't work. #CantBeatQueenBey

The first track on the album to feature another artist, Bieber pairs up with Big Sean on this one. And sadly, it's not a winner.

Most of Bieber's collabs on Purpose don't work, and this is the worst of them. But nice to hear you again, Nas.