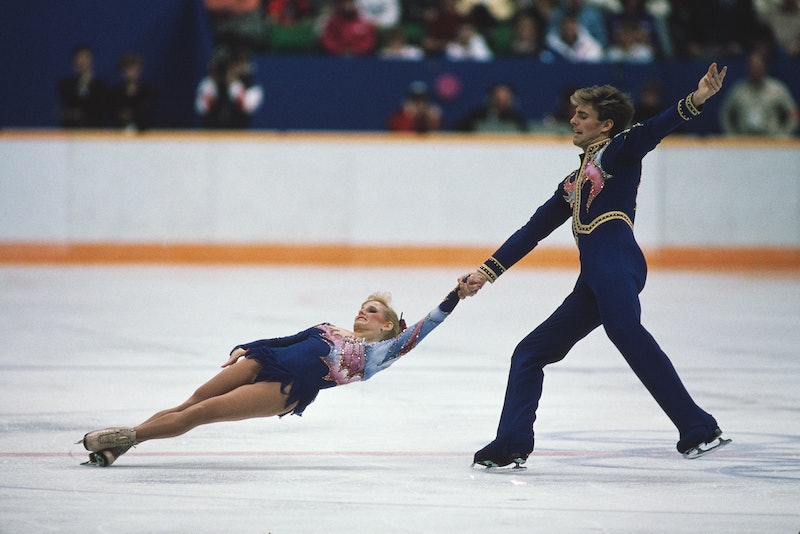 If you're looking for high drama, politically-motivated favoritism, and the most elegant kind of foul play, figure skating is the Olympic sport for you. And it's not just a overabundance of flesh-panelling and egos that make for trouble — the sport seems to attract some of the most Machiavellian behind-the-scenes "fixers," too.

Here's your guide to the five greatest figure-skating scandals to ever grace the ice...

Despite the Cold War finishing up on the political stage in 1991, it extended its icy grip to the skating ring well into the 21st century.

The 2002 Winter Olympics in Salt Lake City was marred by yet another Soviet vs. the Rest skirmish: it turned out that Russia had manipulated the votes for its figure-skating couple, Elena Berezhnaya and Anton Sikharulidze, over the better-performing Canadian duo Jamie Sale and David Pelletier.

The truth emerged when French judge Marie-Reine La Gougne broke down and admitted that she'd been forced by the head of the French Skating Organization to vote for the Russian couple, irrespective of their performance. An inquiry was ordered, and the International Skating Union upgraded the Canadian couple's medal to gold, while La Gougne was suspended for misconduct.

The Russians, however, remained untouchable.

Want to play judge yourself? Why not compare Jamie Sale and David Pelletier here...

Quadruple Jump For... What, exactly?

The conventional wisdom in figure-skating goes like this: If you want to win the men’s competition, you need to include a quadruple jump in your performance. Only two medallists managed to make gold without it — at least, before 2010, that is.

At the Vancouver Games, when American skater Evan Lysachek took the gold without making the quadruple jump — Russian skater Evgeni Plushenko who had included the jump — was incensed.

Ironically, just days before the Games, Plushenko had made curt comments at a news conference about what he thought were arbitrary decisions about what constituted better technical performance: “If the judges want someone to place high, they can arrange it."

His remarks were seized upon by U.S. judge Joe Inman, who sent an email to more than 60 other judges and officials suggesting that Plushenko was deluded about the quality of the rest of his skating, and that the other judges would do well to consider that.

This was taken as evidence that Plushenko was onto something more than a conspiracy theory — and when he lost to Lysachek, the proof seemed to be, yet again, in the Cold War pudding.

You Gotta Break it to Make It to, er, Break It

In 1994, American figure-skating darling Nancy Kerrigan was famously clubbed in the right knee, in an attack planned by skating rival Tonya Harding's ex-husband and his co-conspirator. Gasp!

Despite the attack causing her to miss the US championships, she got her game back in a record seven weeks to appear in the Lillehammer Winter Olympics. There, she took a silver medal for her performance, finishing just behind Ukranian skater Oksana Baiul. who took gold. Rumours flew that Baiul had won because of Russian favoritism, rather than skill, and Kerrigan was not happy.

The medal presentation was delayed when Olympic officials were, um, tracking down the Ukranian national anthem. Kerrigan, meanwhile, was mistakenly told this was due to an over-emotional Baiul having her tear-smudged make-up retouched.

Then, CBS News broadcast footage of an irritated Kerrigan complaining about it —"What's the difference? She's only going to get up there and cry again" — and the press seized upon her for being ungracious. Kerrigan even lost sponsor endorsements and TV deals following the debacle.

Moral of the story? Play the martyr, even if you're the victim of a physically violent conspiracy, and never bitch about another competitor's make-up choices. At least, not until you're back in your own dressing room.

From The Top Of The Podium To Behind Bars

Ever wonder what Olympic gold medallists go on to do with their lives? Well, in this case, kidnapping and sex trafficking.

Nearly 30 years after he took gold at the 1968 Olympics, figure skater Wolfgang Schwarz was sentenced to eight years in prison in 2006 after he was found guilty of plotting to kidnap the daughter of a Romanian businessman, and ransom her for $4 billion.

And this was after being convicted in 2002 on trafficking charges for ferrying five women from Russia to Lithuania. Schwarz was sentenced to a year and a half in jail for that one, but it was postponed because he was suffering from side effects of skin cancer treatment.

And Schwarz's reasoning for swapping the podium for the prison cell?

"I admit it was my idea to kidnap the woman. I cannot explain it."

It's not just point-scoring that stirs controversy — it's the clothing requirements, too. Men are only banned from wearing just tights, but it's a different story for women.

Until the 1988 Calgary Games, women could pretty much wear whatever they liked. But that year, the International Skating Union implemented a competition dress code — and why? Well, skater Katerina Witt supposedly wore such a high-cut unitard, it prompted the "Katerina Rule:" completely covered hips and buttocks, and no exposed midriffs from that point onwards.

I don't know, maybe I've been exposed to too much celebrity side-boob, but it looks a-OK to me. Still, don't just take my word for it — check it for yourself.

FYI: keep an ear out for the commentator's "insight" on Witt's routine: "I think the Carmen we're going to see is a flirtatious one".