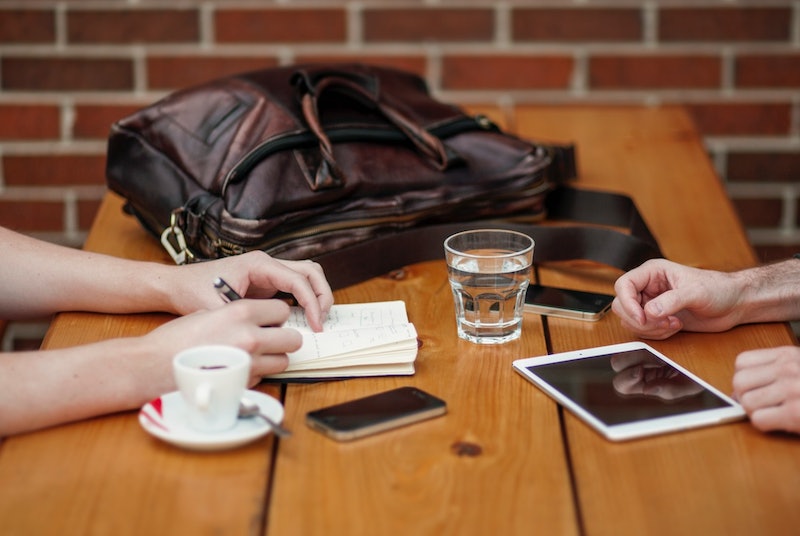 I've held a lot of jobs in my life — from summarizing old Doctor Who episodes in my teens to a five-year stint as a sex columnist — and everyone one of them has been done via telecommuting, a situation that has always suited my introvert personality. I've never met most of my bosses in person, and when it comes time to do on-the-ground hand-shaking to further a project, I always fear that I'll panic, accidentally say something offensive or strange, and then have to flee like I'm escaping a house fire. Networking is not, shall we say, my forte — but despite all that, I know how to get important networking done without causing a diplomatic incident or requiring my own disappearance from the country.

And it's important that you learn how, too. From college onwards — indeed, in some cases earlier — you've probably heard messages about the importance of building a professional network. You may imagine that this leads to piranha-ish cocktail parties where everybody circles each other, trying to figure out how they can feed off everybody else. Those kinds of parties do exist — but they are the exception, not the rule, and you shouldn't avoid networking just because you fear it will always be like that. Especially because, later in life, networking becomes an asset, no matter what career path you choose: your next cool job, opportunity to contribute to an amazing project or invitation to do something insanely awesome could come from it. So yes, even introverts need to do it, but no, it isn't going to kill or exhaust you — as long as you strategize properly.

Here are nine ways to network when you're also an introvert, taken from both research and my own life. And no, just going home and sleeping isn't actually one of them (much as I wish it were).

1. Try To Go One-On-One As Soon As Possible

Chances are good that you're much better at (and less easily exhausted by) interacting with someone one-on-one than you are at trying to draw someone's attention in a huge crowd. So avoid those huge "networking" events where everybody wears name tags and looks faintly upset. If you're in an industry where those gatherings are the norm, though, use them as an opportunity to collect numbers, emails and whatever — and then use them to arrange one-on-one meetings or phone conversations at a later point. Don't be rude about it, but don't worry; many people will be trying to talk to as many people as possible at the event, and they'll be happy to keep your initial interaction brief.

If even one-on-one meetings are kind of stressful to you, you can try to take person-to-person interaction out of the equation altogether. Using social media will likely do less to drain your energy, so focus on having professional interactions on places like LinkedIn, GooglePlus, Twitter and anywhere else you can keep things short and snappy. The downside is that you'll likely competing with a lot of other stuff for your future connection's attention, so if you're cold-connecting with them, make sure to reach out to them in a way that is memorable and smart.

If there's absolutely no way you can get out of attending a professional event, bring along a friend for support. I do attend regular writer events where it's possible to meet publishers or other awesome potential connections, and I hate the whole thing — unless I have a garrulous, charming extrovert friend on my arm, doing some of the work for me. Let an extroverted friend take on the social energy and act as your PR person: it makes you seem important, and it also gives you a little breathing space for when it's time to make a connection yourself.

This helps. Even if you're in a no-business-cards profession, I swear that it helps. Business cards mean you don't have to go over your contact information and other professional details yourself; the basics about where you work and what you do will be much more easily communicated this way, particularly if you're exhausted and want to connect with somebody but can't summon the social strength. It's actually a bonus if you're in a creative industry, because so many people who work in these fields don't have business cards or anything similar; it makes you memorable.

5. Know How To Sum Yourself Up In Twenty Seconds

Keep your pitch about yourself short. It'll reduce your own energy expenditure and any anxiety about not knowing how to communicate yourself. And yes, you are perfectly allowed to prepare in advance and practice talking about yourself: in fact, utilizing your short-term memory instead of thinking on the fly every time you have to describe yourself and your work is going to save you precious strength. Try not to sound like a robot, but I guarantee a little prep will help you out.

If you're flailing and desperate to go home and escape all these people Wanting Things From One Another, but know you haven't yet connected with the person you really wanted to network with, ask them about what they're doing. Questions are often a lifesaver for introverts in professional situations; they allow us to sit quietly and listen, rather than actively participate in a more engaged way. You'll still have to expend your energy interacting, but at least they'll be flattered at the same time.

Make a game plan. Sometimes the best connections are the ones you can't plan for; but if you're an introvert, a little knowledge about what you're looking for can go a long way, and let you focus your interactions on the kinds of people you need to know right now. Sounds calculating, but think of it as a kind of shortcut on the highway; you're just trying to preserve fuel.

8. Don't Only Focus On Professional Goals

Work events, even if they're small and pretty relaxed, can still feel pretty rough for introverts. Just relax; sometimes being Master Networking Machine isn't the only point of attending these things. Give yourself other things to think about. OK, sure, you want to connect with other gaming developers who might have ideas about how to implement the great idea you have — but you also want to meet people who might want to join your volleyball team, or hang out with your workmates, or whatever. Even if you only achieve one of those things, it's still a social win. So don't be too hard on yourself.

9. Find Others Who Hate Networking And Connect

This is actually the best networking tip I know: very few people actually like doing it formally. The best networking happens naturally, when so-and-so introduces you to XYZ, who knows a person who'd be into ABC. When you're forced into a more rigid networking situation, though, find the people who look like they hate it as much as you do. It's high school dances all over again, and chances are that you'll find your fellow introverts — and that some of them might prove to be pretty fantastic contacts.