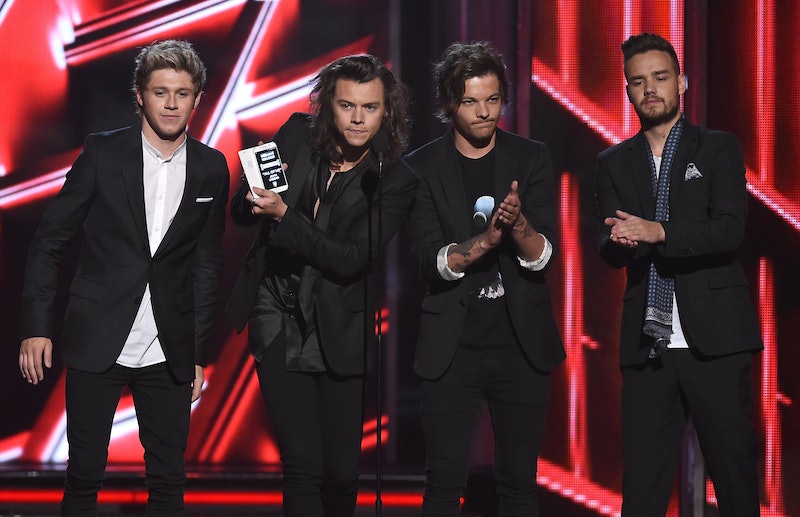 Depending on how bold an artist wants to be when writing a song about a real live person, they may either use the subject's actual moniker or take the safer, less controversial route and give them an alias. That said, if you're a fan of One Direction, you may be wondering who the "Olivia" is in One Direction's new song of the same name. Is there a real Olivia? If there is, is that truly her name? Listen, not everyone is as brave, open, and honest as Taylor Swift is in her songs, so the possibilities are pretty open.

To get to the bottom of this "Olivia" mystery, perhaps we should gather up some of the breadcrumbs that have been left for us, so to speak. First things first, there are the lyrics. And I'd hate to be the one to revolve everything around my girl Swift and her long-dead relationship with Harry Styles, but there most certainly are some lyrics woven throughout the thread of the song that seem a little too obvious to ignore. I mean, maybe I'm reading too much into it, but, "This isn't the stain of a red wine, I'm bleeding love," sounds an awful lot like a response to this: "You're still all over me like a wine-stained dress I can't wear anymore," Swift's iconic line in "Clean."

If you're skeptical about this theory, though, perhaps this will sway you. Julian Bunetta, co-writer of "Olivia," said this to Rolling Stone about the creation of the song,

This one is very near and dear to my heart. Harry, John [Ryan, co-writer], and I were in Westlake and trying to write one thing and came out with this. I don't know how it came out. We couldn't write anything for a couple days, and we couldn't focus. We were trying to write things, and they were bad. Then we would just laugh and order food and hang out. Then all of a sudden, at the very end of the day when Harry was going to leave, he was sort of saying the chorus phrase, so we just sat there and wrote it really quick. It came out really, really quick... That was an incredibly adult, musically indulgent song that we all had a lot of fun making. It makes me so happy. But "Olivia" was Harry's genius.

You heard it straight from the source here, folks. Olivia was Styles' doing.

If that's still not enough, I bring you this food for thought: Obviously, Olivia is not Swift's name, but it is her beloved cat's name. Somehow, I doubt Styles penned an ode to a fluffy fur ball with attitude, and I think it is much more likely that he slyly used a name associated with Swift, a name familiar enough to draw somewhat of a connection to her and the tune. Seeming more plausible now? Yeah, I thought so.

That said, it was Liam Payne who sort of leaked the song originally. So I suppose it could have been inspired by him, though I think it's unlikely. Case in point, Sugarscape interviewed Payne and asked him which One Direction song girl (Georgia Rose, Diana, or Olivia) he'd pick above all others. He responded,

Ooh, I mean me and Diana kind of had a thing but I can't go there again and Georgia Rose, well I met her once but we didn't get that far, don't think she liked me very much and I think she likes Louis more, so it's going to have to be Olivia. Actually that's my manager's wife's name! [Laughs] Please print that, he'll love that.

Manager's wife's name or not, it appears as though Olivia is someone he is not directly associated with. Obviously, he's playing coy, but I think his diversion tactic only solidified my previous Swift-inspired assumptions. Payne seems removed from the song enough to kid about it.

Which brings us back to the ever-slick Styles. I'll leave you with this line from the tune: "Remember the day we were giving up, when you told me I didn't give you enough." Sounds awfully similar to: "Remember when we couldn't take the heat, I walked out, I said, I'm setting you free" from Swift's, "Out of the Woods," doesn't it?