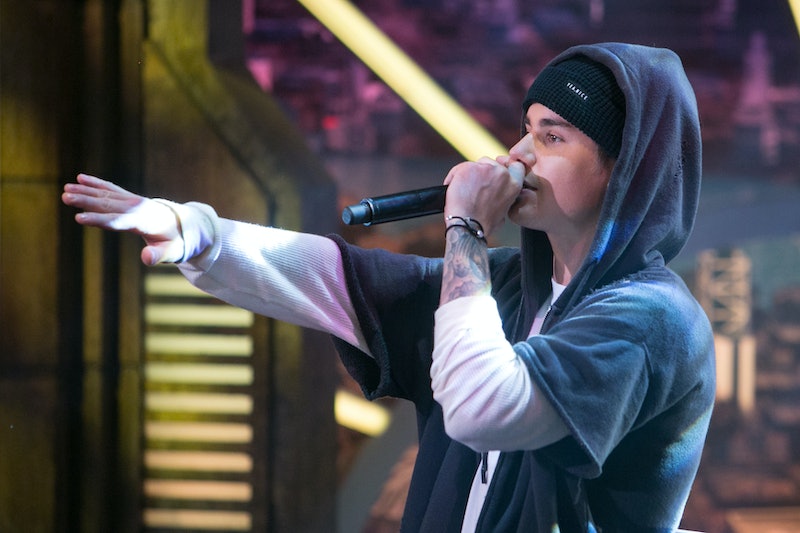 It's a glorious day for pop music! Yes, the Internet is set ablaze right now because, right after midnight on Friday, Justin Bieber dropped his brand new album Purpose. See, according to the kids today, it is a totally fire record (did I say that right?) and Beliebers have been freaking out all over Twitter (as they do). But, as a journalist, I knew better than to trust anyone else's opinion on all of this. I had to scope out the album myself to dig out its deeper meaning. That's right. I had to find out what exactly is Bieber's purpose based on this album. I'm sure I'm not the only one watching.

So I prodded my way into Spotify and began with the opening track, "Mark My Words." The title itself acts as a solemn promise, and the lyrics, though scant, urge us to trust the new and improved Bieber. "Mark my words, that's all that I have / mark my words, give you all I got" he says, as though to reinforce, "No really, this is all I can give you, this is the best and purest version of myself." Intriguing.

Now, let's look at "I'll Show You" and "Sorry," both teased with videos in the weeks leading to Purpose's release. "I'll Show You" is a classic story of Bieber feeling judged by the public eye, all the while feeling broken:

The subtext is "you don't know my life," basically. This message framed next to the constant line of "I'll Show You" insinuates that Bieber has something to show, something to prove. Maybe he yearns to validate himself as an authentic artist, or maybe he's just being straight-up vindictive. It's something I have a hard time deciding throughout the entire album.

"Sorry" is much more straightforward, comparatively. Every ounce of that song is a heartfelt apology to someone he hurt in the past (not to name names, but I would guess that it starts with S and ends with Elena Gomez). No subtext, no confusing, he is straight up asking for redemption, which made me think that Purpose would be a redemption album. Then, somewhere along the line, we get to "Love Yourself," and that's where he loses even this connecting thread.

"Love Yourself" is strange, because it puts Bieber in the place of being wounded — which is fine, he's allowed to have his heart broken — but he reacts kind of strangely. He talks smack about his ex (who, to be fair, sounds horrible) and then says things like, "and I didn't wanna write a song cause I didn't want anyone thinking I still care" he says. Except you did. You did a whole song about it. You got Ed Sheeran co-wrote it. You told her that your mom doesn't like her, and your mom likes everyone else. That's the most upbeat burn I've ever heard, and strays away from the overall message of contrite apology the other songs seem to be going for.

By the time we get to "Purpose," the actual purpose of this album (and of Bieber, and of the song itself) is muddled. Some lines like, "Ask you to forgive me for my sins, oh would you please?" harken back to the redemption theory, whereas the song as a whole is about how someone's love gives Bieber purpose. And that spoken word outro? It'll be interpreted in a melange of ways, but the crux of it is a sort of acceptance of the way things are. "It's like God, I'm giving it all I got, sometimes I'm weak and I'm gonna do it, and it's like I'm not giving myself grace, I'm just like understanding, that's just how it is," Bieber says. You do you, Biebs. You do you.

Ultimately, I can feel that that the majority of Bieber's "purpose" based on this album is to redeem himself, creatively, in the eyes of the public, and, yeah, with Selena Gomez, who he admits in several songs that he's done wrong by. However, there's also a vibe that also has a keen eye for a comeback. Look closely and the message isn't just "Sorry," it's also "Sorry, not sorry." Bieber has made his apologies on this album, but he also makes it clear that he's done making apologies. His purpose, from here on forward, seems to be to be his best self and sell more records than he ever has before. And I'm not mad about it. After all, this album is definitely his best work yet.