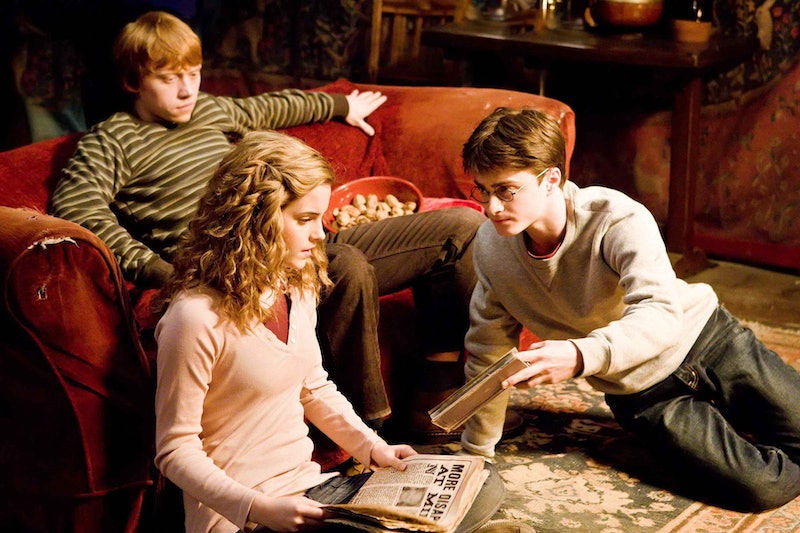 Daring. Nerve. Bravery. Chivalry. These are the qualities found in Gryffindors, aka the house of Harry Potter himself. OK, maybe if you’re a Gryffindor, you have to admit that you’re a little in-your-face about that fact. (Hello, you think it’s the best house, and everyone should know that you wear that scarlet and gold! And of course you own many outfits in those colors so no one forgets it!) But the truth is you’re proud because you make a conscious choice every day to be brave. Just because you’re courageous doesn’t mean you don’t feel fear; it just means that you look it in the face and laugh. Like a lion. Yeah, you’re a lion. Everyone can deal with that.

When it comes down to it, though, you just can’t contain your spirit for adventure. You seek like-minded individuals who want to travel the world and put that daring to use. And when you choose books, your desire is no different. You can’t resist a classic quest story, because you’d love nothing more than to go on an adventure of your own. Whether the story’s set in another world or in modern times, you can relate to the traditional hero protagonist — because you were born to play that role.

1. An Ember In The Ashes by Sabaa Tahir

This fantasy is taking the YA world by storm, for good reason: the story follows Laia, a slave girl, and Elias, a soldier, in their fight for freedom from the Martial Empire — aka it's a classic adventure story about two brave souls that will definitely appeal to Gryffindors.

Hilarious, gutsy, and cool, Amy Poehler is a perfect comedy role model for Gryffindors, and her autobiography is a great read if you're looking for something funny and inspirational. Her rise in the comedy world will leave you ready to seek out your own adventure, whether it's a career in entertainment or anything else you want to achieve.

This YA book is about a flock of genetically-altered humans who have wings — and their race to save one of their own who has been kidnapped. It's a fast-paced, daring book that I read first in middle school and kept picking up again and again. Gryffindors will definitely appreciate main character Max Ride and her fierce loyalty, nerve, and bravery. She'd be in your house for sure.

Alyss Heart is the rightful heir to the Wonderland throne, until her aunt Redd intervenes in an attempt to steal the crown. This YA fantasy, crossing from the world of Wonderland into the world of Victorian London, is a great read for Gryffindors who appreciate adventure (of the fairy tale variety). My brother, who usually only reads Harry Potter over and over again, stole this book off my bookshelf, so I can tell you it's a great read.

5. The Three Musketeers by Alexandre Dumas

This adventure story is a classic choice for the daring Gryffindor. D'Artagnan travels to Paris to join Athos, Porthos, and Aramis as Musketeers of the Guard. What follows is a swashbuckling tale sure to capture every Gryffindor's attention.

6. The Princess Bride by William Goldman

The narrator of this quest story describes how his father used to read him The Princess Bride when he was younger. He asks if it has any sports in it, and his father's reply about what the story is about sums up why this should earn a spot on every Gryffindor's bookshelf:

7. Pride And Prejudice by Jane Austen

So, maybe Gryffindors can be a bit stubborn and big-headed — not unlike beloved hero and heroine Mr. Darcy and Elizabeth Bennet. If you love adventure, but also a bit of romance, sharp wit, and chivalry, this is the classic for you.

8. The Storied Life Of A.J. Fikry by Gabrielle Zevin

A.J. Fikry runs a bookstore, but it's not doing too well. In fact, his life isn't going too well — until an unexpected package arrives and changes everything. For those chivalric Gryffindors who just love the idea of living out a story, this is the book for you.

9. All The Light We Cannot See by Anthony Doerr

Marie-Laure, a blind French girl, and Werner, an orphaned German boy, cross paths in this novel set in World War II-era France. The beautiful prose will grab ahold of your romantic Gryffindor spirit, and the adventure will appease your yearning for excitement.

10. Little Women by Louisa May Alcott

Daring, gutsy, and brave Jo March would be in Gryffindor for sure. This classic is a great pick for Gryffindors, because it has a little bit of everything: as the March sisters navigate life, their story reads like an adventure, with some romance, nerve, and doing-the-right-thing thrown in for good measure.

This quirky YA book is an unexpected gem, and it doesn't disappoint. Beatrice Shakespeare Smith grew up in a theater, and her friends are characters from the pages of plays — both ones you recognize (Shakespeare references abound, folks) and new stories. But when the theater is threatened, it's up to Beatrice to save everyone. Cue the adventure story that Gryffindors — especially ones who enjoy the stage — will appreciate.

Verity is flying a British spy plane over Nazi-occupied France, when she's caught by the Gestapo and forced to reveal her mission. This story about the brave women pilots of the era will appeal to gutsy Gryffindors who wouldn't hesitate to go on the same kind of adventure.

National Geographic photographer Steve McCurry is probably best known for his photograph Afghan Girl , the portrait of the girl with an arresting gaze on the June 1985 cover of National Geographic. He's lived an incredibly adventurous life, traveling all around the world and sometimes risking it all in the name of photojournalism. This collection of photographs will appeal to Gryffindors who appreciate that daring spirit, not to mention it'll give you serious wanderlust.

14. Ready Player One by Ernest Cline

If you're a true quest-loving Gryffindor, this YA novel will appeal to you for sure. I recommend this to everyone constantly, because it's such a great book. Wade Watts spends most of his time in the OASIS, a virtual world online, where he searches for an easter egg left behind by the world's creator. What follows is a ton of '80s pop culture references, crazy awesome virtual reality scenes, and an adventure story that will leave Gryffindors saying, "Where do I sign up for this virtual quest myself?"

If you're a Ravenclaw or Hufflepuff, check out your own must-read books.