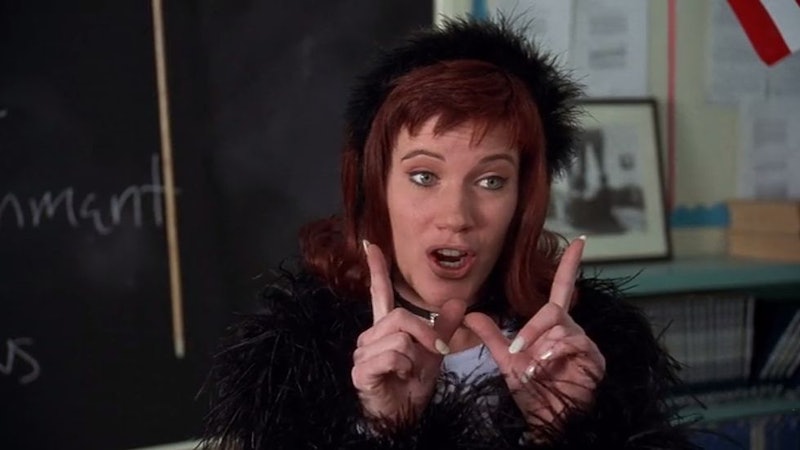 I may be alone in this, but I feel like one’s generation is a bit like one’s family: I can rag on the '90s until I’m blue in the face, and so can anyone else who was a '90s kid. But when someone who didn’t grow up in the age of Saved By The Bell and Crystal Pepsi starts making fun of that (admittedly often ridiculous) decade, I feel my hackles rise. Yes, the 90s was the age of Hypercolor t-shirts, frosted tips, and that creepy dancing baby on Ally McBeal, but we also had Nirvana and Twin Peaks, so I think we came out pretty well.

Everyone who went through adolescence or teenagerdom during the '90s will have their own things that feel sacred to them, from Tamagotchis to Where In the World Is Carmen Sandiego to early-days Britney Spears — things that feel important and formative, even if they were sometimes silly. Don’t underestimate the power of nostalgia — there are certain things for which '90s kids will fight to the death, and the sanctity of slap bracelets, flannel dresses, and Empire Records are among them.

Read on for 14 things you should never say to a '90s kid. If you do, be prepared for the mother of all comebacks: Talk to the hand, because the face ain’t listening. That’s right. I went there.

"Joey should’ve ended up with Dawson."

Are you insane? That is blasphemy. How could anyone choose this

"UGH this Internet is SO SLOW."

YOU DON’T EVEN KNOW SLOW. I remember waiting though minute after minute of garbled electronic gurgles as my parent’s computer attempted to get onto AOL — and feeling like it was all worth it because my favorite GeoCities sites were on the other side.

"One Direction is the best boy band of all time."

Look, there are three types of '90s kids: Backstreet Boys fans, *NSYNC fans, and people who said they hated that kind of music but secretly fell into one of the previous two categories. Whichever group you were in, you know that boy bands LIVE in the '90s.

"Topanga is the worst."

NOPE. YOU ARE WRONG. Topanga Lawrence is a goddamn legend.

When Mars, Inc. announced in 1995 that it was replacing the most boring M&M, kids and adults across the country went to the effort of voting the blue one into office. The blue M&M is therefore a hallowed symbol of democracy. Or America’s unhealthy addiction to sugar. Maybe both?

"The latest season of the Real World is the best."

By now there have been approximately 600 seasons of MTV’s signature reality show, but back when it debuted in 1992, there really did seem to be something new and unusual about the story of seven strangers... picked to live in a house... and have their lives taped. We were on the edge of our seats to find out what happens when people stop being polite… and start getting REAL. (Spoiler: What happens is that Puck gets kicked out of the house.)

"Ugh, I can’t stand Angela Chase’s cry face in My So Called Life."

Do you have no soul? ANGELA CHASE 4EVER, y’all. One of the things that made My So Called Life so amazing is that, unlike the “teens” we were seeing in shows like 90210, Angela seemed like an actual 15-year-old. Claire Danes’s now-famous cry face made Angela feel like a real teenager who was going through the same things that we were going through — and our cry-faces weren’t marked beautiful single tears, either (or at least mine wasn’t.)

Yes, we know that rain on your wedding day is not ironic, so much as simply unfortunate. And that a black fly in your chardonnay is gross, but, also, not ironic. BUT WE DON’T TALK ABOUT IT.

You must be a Quinn.

"As far as vampire stuff goes, Twilight is way better than Buffy."

Eww, no. BTVS is one of the greatest shows ever, inside and outside of the teen vampire genre. Buffy Summers could wipe the floor with the entire sparkly, baseball-loving Cullen clan.

"Jurassic World is clearly the best of the franchise."

You are wrong. Does the new one feature Jeff Goldblum as a mysteriously charismatic chaos theorist who likes to sardonically point out why every thing about a dinosaur theme park is wrong? No? Then your argument is invalid.

OK, now I know you’re just trying to upset me.

Um, no. The Hurt Locker may have won Best Picture and all, but Kathryn Bigelow’s greatest cinematic achievement is 1991’s Point Break. Period. What else can compete with an action flick about an FBI agent who goes undercover to catch a group of bank robbers by infiltrating a SURFING commune? Did I mention that it features Keanu Reeves playing a dude whose actual name is “Johnny Utah”? And that Patrick Swayze has a blonde mullet-y thing that mysteriously works for him, and that he says stuff like “It's basic dog psychology, if you scare them and get them peeing down their leg, they submit. But if you project weakness, that promotes violence, and that's how people get hurt”? Pure poetry, brah.

"You’re a virgin who can’t drive."

The cruelest insult of all time.