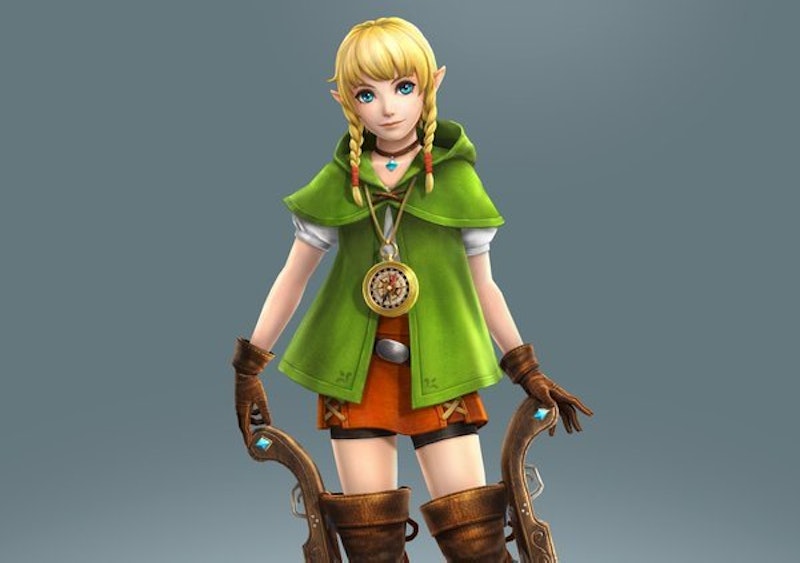 Don't look now, but one of the dreams that feminist gamers have long clamored for has finally come to pass — Nintendo has unveiled Linkle, a female version of Link, the protagonist from The Legend of Zelda series. And as you can see, she looks pretty damn cool, doesn't she?

If you're not a gamer, The Legend of Zelda is one of the oldest, longest-running, and most revered fantasy action franchises in video game history, with its first installment debuting on the original Nintendo Entertainment System (NES) all the way back in 1986. Despite the name Zelda being so prominently centered in the title, however, you rarely, if ever, get to play as her — she's typically the ill-fated princess whom your predictably male protagonist, the heroic elfin swordsman Link, is called upon to rescue.

It's a familiar formula, and that's because the damsel-in-distress routine had gotten a little (OK, a lot) tired over the last 30 years, and many gaming critics and fans have been clamoring for playable female heroes. And now, voila, one is on the way! Linkle will appear in the upcoming Hyrule Warriors Legends for Nintendo's 3DS handheld, a hack-and-slash action series spin-off on the Zelda universe.

Linkle, whose existence was first teased back in 2014 and whose name and character design make pretty obvious, is a female version of Link, albeit with some twists all her own. Rather than wielding the legendary Master Sword like her male counterpart does, Linkle rolls with a pair of crossbows, one in each hand, and reportedly will also have a spinning kick that apes the style of Link's iconic spin-cut attack.

While Linkle isn't debuting in her own standalone game to begin with, and that's a little disappointing — half-measure and all that — this is a pretty exciting reveal, to say the least. Nintendo usually does a good job expanding on and venerating its core group of character designs, both within their franchises, and in crossover titles like the Super Smash Bros. series. Simply put, if Linkle ends up being as popular as she could be, it's entirely likely we'll see her make her way into other Nintendo properties, and perhaps someday, a mainline Zelda game of her own.

It's not as if there's no demand for video games that put girls and women in the protagonist's seat, after all. When you've got parents hacking old video games to make the heroes female for their daughters, like one dad famously did for his daughter a couple years ago, that's a pretty good sign that there's a void to be filled, and hopefully Nintendo will treat Linkle well and set her up to run her own show someday. Hyrule Warriors Legends is due out on March 26, 2016.