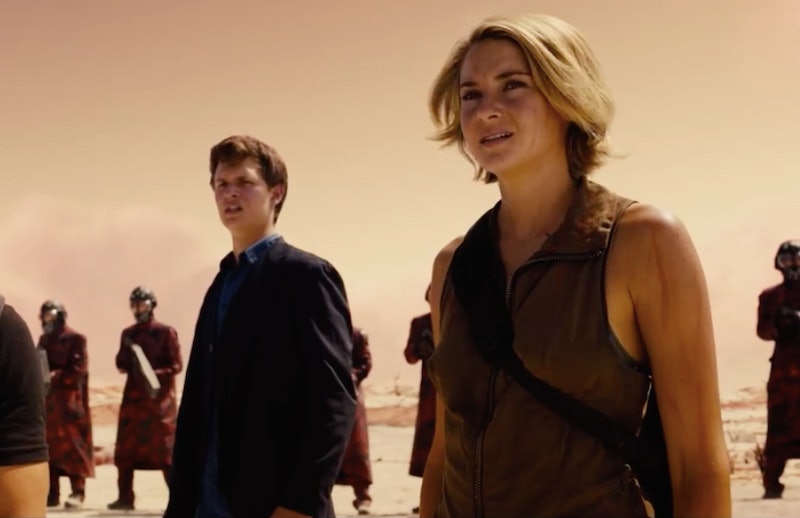 The Internet gets even more thanks than usual on Friday for bestowing us with the first trailer for The Divergent Series: Allegiant , which is due out March 18, 2016. The final book in the series written by Veronica Roth has been split into two movies, and Allegiant is the first of these. The second part, now named Ascendant according to Variety, is due for release in March 2017. So, not only do we have a lot to look forward to, we're finally getting a proper snapshot of what Allegiant will entail. And the official trailer for Allegiant does not disappoint.

Last seen in Insurgent, Tris and co. finally find out what's on the other side of the wall (your guess is as good as mine, buddy!). We're introduced to The Bureau of Genetic Welfare, and their head honcho, Jeff Daniels (wait, Harry from Dumb and Dumber is, like, smart now!?) who seems to have a lot of prisoners. According to Variety, these Genetic Welfare creeps "hoped a group of people taken from a failing society would be able to heal themselves in a 'safe place' like Chicago." But that's not going to happen or something? Let's just look at some of the things that happen in the trailer and figure it out together, OK?

1. The Group Finally Get To The Wall

Yay for them! I think?

This ship looks like it's heading for the ground in the worst way.

3. Tris And Four Are Loved Up

They're either about to head butt or kiss. All bets are off.

5. Everyone Jumps Off A Cliff

The gang decide to go abseiling. Not sure why, but it looks fun!

6. The Other Side Of The Wall Looks Like A Prison

In the trailer, we're told that everyone knows who Tris and co. are because they've been watching them, a bit like Big Brother. Well, that's unsettling.

Watts plays Evelyn, a leader of the Factionless, and, in the trailer, says, "People think walls separate us. But they also protect us."

"Is it worth sustaining this population that's determined to destroy themselves?"

Mission Impossible style. I'm going to keep an eye on Theo James from now on.

Such skill! He doesn't even have to look at his target! Wow. Just wow.

12. Harry From Dumb And Dumber

I told you he was in it!

I will watch anything Spencer is in, so I'm excited to see how her role in Allegiant turns out.

14. The A Fault In Our Stars Reunion

I can never get my head around the fact that Shailene Woodley and Ansel Elgort play brother and sister in these movies. Seems wrong. Just me?

Woodley looks pretty badass in these movies, flying this crazy space craft and all.

Look at her hair! New #StyleGoals right there.

Wait, is that the craft that Woodley was just flying?

In case you forgot.

All in all, this movie looks action packed, and we've not got long to wait now. Watch the full trailer below.