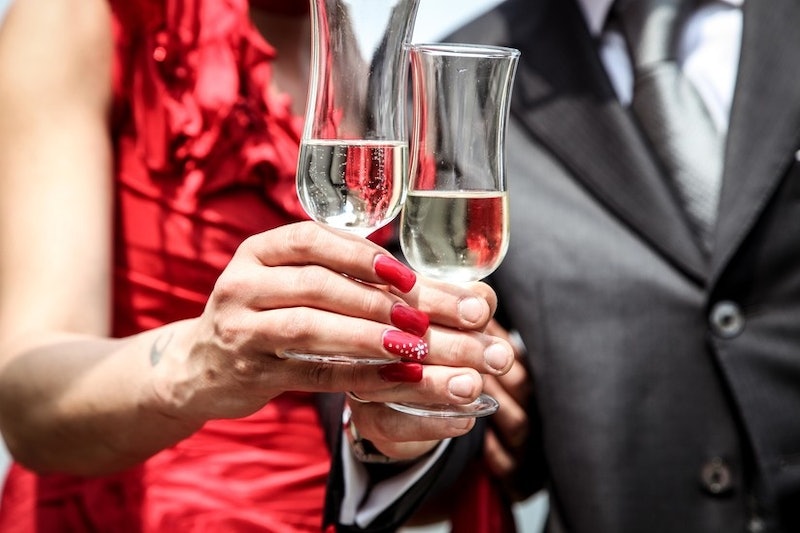 Relationships aren't easy. But most of the best things in life aren't supposed to be. A relationship can end for a number of reasons and it can be hard to seek out those signs that it's time to break up. Of course, nothing is ever perfect and it's not always going to be rainbows and butterflies. You'll hit your rough patches, you'll have your doubts, you may get comfortable, and you may get scared. It's all part of this whole big complicated thing called love. But I'm not saying anything new here.

When things go a little sour, it can have you wanting to jump from that relationship before the waters get real rough. But it's important to know when it's better to just ride it out. Because giving up on something great too soon and not giving it a chance may be something you'll regret later on. You don't want to be that old lady from the classic movie scene, chilling in her rocking chair, sifting through old photographs and love letters and tragically reminiscing over a love lost. Cue Katy Perry's "The One That Got Away." So if you're thinking about putting an end to things, here are 11 wrong reasons to break up:

Maybe you both have a lot going on and the timing "just doesn't seem right." But if things have been good and you're both happy overall, that shouldn't be a reason to call it quits by any means. If your head and your heart really aren't in it anymore, you'll know. But don't blame it on timing. Because that's an excuse, not a reason. As pointed out on eHarmony, the way to tell the difference between an "excuse" and a "reason" is that a reason is usually followed by a "solution" whereas an excuse isn’t. If you really want to be with someone, you will at least try to make it work when faced with some external obstacles like time.

As the relationship progresses, you'll both get to know each other at a super intimate level that includes the good, the bad, and the ugly. Really getting to know someone you care about and letting down those walls to really be yourself in front of that person certainly takes a lot.

As Dr. Gail Saltz told TODAY, nagging, disdain, and contempt can all end relationships. You get into vicious cycles of resentment and start noticing more things that can irk you about your partner. Saltz suggested being more aware when voicing irritations, emphasizing the positive, and making a little "habit-trade" with each other. Because relationships are all about that compromise.

3. You're Not Always Happy

Like anything, relationships have their rocky moments. Or even just their "blah" moments. And if you're in a relationship rut, that doesn't always mean you have to break up. As pointed out on eHarmony, a relationship doesn’t exist just to make you happy. It’s not supposed to solve all your problems or serve as an escape from all the shitty things. Your partner is certainly there to support you, but that's not something your happiness should be dependent on. Never forget to always work on yourself. Because to have a meaningful relationship that works, you have to work. So no, things may not always be perfect, but don't immediately cast the blame on the relationship before first examining the bigger picture.

So you started dating and in the beginning, you may have overlooked the fact that your hobbies and overall interests don't exactly align. You even found it endearing and didn't really notice much. But maybe as you've started spending more time together, while you still really care for this person, you've caught on that maybe you're not as alike as you thought. And that's OK! As counselor Stephanie Sarkis, Ph.D. pointed out in Psychology Today, couples with very different interests can have healthy relationships — what counts is that they share common goals and values.

5. Your Partner And/Or You Are Attracted To Other People

Just because you've started dating someone, doesn't mean you've suddenly become the last two humans on the planet. There are always going to be other attractive people. Walking the streets, on magazine covers, even at school or work. You can admire and acknowledge at a healthy distance — it neither makes you unfaithful nor less attracted to your partner. It's just important to take note of when this does interfere with your feelings toward one another.

Some fighting is healthy in a relationship. It shows you both care enough to even get into an argument over something. But of course — it all depends on what it is you're fighting about and how you're going about it. As pointed out on Dr. NerdLove, a sex and relationship site, fighting isn’t a sign that something’s wrong with a relationship, nor is never fighting a sign that everything’s perfect. Dr. NerdLove pointed out that as long as you’re fighting fairly, sticking to the issue at hand without deliberately trying to hurt each other, and taking the time to try to understand your partner's perspective, fighting doesn't mean it's the end — just that you have some things to work out.

Oh, one of the green monsters that seems to be the root of so many problems. According to eHarmony, a couple's financial conflicts can range from significant differences in spending habits, differences in tolerance for credit card debt, instances in which one partner allowed the other to have full control over finances only to learn bad investments were made — the list goes on. Especially when finances are super tight, tensions rise and you may find yourselves more on edge and arguing over the smallest things. The trick here is to communicate. Be honest, open, and collaborative, and know that you may be required to make a compromise or two.

8. The Honeymoon Phase Is Over

There will come a point in the relationship when some of the allure is gone, the familiarity kicks in, and the initial sparkle of excitement may fade. You start putting up with less of each other's shit, and you're not necessarily 100 percent all the time. No, it doesn't mean your relationship has hit rock bottom. Just that you're in something real.

Psychologist Dr. Joy Davidson explained to GlobalPost that the more you get to know someone, the more apparent it becomes that the individual is not perfect, which may lead you to think you haven't found the one. Davidson suggested that by being aware that the honeymoon stage is not reality, you make your relationship more likely to last.

9. They Don't Fulfill Your Fantasies

By fantasizing and placing those high, invisible expectations, you're only setting yourself up for disappointment. If you want something that badly out of your partner, tell them! They can't read your mind and they shouldn't have to. And if you do happen to communicate some of the things that you want and they're simply unable to meet those expectations, weigh in how important and how much of a priority that is to you when set up against the value you place on the relationship and your feelings for that person. Is it really worth the breakup?

As Neha Baid wrote for NewLoveTimes, we all make up these unrealistic fairytales about how our relationship is going to be, and when the real world doesn’t measure up to it, we tend to resent our partner for it. It helps to hone in on these things to evaluate their actual necessity in your relationship.

Feelings can be scary and intimidating. Sometimes we can't exactly make sense of them, and what we can't understand, we tend to push away. According to marriage and family therapist Shelly Bullard, when we don't realize that it's normal to feel scared, insecure, doubtful, and off-center with the people we love, our minds begin to doubt the relationship as a whole. Bullard told MindBodyGreen that it's important not to equate challenges in a relationship with something being wrong. Every relationship comes with its own emotional rollercoaster, but it's so worth sticking it out for the ride.

With being afraid to feel too much, comes the fear of commitment. And it's important to remember that having a fear of commitment isn't necessarily a bad thing. There are times in your life when you're really not ready or you haven't met the right person yet. But when you've found something good, especially if it's the first time in a while — or ever — it can take you by surprise for sure, and that can be scary as hell.

But if this is one of those feel-it-in-your-bones, butterflies-in-your-stomach, heart-racing type of things, don't allow that fear to let that special thing go.