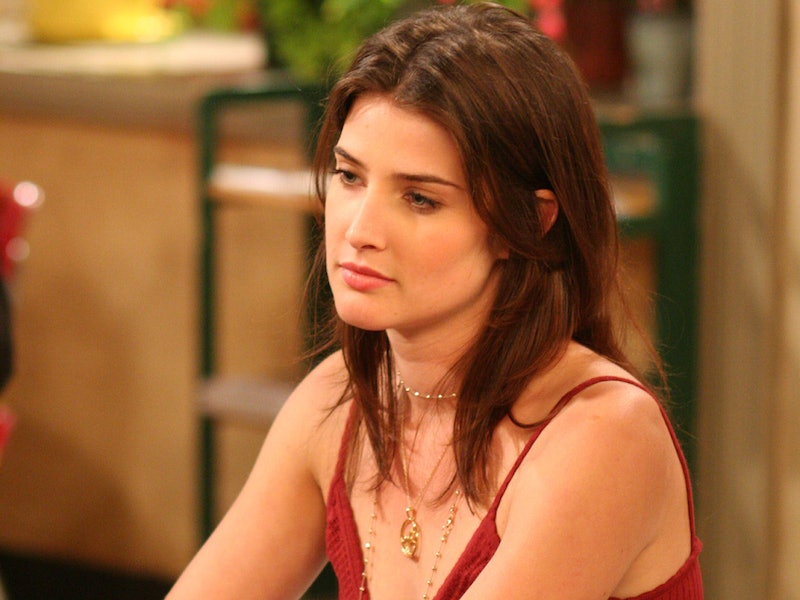 Fans of the popular show How I Met Your Mother were undeniably up in arms over the show's unsettling conclusion, and the ultimate fates of the characters we had all come to know and love. But it was the character of Robin who seemed the most unfairly represented: The show portrayed her as indecisive, "overly" career-driven, and a classic "commitment phobe". It is implied in the series that her inability to commit to Ted is what led to her unsuccessful marriage and a debilitating loneliness that somehow seemed to discredit all of the amazing work she was doing around the world. In other words, her fear of commitment was punishable, and could only be resolved in the end of the series by her eventual reunion with the very man she couldn't commit to in season one.

Robin isn't the only woman who has been cast in a bad light for her wariness of commitment in pop culture. One of the most popular songs of this year was 2014's "Don't," in which Ed Sheeran verbally slams a past lover (allegedly Ellie Goulding) for not being exclusive with him, a rage that seems unwarranted when he himself even states:

Here is the pattern that I notice, both in observation and as a person who has been accused of being a "commitment-phobe" in the past: we are almost always upfront about our expectations, our needs, what we're offering to someone else, and our limitations. We are honest about what we do and do not want in the long-term. And yet somehow, when the other person eventually cannot reconcile them, we are the ones who are assigned the blame when things fall apart.

"Commitment-phobe" is often a term used to guilt trip people, to make them feel selfish, or somehow less than a complete, emotionally viable, responsible human. I don't think it is fair for people to be branded with these implications, because it is not an accurate representation of the thought process behind our aversion to commitment. People accuse us of not thinking of our futures when the truth is this: Our unwillingness to commit stems from that very consideration. We are thinking of the future. I would argue that people who "fear" commitment are, in fact, more forward-thinking than the people who rush into commitment.

I should also clarify, since there seems to always be confusion around this point, that an avoidance of commitment is not synonymous with a habitual negligence of one's responsibility. Actually, most people avoid commitments because they take their responsibilities quite seriously, and want very much to uphold everything they are responsible for to the best of their ability.

In fact, it is strange to me that we are often portrayed as careless or selfish, when oftentimes it is the exact opposite. I consider myself a very intentional and deliberate person; I do not make decisions lightly. It is not that people who avoid being overly committed are unwilling to make commitments—we just make them sparingly. When we do take that chance, we understand the enormity of ourselves that it demands, and we enter it wholeheartedly, ready to sacrifice what needs to be sacrificed in order to make it work. And if that commitment involves another person, we are especially cautious and respectful of the impact that it will have on their lives.

We don't commit because we do not want to rush into something that could ultimately, realistically fail. That risks not just letting us down, but hurting somebody we love even worse.

I consider myself a passionate romantic, but I do not believe in soul mates. I believe that there are many people in this world each of us could be happy with and possibly spend the rest of our lives with. That being said, I have been accused of being fickle and of fearing commitment because I have not dated in years, and have in fact only had one serious relationship in my adult life. But the truth is, if I don't see a future with somebody, I am not only concerned about wasting my time with them, but doubly concerned about them wasting their time with me. I would never want to string someone along about something I wasn't entirely confident about out of respect for them. In what weird, pushy world is that considered anything other than a demonstration of someone who has incredibly respectful, healthy relationship practices?

And for a moment, let's just put all the romance of it aside and wonder this: Why does it inherently bother some people that other people do not want to settle down? I feel like I can never forgive the writers of How I Met Your Mother for the miserable existence they fated Robin to, when there are so many women in the world who are fulfilled by their career successes alone. It is unlikely that she could have accomplished the many amazing feats that she did if she had been "with" someone, whether it be Ted or Barney or anyone else. It made sense for her to remain alone during that time in the series to accomplish her dreams. I don't understand, though, why that choice had to be portrayed in such an unfavorable light, so that Ted gets to come around like he is in the role of "forgiver" and let Robin back into his life.

I don't think any of this needs forgiving. Commitment-phobes shouldn't have to apologize for being the way that they are, because ultimately we are concerned with sparing other people unnecessary pain, even at the expense of our own short-term happiness. It is time that people stop using the term "fear of commitment" as a passive-aggressive method to manipulate people into making decisions that they are justifiably cautious about, and see it for what it really is: respect for ourselves and other people, and the maturity to know that huge life decisions take careful consideration and time.