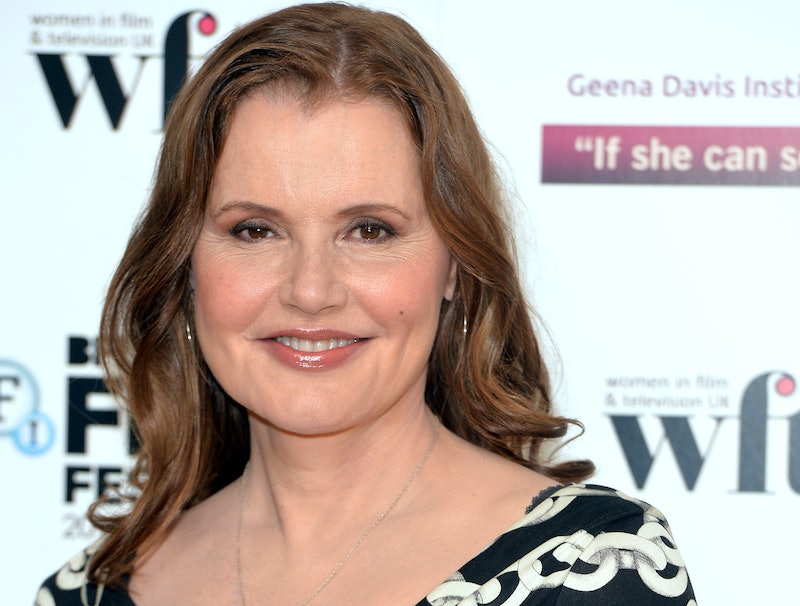 Most of us probably best know Geena Davis as the star of iconic classics like Beetlejuice, A League of Their Own, and Thelma and Louise. But, many might not know that in addition to playing badass female roles, Geena Davis is a feminist hero and outspoken activist. She has been a supporter of such causes as Title IX, representation of women in children's films, and diversity in the entertainment industry. Also, were you aware that she was almost an Olympic archer?

She's recently spoken out in the media about the increasingly buzzy issue of equal pay for women in Hollywood. On Saturday, The Hollywood Reporter published an interview with Davis in which she discussed these recent conversations, including a recent interview in which Angelina Jolie said that she was more interested in being seen as a director than a female director. While Davis understands the sentiment, she argues that "we have to keep in mind the tremendous amount of unconscious bias against women." She also spoke about the tremendous influence that a woman U.S. president would have on women and girls, as well as the many different manifestations of unconscious biases in Hollywood.

This is certainly not the first time that Davis has proven herself to be a feminist in her actions and words; here are a few moments among many in which she has been our feminist hero.

When She Founded An Organization For Gender Representation

Davis is the founder of the Geena Davis Institute on Gender in Media, which has conducted extensive research in representation in movies, alongside educating creators on disparities and how to fix them, and advocating for change. You can learn more about it here.

When She Focused On Children's Media

We often hear about feminism and the lack thereof in movies targeted at adults, but Davis has frequently focused on the representation of girls in children's media. A study conducted by the Institute has revealed disparities both in the number of male and female speaking characters in children's movies and the types of roles they are given, and she has spoken out about how important it is for children to grow up with images of fair representation.

When She Started A Film Festival For Diversity

The Bentonville Film Festival, which started in 2015, is dedicated to providing a voice to women and minorities, and it guarantees that the winners of the festival will receive commercial distribution. The films entered are required to have women or minority behind-the-scenes leaders and crew members in addition to at least half of the cast either female or other other minorities. What a great idea!

When She Talked To Girls About Title IX

Back in 2002, Davis created a program called Geena Takes Aim that focused on getting more athletics into girls' lives as well as educating them about Title IX and women's rights. Davis herself discovered sports at age 41, and she wanted to help more young women get into athletics at a younger age.

When She Insisted That Small Improvements Aren't Enough

While some people may see one successful feminist film as meaning the tides have changed, Davis has often been that voice that insists that we haven't won until there's gender equality in every facet of the entertainment industry. After Jennifer Lawrence penned an essay about her own struggles with sexism, David wrote an essay for The Daily Beast criticizing those who are overly optimistic about this moment in culture. Being that voice isn't always easy, but it's an important perspective for a celebrity to take.

When She Mentioned An Easy Way To Create More Female Roles

In a recent interview with Vanity Fair, Davis mentioned a very easy way for more women to be in films. When she meets with producers and executives about starring in movies, she suggests that they "look at the movies you are already going to make, that you have planned out and slated, and just go through [their scripts] and change some first names to female names. Just with the stroke of a pen, you’ve now created probably very unique un-stereotyped female characters." Now, that's not to hard, is it?

While Davis would be the first to admit that playing feminist characters is not always an option for women, she admits to being pretty picky about the roles she plays. From her first role in Tootsie to the phenomenal feminist classics Thelma & Louise and A League of their Own to her role as Dr. Nicole Herman on Grey's Anatomy, she has been in many of the most feminist films and shows of the past 50 years.

Davis has been tireless in her efforts to promote women and diversity, especially in her own industry, but let's take her advice; while she is doing amazing work, and many others are too, there will not be enough people fighting until the ratio of women to men are equal in the majority of industries and professions.