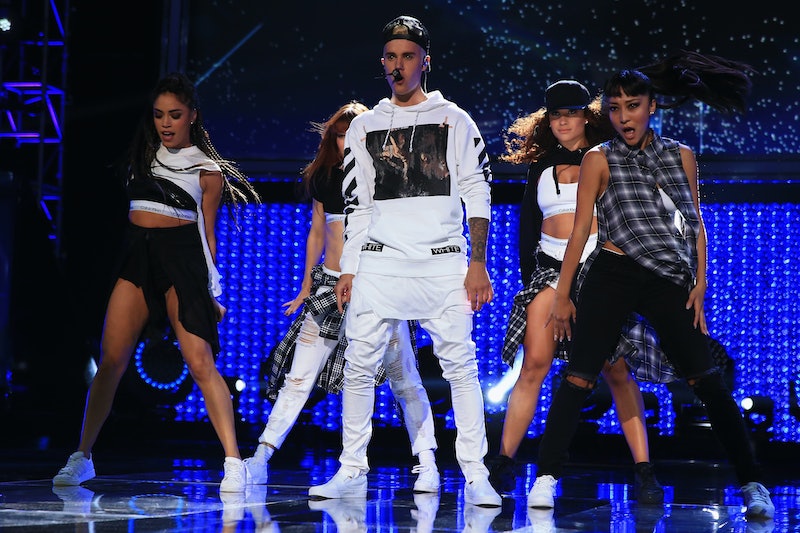 Most music videos aim to underline the music by tying it to a flashy or somehow representative visual. But when the video for Justin Bieber's "Sorry" premiered, the music was totally overshadowed by the dancing and antics of an all-female dance crew. Seriously, it's colorful and self-referential and a little bit self-mocking and totally genius. The same director who made the "Sorry" video happen is now responsible for Justin Bieber's Purpose: The Movement , the hour-by-hour video releases occurring all day Saturday. So who is Parris Goebel, the Purpose director?

The New-Zealand-based choreographer behind "Sorry" and Purpose: The Movement is a dancer in the all-female dance squad ReQuest (which she started at age 15), which comprises the same women who dance the "Sorry" video. She assembled the video using her own wardrobe over the course of two days, sent it off to the Bieber team, and they (predictably) loved it. It spawned "audition tapes" from the likes of Lena Dunham, who gave Goebel an Instagram shout-out shortly after the actual "Sorry" video premiered. Though Goebel has shot into the spotlight (she was also the subject of Rolling Stone and MTV features) since "Sorry" premiered, she's got quite the resume behind her, too.

Here are just a few names for whom she's choreographed: Jennifer Lopez, Nicole Scherzinger, Nicki Minaj (and Beyonce, by way of "Feeling Myself"), Cirque du Soleil, and Janet Jackson. Fellow New Zealander Lorde is a self-professed fan. She appeared in Step Up 5, though she told local New Zealand site Stuff that "I didn't like dancing on camera that much. It's a little bit boring." It's unlikely that any of Goebel's moves could ever be boring, and here's proof by way of the best ReQuest choreographies out there right now.

ReQuest also tackled other artists, including those they weren't hired for. They performed "711" themselves, and the video is pretty amazing. And 4.5 million fans have taken note — the video has racked up millions of views since it went live in December last year. Goebel posted an Instagram video of her "711" choreography, captioned "Bey. Hire me already." Goebel's loyal fans jumped to her defense, making the leap from "Hire me already" to accusations that Beyonce's choreography had copied Goebel, according to a separate Stuff story. Beyonce's fans similarly came forward to point out that Bey had been using similar moves as far back as 2007. Really, it's just evidence of the affection Goebel's fans have for her work, such that it rivals Beyonce's own Beyhive.

According to the caption, the crew choreographed this one just the day before they performed it. Maybe Beyonce really should think about hiring Parris Goebel and ReQuest.

An apparently spontaneous solo number by Goebel, proving that she's just as great alone as in a group.

No wonder Nicki wanted to hire her after this. Goebel choreographed for the PinkPrint tour, posting to Instagram, "You have impacted my life more than you will ever know."

Even in just the shortest clip, Goebel brings it.

This clip went live back in 2012, but it deserves attention now more than ever with Missy's reemergence into the rap scene. Maybe she'll consider taking Parris Goebel under her wing?

At just 24, Parris Goebel has already worked with some of the biggest names in music — and even bigger names in the dance scene. Between her talent for choreography, production, and directing, she's definitely going to be an even greater fixture in pop culture with the boost from all her work with Justin Bieber.