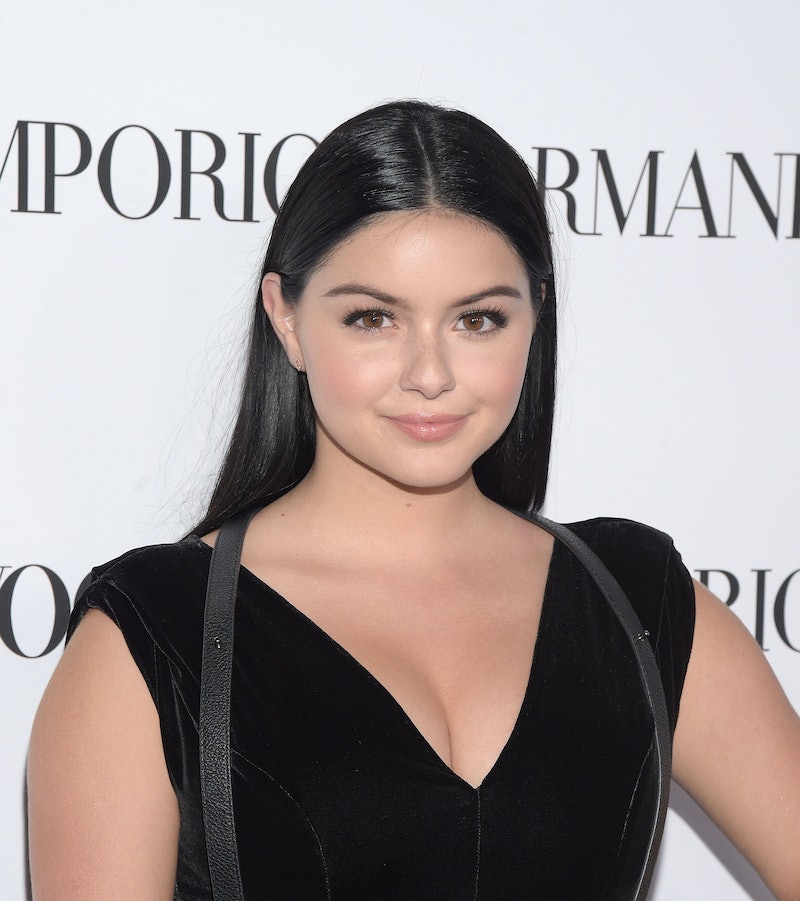 The use of Instagram to promote body positivity and bring attention to social issues has been utilized repeatedly by celebrities and non-celebrities alike. Once again, the image platform has come to the rescue. Ariel Winter stood up against slut shaming on Nov. 14, People reports. It comes as no surprise, really, seeing as Ariel Winter has taken a strong stance for body positivity on numerous occasions.

For instance, there was that time she emphasized the positive reasons behind her breast reduction. Or her Aug. 2015 Glamour interview, which was packed full of quotable body posi gems. She's not shy about supporting others when it comes to body shaming, tweeting Ariana Grande in solidarity after social media users decided it was appropriate to compare the two women. Time and time again, the actress has shown that her positivity may be pushed at times, but it will never falter. She even manages to present her views with wit and charm when outrage would honestly be completely understandable.

It started when Winter posted this perfectly innocent pic on Instagram, a #fbf of she and her nieces enjoying the waves and each other's company. It's not the sort of image most people would deem "controversial." But unfortunately, with the Internet being the Internet, the sexist body shamers crawled out of the woodwork to abuse Winter and her family picture, telling the 17-year-old that was "asking for it," as People reports.

As Winter wrote in her caption, she is able to see past the comments of Internet trolls, but not all of us have that ability. Speaking out against these people's obsession with belittling others online is not just an act of body positivity for herself, but for anyone who may be watching.

Who knew that an innocent photo with my nieces would turn into this? The height of a girl's skirt or whatever she is wearing for that matter, does not imply what she is asking for. It sickens me to think at 17 years old, a photo of myself with my nieces is suggesting that I'm "asking for it." I typically never give power to the mean things people bravely say behind their computer screens on the Internet, but this is for the girls who are constantly bullied whether it be online or at school... You are not asking for anything because of what you are wearing — you are expressing yourself and don't you ever think you deserve the negativity as the consequence to what you are wearing — YOU ARE BEAUTIFUL. Celebrate you and don't let anyone's comments allow you to think less of yourself. Us girls have to stick together!!!!!!"

When you think about it, it's nothing short of a shame that our society demands this level of social activism from a 17-year-old girl. It's distressing to see that Internet trolls and pervasive media will comment on the body of a teenager until she feels she has to stand up for herself — and for others who are similarly abused. Although I absolutely adore Ariel Winter's body positivity, I can't help feel somewhat sad that the world forces people to have to take such a stand at such a young age in the first place.

Thankfully, Ariel Winter's self love mission isn't one that is undertaken just for herself, but for all women. As she has said, we need to "stick together" and remember that we are beautiful, no matter what anyone else may say.