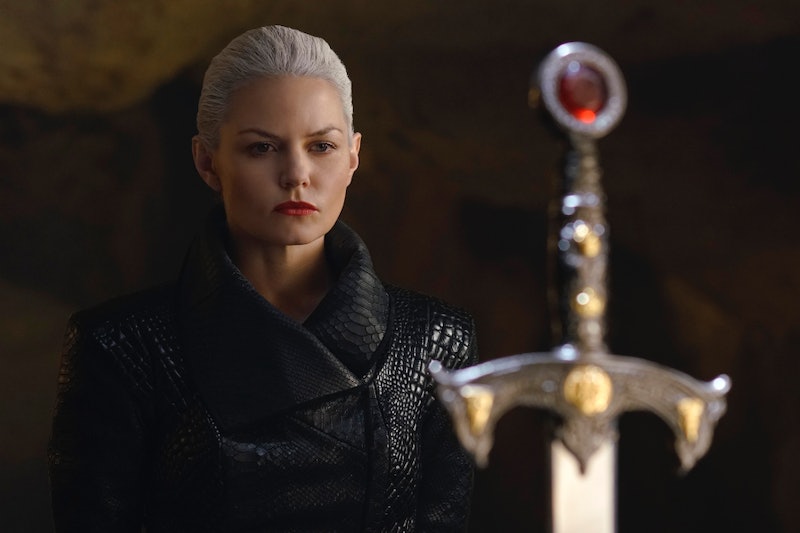 Well, well — it's all kicking off on Once Upon A Time Season 5, isn't it? Our trusty former savior Emma has gone full-blown Dark One on us, and she's got big plans. Well, she had big plans, one of which has already been achieved: Emma managed to reforge Excalibur, reuniting the broken sword with the Dark One's dagger. It's a rather dangerous weapon, capable of completely destroying the dark or the light. I assume that Emma's plan at this point is to snuff out the good stuff (though what she believes she'll achieve by doing this, who knows?) but am I actually right about it? As it turns out, Emma's plans for Excalibur are apparently about Hook. Say what?

It's no secret that I'm not a Captain Swan 'shipper, and in fact I believe it's probably the most toxic relationship Once has ever portrayed, but did it need to come to this? Emma was willing to break her son's heart and completely screw over her parents and the woman she sacrificed herself to the Darkness for because of her boyfriend? Apparently so, if the preview for Sunday night's two-parter is to be believed — and frankly, I don't even know what to say about that.

After Hook gets himself into a rough spot with Arthur, the Dark One comes to Hook's rescue (even though he doesn't deserve it) and he suddenly changes his tune from a few episodes ago. If you'll remember, Hook got frustrated that he doesn't share True Love with the Dark One, and with the fact that the Dark One wasn't interested in playing Savior to suit his fancy, and he basically told her he doesn't love her anymore. Now he pulls the classic "it's complicated" move and claims that he knows Emma is still inside her and he wants to help her. But first, he needs her to tell him what she's up to with Excalibur. She obliges and tells him that she's doing this all for him. Again I ask: say what?

Look, Once is a show that loves to troll its fans, so I don't for one second believe that we haven't been misled with the preview above. Because of that, I know I should hold my judgment until the episode airs, but the fact that the powers that be even needed to stoop to that level is pretty obnoxious, and if in some universe they completely jump the shark and Emma really has become so awful for the sake of a man, the show might as well pack it in at the end of Season 5 because it'll have lost all credibility.

After all, Once is a family show — the "family" clearly being made up of Snow, Charming, Emma, Henry, and Regina. That's not to say that there isn't room for that family to expand (though please god, not with Hook) but that I don't for one second believe Emma was willing to give all that up for a guy. Not when the entire show has been built on the idea of women being strong, capable, and independent. I'm not buying it. Because of that, I'm just going to assume this is meant to mislead us, because I don't think I can handle a Once that would sell out its women so easily.