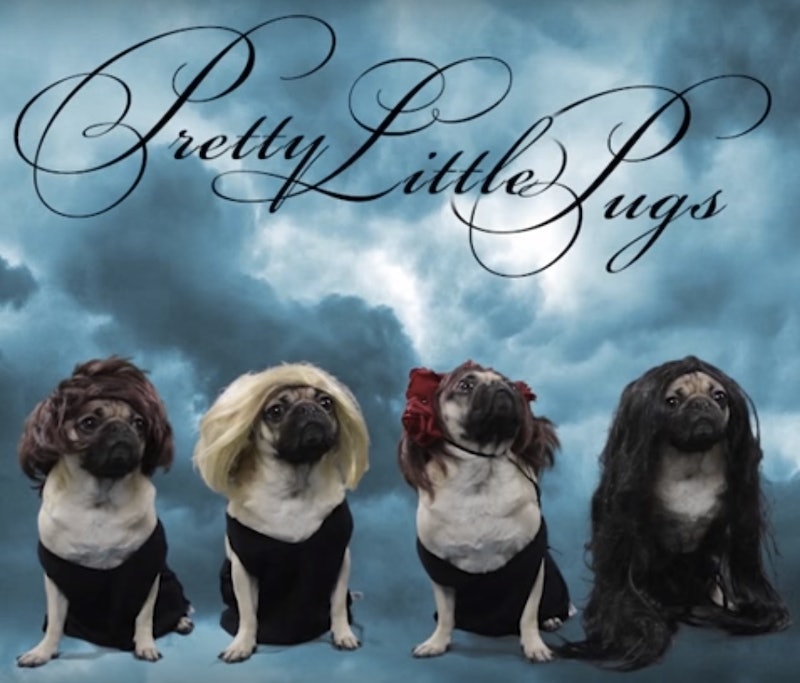 I love dogs. Like, a lot. But, aside from my own pup, I think out of all the canines in the world, I may love Doug the Pug the most. I'm sorry, I'm admitting full bias here, but I think after you read what I'm about to tell you, you'll agree with me, too. You see, Doug the Pug reenacted Friends' opening credits (and that of many other shows) in a "TV Show Compilation" that saw the dog taking over beloved series' title sequences. And after watching it, my life has been forever altered for the better. How? Well, now when I get a little bit salty over watching the same damn opener on a Netflix marathon, I'll think fondly of Doug's versions instead. So, so fondly.

The best thing about Doug's TV show compilation is that it's an equal opportunity parody, encompassing shows both old and new, in a variety of genres. The compilation touches on everything from Friends to Dexter to The Hills. Basically, there's a pug opener for everyone because Doug just cares. Well, that and the fact that he has an extensive knowledge of pop culture and what people want and knows how to deliver. I guess we should probably give some props to his owner, too. Because this? It's good, guys. It's really good.

You can check out "Doug the Pug's TV Show Compilation" below, and plead to the Academy with me in solidarity to nominate him for some kind of award.

Here are the different shows Doug so eloquently covered:

"The Rachel" looks phenomenal on him.

The Fresh Prince Of Bel Air

This is terrifyingly adorable.

Sorry, one GIF of this just wasn't enough:

The glamour, the intrigue, the wigs.

Pug Swanson is my new hero.

He has such range as an actor.

Do I think Doug could get an internship at Teen Vogue? Yes, yes I do.

I can't speak for her, but I think he's done Mariska Hargitay proud. Two paws up, Doug.

Given his acting prowess and clear rise to fame, I am left patiently awaiting Doug's E! True Hollywood story. Hope it's a good one. Who am I kidding? Of course it will be.