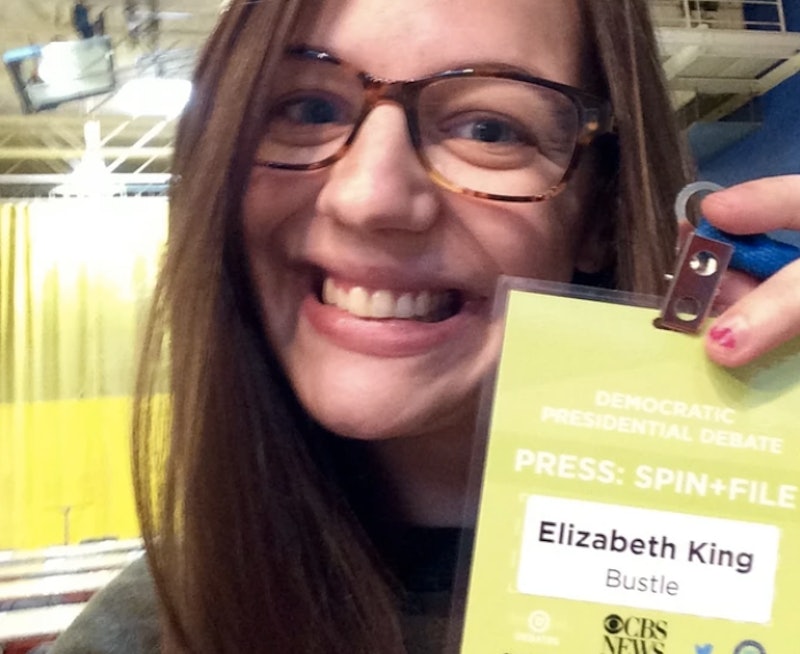 So, you guys watched the second Democratic debate on Saturday night, right? It was great and lively, and I feel like we actually learned some new things about the candidates. Because I was lucky enough to snag credentials, I learned so much about the debates in general and was able to see the Democratic debate from behind the scenes. I can tell you right now it was unlike any experience I've ever had before.

As a member of the press, I was allowed to access the press filing room, which was a giant space set up for reporters and journalists to set up shop (we also got to watch CBS all day on giant screens, which was pretty cool, too). In addition to the press filing center, I hung out in the spin room, which is where I camped out to watch the debate with a few other people (because hello, I wanted to see the debate and watch the commentators in person). But as soon as the debate ended, the room was flooded with every reporter there, along with surrogates for each of the three candidates. It was so crowded and frenzied I hardly knew where to turn my head or point my recorder.

One of the best parts, however, was when we got the chance to walk through the debate space before everything began. At first I felt like the debate stage was a sacred space that we shouldn't even look at directly, but lo and behold, they let the press crawl all over the place. Yes, I did stand behind Hillary Clinton's podium.

Here's me cheesing hard after first arriving to Drake University and picking up my press pass.

This is the press filing center. Not the cheeriest room you'll ever see, but it served its purpose very well.

Mid-morning is when we got to head over to the debate hall and get a look-see. Look at all these reporters! Everyone was on their phone most of the day, naturally.

And now (drum roll please!), we have the debate hall. Security really let us go all over the place. One guy even picked up Hillary Clinton's pens from her podium! *gasp*

This is behind Martin O'Malley's podium. Note the back up pen. Also note that it was really hard to get any photos without someone else's arm or hands in them.

So many video cameras.

I really wanted to sit in those moderator chairs, but I'm clumsy and didn't want to somehow knock everything over. I did touch it, though.

Over in the spin room, I saw some pretty great people that I am sure you will recognize as well. See the woman in the light blue blazer? That's DNC Chair Debbie Wasserman Schultz a minute or two before she was interviewed for CBS News.

I got to meet a couple of really great people, too! Here I am with journalist and feminist hero, Liz Plank.

And Roy Woods Jr. from The Daily Show. I can't wait to see their segment about the debate!

And remember the massive crowd of reporters that flooded the spin room after the debate ended? It took me a good hour to finally work my way out of this crowd.

Cameras, and notepads, and cellphones, oh my! It was a whirlwind of a day. Many of us with the media were there from 9:30 a.m. local time to after midnight. Thankfully there was enough coffee and energy on Duke's campus to get me through the day! It was an awesome experience to learn so much about how debates are covered, and what the energy is behind the scenes when everyone is covering for major networks, national and local papers, and millennial sites like Bustle.

There is a lot to see and learn attending presidential campaign events live, and I'll never watch a debate again without imagining all the reporters running around to grab all their photos, interviews, and quotes.