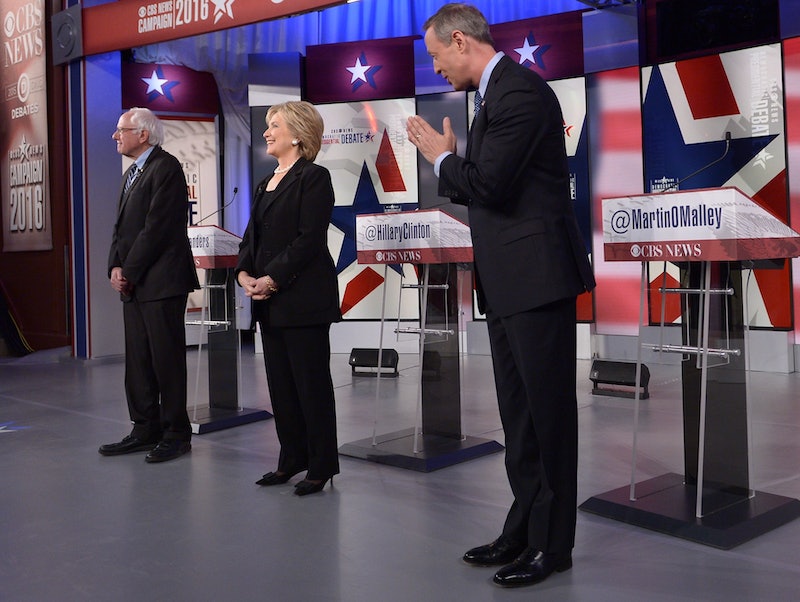 Overall, the three remaining Democratic candidates hold one another in high esteem, and are generally very respectful even when they disagree. Saturday night's second Democratic debate saw a bit of a change in tone, however. Despite speculation that the debate would be somber and that the candidates would be less inclined to go at one another, given the very recent tragedy in Paris, all three candidates came ready to lay down the law.

Hillary Clinton, Bernie Sanders, and Martin O'Malley all threw punches during the debate, and even moderator John Dickerson got a little dig in as well. While we've been happy to see most of the mudslinging happening on the Republican side of the election, the time has finally come for the Democrats to get their hands a little dirty. In fact, there were some pretty great zingers during this most recent debate.

I wouldn't go so far as to say that Clinton, Sanders, and O'Malley were out-and-out disrespectful, but they clearly were not shy about calling one another out. O'Malley especially was on a bit of a roll, and was able to successfully get Clinton on the defensive by being direct and a little cheeky. Will this be the new tone for the remaining debates? Well, only time will tell for sure. But in the meantime, it seems like the Dems are finally putting up their dukes.

Wanting to point out inconsistencies in Clinton's record on gun control, O'Malley told her that she had once tried to be like "Annie Oakley." Clinton didn't exactly engage him on this point, but it was an interesting moment nonetheless, and showed that O'Malley came ready for a real fight.

In a direct reference to Sanders' call for a political revolution, Clinton made it clear that she thinks such an idea is unrealistic, stating that she waited for a revolution, but "it never came."

O'Malley was clearly prepared to go after Clinton. He looked right at Clinton and told her that her Wall Street policies were "weak tea." My eyes went really wide, and I couldn't help but whisper "Dang, O'Malley!" under my breath.

This one was of course not directed at anyone on the stage, but O'Malley delivered a deadly stinger nonetheless when he called GOP candidate Donald Trump an "immigrant-bashing carnival barker."

"More Of A Socialist"

Wanting to pack a punch in defense of himself, Sanders threw it out there that Dwight Eisenhower was more of a socialist than himself. This one was aimed at anyone who criticizes Sanders for some of his far left-leaning views and policy plans.

"You're Breaking The Rules"

Dickerson, who did most of the moderating Saturday evening, gave O'Malley quite the condescending slap on the wrist when the former governor tried to get a comment in when Dickerson needed to go to a commercial break. In a grade-school teacher voice, Dickerson said, "Governor, you're breaking the rules ..." reminding everyone on stage who really had the power.