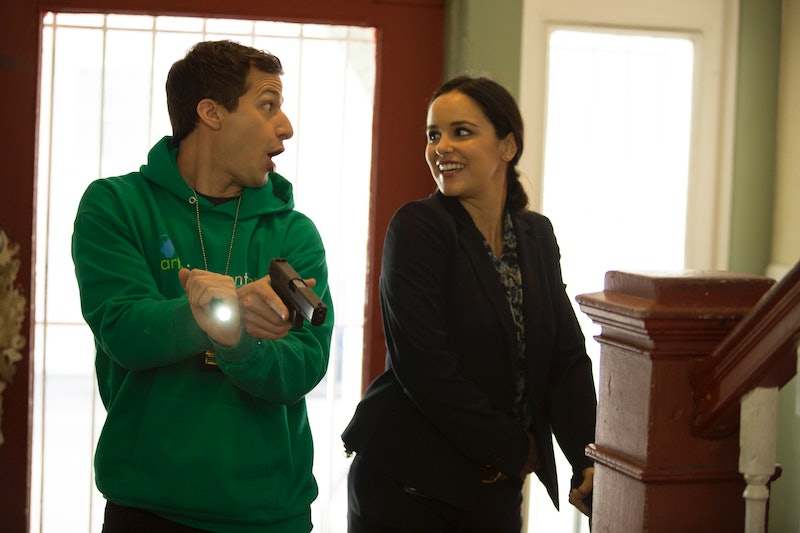 As we've seen on many a workplace comedy, it's never easy to mix work with pleasure. That has especially been the case for Jake and Amy, who have decided to give a full-fledged relationship a try this season of Brooklyn Nine-Nine . It seems like something has threatened to tear Jake and Amy a part during each episode of the series this season, and all of that was before Jake and Amy even worked their first case together. So you can only imagine how well things go for Jake and Amy when they bring their love into the field for the first time.

After Amy's source helps her track down a new street drug, and Jake brought in a perp possessing it, the detectives decided to team up on a case for the first time since making things official with one another, or as Jake likes to call it, smooching booties. Captain Holt told them that he usually doesn't put couples in the field as a rule, but he allowed it this one time as long as they didn't let personal issues affect the case.

And of course, that's all that exact thing happened when Jake and Amy became professional partners as well as romantic ones. An argument about Jake's mattress being too uncomfortable for Amy to sleep on and his reluctance to shell out money for a new one seeped into the couple's police work throughout the episode. When it seemed as though Jake was finally going to purchase a new mattress, he ultimately protested because of its high price, which offended Amy because he didn't realize that it was an investment, and Jake was making it seem like he didn't feel like Amy was worth investing in.

There was no resolution on the matter, although Charles, who seems to be the person most invested in Jake and Amy's relationship, did offer to pay for the mattress himself if that's what it took to keep these two lovebirds together. So of course this spilled into their police work even more as the argument blew up when Jake found out that Amy still hasn't told her mother that they're dating. Amy said the reason for that is because she doesn't want a constant barrage of questions from her mom, to which Jake questioned if Amy thinks he's worth it. Unfortunately, the perp that the two tried to catch overheard the conversation and found the surveillance camera they had set up, compromising the mission.

After this debacle, Captain Holt called Amy and Jake into his office separately. Though Jake thought he was going to get a stern talking to from his boss, Captain Holt actually told Jake a sweet story about when he and his husband Kevin first started dating to make Jake understand that they're both just scared of taking the next leap forward in the relationship. Captain Holt, the clever man that he is, finally made Jake see the light. He told Amy that he would buy a mattress, and Amy in turn said that she would tell her mother about their relationship.

As you can see, there was a lot of focus on Jake and Amy's relationship this episode, as has been the case in much of Season 3 of Brooklyn Nine-Nine so far. I'm glad to see that Brooklyn Nine-Nine is not only bringing the funny when it comes to Jake and Amy, but we're also getting into the intimate details and complexities of their relationship, too. However, as each episode seems to threaten to split them up, it always makes me worry for the day if or when that's actually going to happen.