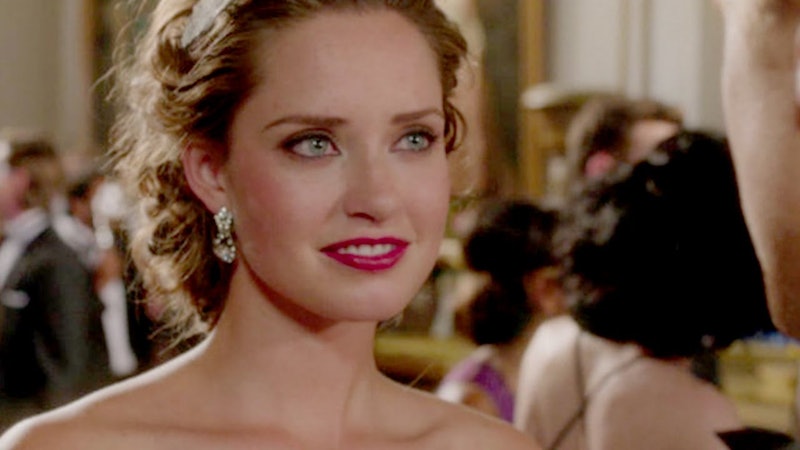 On Sunday, I was once again reminded that you cannot trust anything told to you on The Royals. For a whole season I was under the impression that Ophelia's mom had died. It was the inciting reason why her father didn't want Ophelia dating Prince Liam and getting too close to the Royal Family, since that had been what got her mother killed. It was a big deal, and, I assumed, true. But, the premiere of Season 2 changed all that because it seems like Ophelia's mom is alive on The Royals, and she must be a pretty mean person to keep that fact from her daughter, IMHO.

Now, it's not confirmed that the blonde woman talking to Ophelia's father is really her mother, but this exchange was pretty convincing:

Then the shot cut to a framed picture of her dad and the blonde woman hugging. So, if she's not Ophelia's mom, that would be pretty coincidental. I think the biggest question here, though, is why did her parents pretend her mother was dead? And, why would they pretend she was killed for being close with the Royal Family?

I can think of a couple of scenarios. One: Maybe her mother walked out on the family so Ted pretended she had died so Ophelia wouldn't feel so abandoned. Two: perhaps there really was a threat on her life due to her closeness with the royals, so Ted conspired with her to fake her death and get her out of harm's way. Or, three: Ted was imaging that she was there because he's lonely without Ophelia since she's in America and never talks to him.

Whatever the truth, if Ophelia were to find out her mother is alive and her parents lied to her, she would be furious — and I wouldn't blame her one bit.