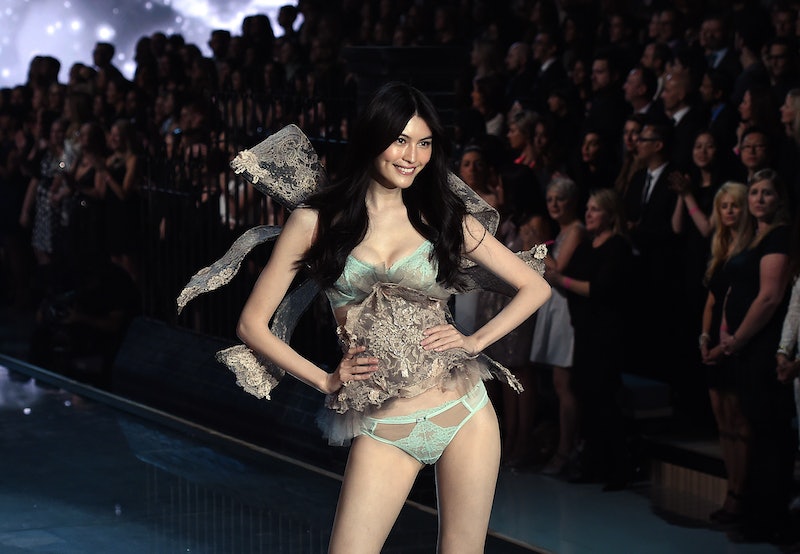 Much, if not most, of the coverage surrounding the 2015 Victoria's Secret Fashion Show has focused on Kendall Jenner and Gigi Hadid's debuts, alongside veteran VS models like Martha Hunt and Lily Aldridge. But Chinese model Sui He is no stranger to the pink silk robes and outlandishly-themed lingerie. Yet she has not received the same kind of vast recognition as her equally angelic peers. Originally from Wenzhou, China, Sui He has remained pretty low-key despite slaying the game since her modeling debut in 2010 and being a Victoria's Secret regular.

He is one of only four East Asian models who have ever walked in the Victoria's Secret Fashion Show, and just one of two Chinese models in this year's show. (The other being Ming Xi.) And though this year's Victoria's Secret Fashion Show has already been applauded for featuring one of the most ethnically diverse lineups yet — with Angolan model Maria Borges making history as the first model to rock natural hair on the show's runway — it's also important to support, recognize, and get to know the models who have been trailblazers if this kind of diversity is going to become the norm.

He's consistent appearances on the VS catwalk make up a small fraction of her totally illustrious and enviable career. Here are seven things you should know about Sui He, one of the world's most famous models that no one yet seems to know.

According to the New York Daily News, He first walked in the Victoria's Secret Fashion Show in 2011, making her the second Asian model to ever walk in the show after Liu Wen, and she's walked in every show since. Despite call-outs from fans and bloggers alike, like The Fashion Spot, and the simple fact that she's a long-time veteran of the show who's walked down the famous runway more times than Karlie Kloss, He's still not a full-fledged Angel. That has traditionally required establishing oneself as a globally renowned high fashion model first. However, she did rock some fabulous wings in this year's show.

According to Vogue, He signed up for a modeling competition in her native China in 2006, when she was only 17, and won the whole thing despite having no prior training. That competition launched her career, and the rest is history.

3. She Was The First Chinese Face Of Shiseido

When He was named the new face of Shiseido makeup in 2012, she was the first Chinese model to represent the Japanese beauty giant. According to an interview with WWD, Shiseido artistic director Dick Page explained that he handpicked He to represent the brand because "she seems to radiate a glow from within."

He debuted at Milan Fashion Week in 2010 and made her first appearance at New York Fashion Week in 2011, becoming the first Asian model to open a Ralph Lauren show. Since then, she's continued to work with Ralph Lauren as well as Anna Sui, Diane von Furstenberg, Chanel, Donna Karan, and Helmut Lang, among dozens of other designers.

Most models dream of being in the pages of Vogue once in their lives, but He has regularly been featured in the magazine's pages over the the last five years, appearing on the covers of Vogue Thailand, Vogue Australia, and Vogue China. She's also been been profiled and interviewed in British Vogue and Vogue Italia .

6. She's Worked With The Best

Appearing in the pages of the world's most famous fashion magazines also means that He has had the opportunity to work with some of the greatest creators in fashion and art. She appeared in a Mercedes-Benz ad campaign that was directed by Carine Roitfeld in 2013. She also made a splash when she appeared on the cover of W in 2011. He was then a still relatively unknown model and fairly fresh off her first season at New York Fashion Week, yet she featured in a much-lauded spread directed remotely by Chinese artist Ai Weiwei.

Though He's modeling career is still chugging along full-steam ahead, she's also been branching out to other ventures, most recently appearing in the blockbuster Chinese movie You Are My Sunshine with well-known Hong Kong actress Angelababy.

He's career has been on a slow but steady rise for the last five years, and it's only going to keep getting bigger. So keep an eye out for He, because maybe 2016 will finally be the year she gets her Victoria's Secret angel wings.

More like this
'Love Island's Will Got A Farm Animal Manicure & It's *Adorable*
By Sam Ramsden
This 'One Tree Hill' Wardrobe Error Is Going Viral On TikTok
By Brad Witter
Hailey Bieber Looks Just Like Princess Diana & I Need To Copy Her ASAP
By Sophie McEvoy
Rita Ora Joined The Cut-Out Trend With These Bejewelled Butterfly Trousers
By El Hunt
Get Even More From Bustle — Sign Up For The Newsletter
From hair trends to relationship advice, our daily newsletter has everything you need to sound like a person who’s on TikTok, even if you aren’t.