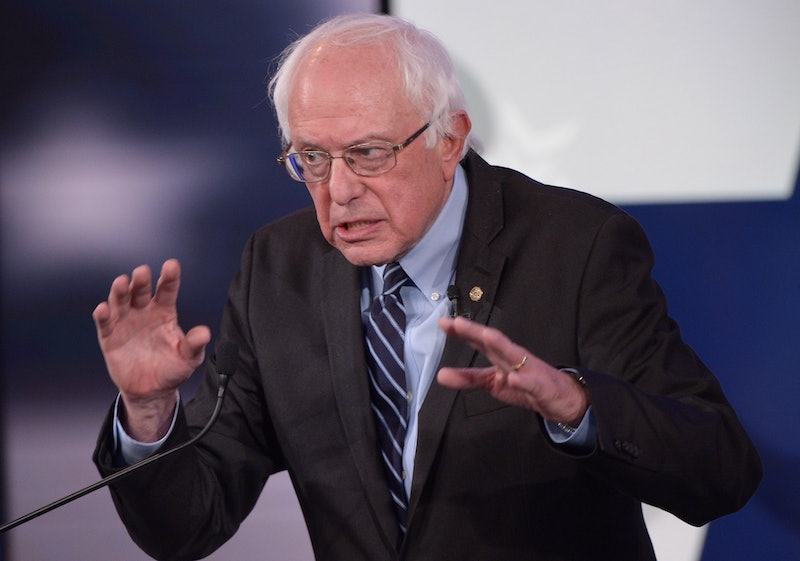 During the second Democratic debate on Saturday evening, Bernie Sanders failed to adequately address security concerns posed by ISIS in the aftermath of the Paris attacks. The presidential candidate was unable to shift gears from domestic policy to national security, and instead focused on economic policy and climate change during the foreign policy segment. This is, frankly, problematic for a man running to be the next commander-in-chief.

One day before the debate, Paris was rocked by a series of deadly explosions and shootings, for which ISIS has taken responsibility. At least 130 people were killed; hundreds more are injured and in critical condition. This has brought foreign policy front and center to the presidential race.

Each day, the terms and conditions of the world change — it's not always fair or right, but it is something the President of the United States must accept, and continue to lead the nation with resolve. So, how did Sanders react to the last-minute shift of debate topics?

The moderator, John Dickerson, told the candidates to use "an opening statement to share your thoughts about the attacks in Paris, and lay out your vision for America." Sanders was the only candidate who opted to discuss his domestic policy in the opening statement, after only briefly mentioning Paris. He said: "I'm running for president, because as I go around this nation, I talk to a lot of people. And what I hear is people's concern that the economy we have is a rigged economy."

By comparison, Hillary Clinton said in her opening statement: "I will be laying out in detail, what I think we need to do with our friends and allies in Europe and elsewhere to do a better job of coordinating efforts against the scourge of terrorism. Our country deserves no less, because all of the other issues we want to deal with depend upon us being secure and strong."

People certainly do want to hear about Sanders' economic justice plan, but not in the aftermath of a devastating terror attack. It was probably not the best choice to delve into economics, when the brutality of ISIS is leading the news.

The debate topics had abruptly changed, giving the three candidates' campaigns only hours to re-vamp their debate answers. But when a national disaster, terrorist attack, or civic unrest occur, the president doesn't have hours to prepare — he's forced to react, often within minutes. There is no luxury when it comes to time.

Sanders' opponents, Clinton and Martin O'Malley, focused on the tragedy in Paris and how America should address counter-terrorism. Clinton saw the fight against ISIS as a global effort, emphasizing the need "to do a better job of coordinating efforts against the scourge of terrorism." This point was echoed by O'Malley, who said, "We must rise to this occasion in collaboration and with alliances to confront it, and invest in the future much better human intelligence so we know what the next steps are."

But Sanders did not take their cue. When asked if the greatest threat to national security is climate change, Sanders said, "Absolutely." This may not have been the best answer in light of the recent tragic events. Sanders could have said that climate change does play a role in global security, but should have emphasized the growing threat of ISIS given the way the group had exerted its control that day. Part of the presidency is showing resolve and acting as comforter in chief — Sanders' performance was the least representative of this during the debate.

He discussed how the "disastrous invasion of Iraq ... has unraveled the region completely," and his opposition to the previous war in Iraq, but didn't offer a clear plan on how to fix the current crisis.

Instead of directly offering a foreign policy plan, in fact, Sanders provided a lengthy historical analysis.

Soon enough, Sanders switched the conversation to veterans' affairs. An important issue — but not one directly related to the fight against ISIS, at least at the moment.

When you talk about the long-term consequences of war, let's talk about the men and women who came home from war. The 500,000 who came home with PTSD, and traumatic brain injury. And I would hope in the midst of all of this discussion, this country makes certain that we do not turn our backs on the men and women who put their lives on the line to defend us, and that we stand with them as they have stood with us.

By the end of the debate, there was little clarity on exactly what Sanders would do about ISIS. On foreign policy, Sanders has advocated for the use of force as a last resort. But his best answer from the debate might have been when he said, "Muslim countries are gonna have to lead the efforts," or when he noted, "We should be supportive of that effort ... [and] this world, with American leadership, can and must come together to destroy them." But he never defined what exactly that support means, leaving the verdict out on the specifics of Sanders' foreign policy plan.

Whoever is sworn into office in January 2017 must be willing and able to shift gears at a moment's notice. An entire nation rides on the strength and fortitude of its leader in times of crisis, this is not about to change. Sanders' performance proved he's rigid and unable to lead during times of unpredictability.

More like this
You Probably Didn't Realize These Expensive Mistakes Around The House Are Actually Easy To Avoid
By Mackenzie Edwards
Why Eurovision 2023's Host City Won’t Be Revealed For A While Yet
By Sam Ramsden and Rachel Mantock
Christina Aguilera Took A Powerful Stand At Brighton Pride
By Sam Ramsden
Are John Legend & Kanye West Still Friends? The Singer’s Latest Update Is Candid
By Brad Witter
Get Even More From Bustle — Sign Up For The Newsletter