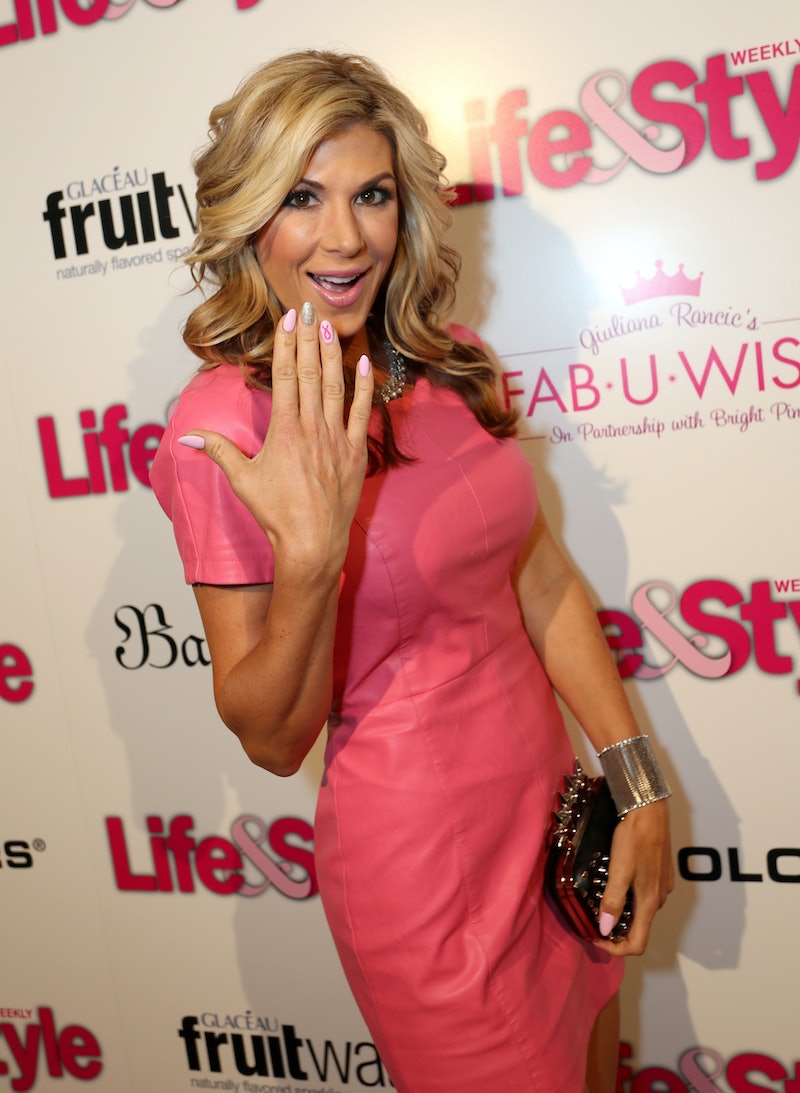 One of the most fascinating parts about watching the Real Housewives of Orange County is the chance to get an inside look at the lives of wealthy women. Sure, a lot of the ladies are "just like us" when it comes to their issues with their friends and love lives, but there are just some problems I cannot relate to simply because I am not in the same tax bracket as these ladies — well, at least most of them. Some of the women have kind of unclear financial situations where I don't really know if they have jobs other than being a cast member on the show. And then there are women like Vicki Gunvalson, who are all about their careers. Vicki, for her part, has even criticized some the other women for "not working." So, how much are the women from RHOC really worth?

Are they actually as well off as they seem? Where do they stack up against each other when it comes to their wealth? Luckily for you, I have compiled an ordered ranking of net worths for the Orange County Real Housewives.

Yes, I actually went through the financial stats for all 17 women who have been cast on RHOC. The only one whose information I could not find is Season 1 cast member Kimberly Bryant, which makes sense considering she was only on for one season when Real Housewives was hardly the phenomenon it is today.

Aside from the omission of Kimberly, there are plenty of surprises in this list. For one thing, infamous workaholic Vicki did not take the number one spot.

Peggy Tanous was only on RHOC for one season, but the only thing I really remember about her was her constant competition with frienemy Alexis Bellino. Peggy used to work as an infomercial spokesperson and model before being cast on the show. Sadly, Peggy and her husband Micah have faced some financial issues, according to Celebuzz.

It isn't super shocking to see Lynne this low on the list. I mean, she was served with an eviction notice during the show's fifth season. Lynne and her ex-husband Frank reportedly had some financial issues. And while, obviously, she earned some money as cast member on the show, as far as I can tell, her current job is her jewelry company. I feel like this would be a good time for Lynne to get back on the show. She can earn a regular pay check and get some exposure for her jewelry line. Hint, hint Bravo.

Jo was a cast member on RHOC for just two seasons and that's probably why she's at number 13 on the list. She wasn't a part of the franchise when it really started to take off, so she couldn't reap the self-promotion benefits that the more current Real Housewives have been able to. Jo started out on Real Housewive s as a stay-at-home mom to her ex Slade Smiley's kids until she started working at an insurance firm. Then she tried to launch a singing career, which didn't quite work out. Nowadays, Jo has left her entertainment aspirations behind and has a career as a marketing and sales executive.

During Tammy's time on the show, we saw her adjusting to life after her divorce from her ex-husband and the demise of their formerly lucrative business. She has made a lot of movies since her RHOC days. She started a company, Veriya.com (which seems to have gone out of business), has worked in mortgage and real estate, and appeared in a commercial for Final Inches, a liposculpture procedure that she credits for helping her slim down after giving birth to her three children.

All RHOC fans remember Alexis talking about her clothing line Alexis Couture. Aside from that, Alexis and her husband, Jim, co-own trampoline parks Sky Zone Sports Anaheim and Sky Zone San Diego. She has also made sporadic television appearances as an entertainment news correspondent.

Jeana earns a living as a real estate agent, but aside from that, she has dabbled in the entertainment industry. Over the years she has modeled for Playboy, appeared in several ZZ Top music videos, and guest starred on TV shows like TJ Hooker and The A-Team.

Tamra Judge earns big bucks cast member of Real Housewives of Orange County, according to Celebrity Net Worth. She is also a licensed real estate agent and works for Ladera Real Estate. Plus, Tamra and her husband Eddie Judge co-own a gym called C.U.T. Fitness.

Quinn Fry was only on Real Housewives for one season, so the fans don't really know much about her. These days, Quinn works as an Internet marketing manager and webmaster for Cox Communications and she seems to be doing pretty well for herself.

When we first "met" Gretchen, she had just given up her career as a licensed real estate agent to take care of her sick fiancé, Jeff. Since then, we have seen her try to make her own brand with her Gretchen Christine fashion and beauty lines. She has also appeared on the reality series Marriage Boot Camp: Reality Stars with her fiancé Slade Smiley.

Vicki came at Meghan hard for "not working," but that is actually far from the truth. Meghan is a brand ambassador and director of sales for Sweat Cosmetics. Previously she, was an account executive and sales representative for two medical supply companies, and has also dabbled in modeling.

Vicki is always talking about her insurance business, so I kind of assumed that she would be higher up on the list. Still, a net worth of $7 million is nothing to scoff at. In addition to being the "OG of the O.C.," Vicki has a very successful insurance company, a jewelry line, wine line, and several other businesses.

Watching Lydia McLaughlin on her one season as a cast member, I had no idea that she was actually an heiress. She has such a humble attitude, so it's a little surprising to learn that her grandfather is the founder of Sterling Communications, a company that owns some of Canada's biggest magazines, TV stations, newspapers, and radio stations. Even with that family fortune, Lydia isn't sitting around counting her inheritance. She created her own jewelry line called LYDIA M Jewlery, and she is the Managing Editor of Beverly Hills Lifestyle magazine. Lydia and her husband, Doug, co-own a web design and digital marketing company called SKYLAB Media and an art gallery called SKYLAB Modern Art. Clearly Lydia is a pretty busy lady, so I have to assume that she just didn't have the time to be a Real Housewives cast member.

In addition to Shanon being full-time cast member on Real Housewives of Orange County, her husband David owns a construction company called Beador Construction, which brings in an estimated $13 million annually.

During the first season of RHOC, fans saw Lauri try to adjust to life as a divorced single mom who worked for her friend Vicki's insurance company. Since then, she's married her current husband, real estate developer George Peterson.

Lizzie Rovsek is a former model and Miss USA, who was once a junior designer at a Laguna Beach interior design firm. She is also a fashion designer for her own company, Sun Kitten swimwear. Aside from all that, her father Benjamin A. Arnold is the CEO and founder of a company called Image Analysis.

It's only fitting that the woman known as "Fancy Pants" is the richest one on Orange County. In addition to being a Real Housewife, Heather is married to Terry Dubrow, a successful plastic surgeon. She has also been a working actress since way before her Real Housewives days. Now, Heather and Terry have gone into business together with their own skin care line called Consult Beaute and work together on a series on E! called Botched: Post Op. And how does Heather celebrate having all that money? She sips champagne from her own line called Collette.

With 17 women in Real Housewives of Orange County history, it makes sense that this list was full of surprises. Still, it's definitely interesting to see how these women, who are constantly competing with each other, actually stack up when it comes to their finances.