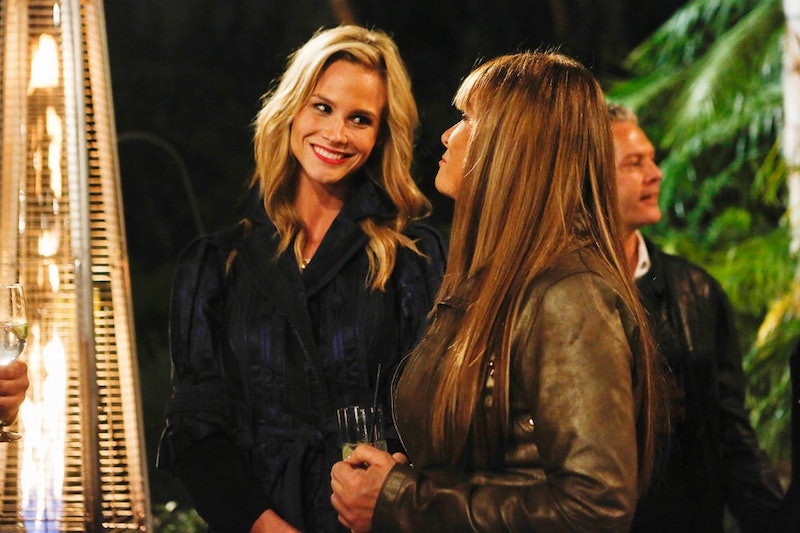 There's a new Housewife in Orange County, and I already love her. Meghan King Edmonds has joined The Real Housewives of Orange County as a breath of fresh air, and it isn't hard to be obsessed with her almost immediately. Meghan is the wife of Jim Edmonds, baseball superstar (for those — me — who know nothing about the sport), but she is so much more than that. Meghan King Edmonds' net worth is something she hasn't earned just from marrying her husband, but it's something she's earned herself before moving to the O.C. And that is something Vicki Gunvalson would give a major "WOO HOO."

Meghan's husband, Jimmy as she calls him, has an estimated net worth of $35 million. That's according to CelebrityNetWorth.com, and isn't necessarily the most accurate (although athletes' salaries are more known than others). Before Meghan married her husband in October 2014, Meghan had a career in St. Louis in medical software sales. As mentioned on the first episode of the season, Meghan was living a "jet-setter" life before becoming a stepmom and moving to California. So how much was she making before picking up that orange for Real Housewives of Orange County?

Meghan's estimated net worth on CelebrityNetWorth.com is $5 million dollars. But along with her husband's net worth, Meghan has earned her own net worth through a few different types of jobs.

Meghan's LinkedIn profile lists her past two jobs as an account executive and a sales representative at two medical supply companies. The average salary for a sales executive is approximately $150,000. Meghan said on the show that her average deal was $300,000. Now, we can assume that working in sales, Meghan was also making commission on sales like that, so add even more to the average base salary.

Meghan is also the brand ambassador and director of sales at Sweat Cosmetics. Sweat is a brand of makeup that is geared towards women who exercise (thus the name). Meghan is listed as the director of sales, and "provides the closest point of contact for Sweat's LA-based manufacturing." It is tough to gage how much she would earn from her position, since the company seems relatively new, but she's definitely earning her own money.

Meghan has clearly worked for her money, making her new role on The Real Housewives of Orange County even more awesome. Now, let's just hope she can survive her first season.

More like this
The Richest 'Bling Empire' Cast Member Is...
By Hugh McIntyre
Danny Dyer & Ellie Taylor’s New Netflix Game Show Is All About Cheating
By Rachel Mantock
What Is Barack Obama’s Net Worth? He Makes *Way* More Now As An Ex-President
By Hugh McIntyre
Pete Davidson Mentioned Kanye West & Ariana Grande In His Last 'SNL' Sketch
By Grace Wehniainen
Get Even More From Bustle — Sign Up For The Newsletter