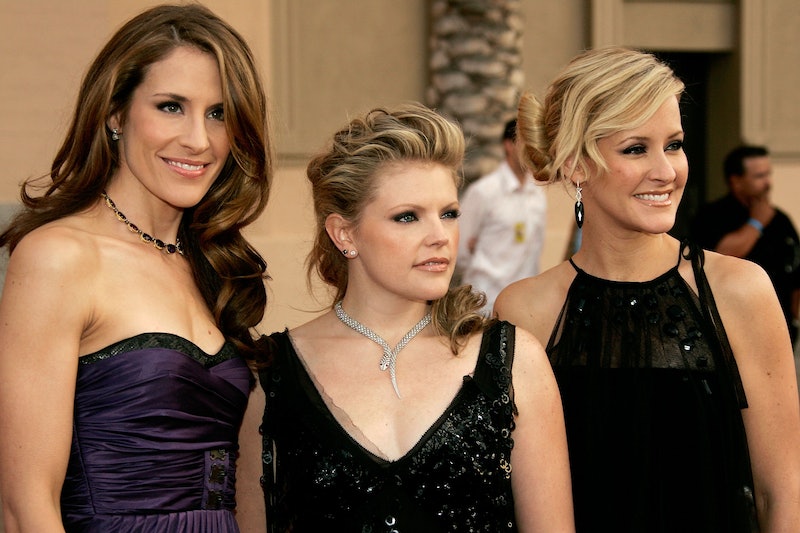 As someone who grew up listening to the trio that is Natalie Maines, Emily Robison, and Martie Maguire, the news that the Dixie Chicks are launching a tour of the United States in Summer 2016 couldn't have fallen on happier ears. They never quite made it to the top of the list of my favorite artists, which probably says more about me than it says about them, but their songs provided the background for my teen years, whether I was swaying to "Wide Open Spaces" at a middle school dance, or memorizing the words to "Goodbye Earl" on a school trip. (I still remember every single line, in case anyone's keeping track.)

But I think I didn't realize how much I'd missed these ladies until I heard we were gonna get another dose of them. Their upcoming tour will be called the "DCX MMXVI World Tour," beginning on Jun. 1 in Cincinnati, and extending all the way to Oct. 10, when it will close at the Hollywood Bowl in L.A., with about 40 cities in between. If you're interested, tickets go on sale Nov. 20, and I recommend you take advantage of them, because a Dixie Chicks concert is still the best way to spend your time, as evidenced by these eight reasons.

1. They Were Protesting Before It Was Cool

Dude, these ladies were against the war in Iraq before most politicians, and they got boycotted for it! We owe them an apology, and our admiration, for seeing things clearly from the start.

And President Bush wasn't the only person they went up against. They also didn't mind ruffling the feathers of their more conservative fan base with terms like "mattress dancing" in their song "Sin Wagon," and that whole premeditated murder plot line in "Goodbye Earl."

3. They Have Chops And Cred For Days

Remember that thing where they didn't kowtow to their audience? Well, it's paid serious dividends, as the Dixie Chicks are both the top-selling all-female group and top-selling overall country group since 1991, the start of the Nielsen era. They also have 13 Grammys under their belt, so respect.

These ladies have been together since 1989. Ride or die.

6. They've Been Feminists From The Jump

The reason you can say with pride that you're a feminist now and be embraced for it is because women like the Dixie Chicks started calling themselves that even when there was still stigma attached. When they were putting the band together, they had a hard time getting people to even take them seriously as an all-female band, which was reflected in the amount of time it took them to gain traction. But they pushed through that, and look at them now! Unstoppable.

7. There's Something For Everybody

These three cross genres like it's their job, covering everything from country, of course, to pop, bluegrass, soft rock, and alternative. So your blanket "I like everything but country" statement doesn't apply here.

8. Because It's Been A Long Wait

SO LONG. Their last album, Taking The Long Way, came out in 2006 — nine years ago! Oh, and it also won the Grammy for Album of the Year, with "Not Ready To Make Nice" taking the Song Of The Year. Sweet, sweet vindication!

So yeah, are you convinced yet? These women are an institution in not only music, but also activism and feminism, so, if you have a chance to catch them in concert, what are you waiting for?