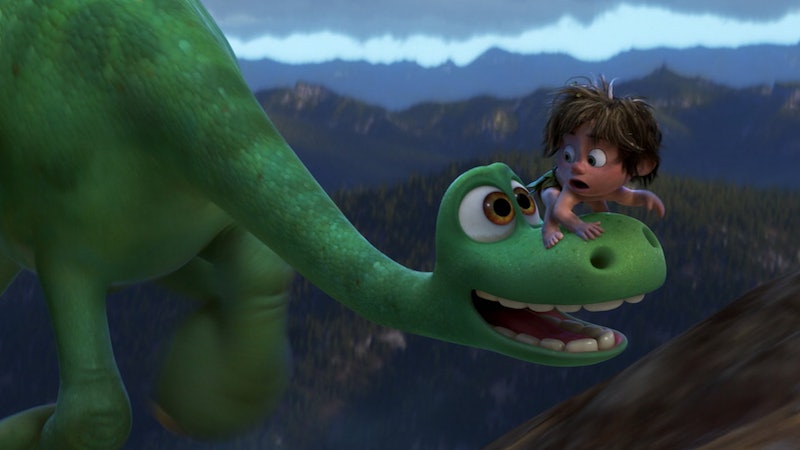 Confession: as a longtime fan of all The Land Before Time movies (thank you for kickstarting my brief interest in archeology), I am nothing short of excited for The Good Dinosaur, Pixar's 16th animated feature film, directed by Peter Sohn and set to open in theaters Nov. 25. Everything from the Good Dinosaur voice cast to the movie's premise has me excited; it takes place in an alternate timeline where the dinosaurs were never extinguished by an asteroid (because that would make for a terrible children's film). The story follows a Apotosaurus dinosaur named Arlo who gets lost in the Claw-Tooth Mountains while trying to find his way home. On his journey, the dino befriends a human cave boy whom he names Spot. From there, the movie primarily focuses on Spot and Arlo's beautiful, species-defying friendship.

Don't believe me that The Good Dinosaur will have you as emotional as Inside Out or any other of Pixar's best films? Take a look at the film's trailer below and see for yourself. I dare you to get through it without going aww at least twice, and reaching for a box of tissues. Man, Pixar knows what it's doing, and does it time and time again.

As far as the cast goes, there are a few fresh faces in addition to more established stars who are lending their vocal talents. Something I've always found entertaining whenever listening to actors in animated films is thinking about the television shows and movies I know them best from. And once you realize what shows and movies each contributing star is from in The Good Dinosaur, it'll definitely make you think about the film in a different light. It might even enhance your viewing experience the same way it's done for me in the past. Read on to check out the eclectic main cast.

He's Also Been In: Monsters University and America's Most Wanted: America Fights Back.

Sam Elliott As Butch, A Dino Of The Tyrannosaurus Breed (Not As Adorable), Who Is Weirdly Enough, A Small Business Owner With A Ranch

He's Also Been In: Ghost Rider, Hulk, and The Big Lebowski.

She's Also Been In: The X-Men franchise (as Rogue), and of course, True Blood (as Sookie Stackhouse)

He's Also Been In: The Hunger Games (as Beetee), a few James Bond movies (Casino Royale and Quantum of Solace), and Boardwalk Empire.

Frances McDormand As Momma Ida, The Dino Mom To Wright's Poppa (And Typically Gets Many Awards/Nominations)

She's Also Been In: Olive Kitteridge, Madagascar 3: Europe's Most Wanted, and a handful of the Coen brothers' films (for she is married to Joel Coen).

Now, when you go to see The Good Dinosaur in theaters, I dare you to imagine Sookie Stackhouse and Beetee hanging out with the likes of beautifully animated, prehistoric dinos. Also, you'll want to keep this list in hand for when you recognize so-and-so's voice and have an actor's name on the tip of your tongue. We've all been there, and there is no feeling more frustrating in the world than trying to figure out who that actor is days after you watch the movie.