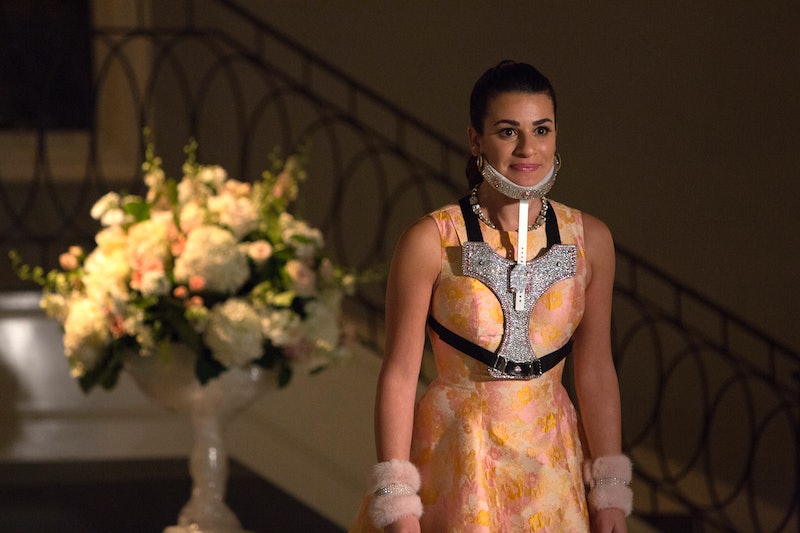 When you're watching any television show — especially one created by Ryan Murphy — it can sometimes feel difficult to completely rule out any potential plot twists, regardless of how ridiculous or out of left field they may seem. Take for instance, the possibility that Hester could really be pregnant on Scream Queens . Normally, I would say that this would be too insane to even consider because a.) we haven't actually seen her hook up with anyone yet, unless she and Chad got together in private, and b.) Hester came right out and said "I'm pregnant" in the promo and these teasers reveals are usually meant to lead viewers astray. However, when it comes to a show like Scream Queens , anything is possible.

This series does not play by the rules and would be crazy enough to give us the honest truth right off the bat simply because they know we would think it was a trap. So really, the likelihood of Hester being pregnant is pretty much 50/50 at this point in time. On the one hand, I can't help but think this is just another one of Hester's lies in an attempt to take down Chanel and rule the Kappa House for herself. We've already seen her try to manipulate her way to the top multiples times before now. What's to say this little ploy is any different?

In fact, the synopsis for this week's episode "Ghost Stories" states that: "Hester's announcement pushes Chanel to the brink." But just because Hester makes a pregnancy announcement doesn't make it automatically true. It could just be the spark Hester needed to ignite Chanel's anger and make her go off the rails. We all know that Chanel wouldn't need something silly like actual proof before seeking out revenge. (Because we all agree this would totally be Chad's kid, right?)

However, at the same time, I'm not entirely willing to rule out the idea that there could be some truth to Hester's statement. I mean, let's face it, the lie feels pretty out of left field. What if she really is pregnant? It's not as if this series hasn't tackled the idea of college pregnancy in the past. In fact, that concept is what launched this whole show into existence with the birth of the bathtub baby. Perhaps Hester's unborn child represents the new generation of Kappa House residents who will face the same horrors as the girls before them have. (It's the messed up circle of life, people.) Not to mention how this could also tie in with Hester's weird habit of calling everyone "Mommy." Maybe that was a hint even back then that she, herself, was bound for motherhood.

Honestly, I could play this guessing game all day, but the cold, hard truth of the matter is that we really won't know anything concrete until the episode airs. And even then, I'm sure that we'll be plenty confused about other things. Scream Queens is a roller coaster ride of insanity and most of the time it doesn't make sense. It's doesn't have to. In fact, we'd be disappointed if it did. So whether or not Hester is pregnant, this show would find a way to make both options work and leave us begging (and, of course, screaming) for more.