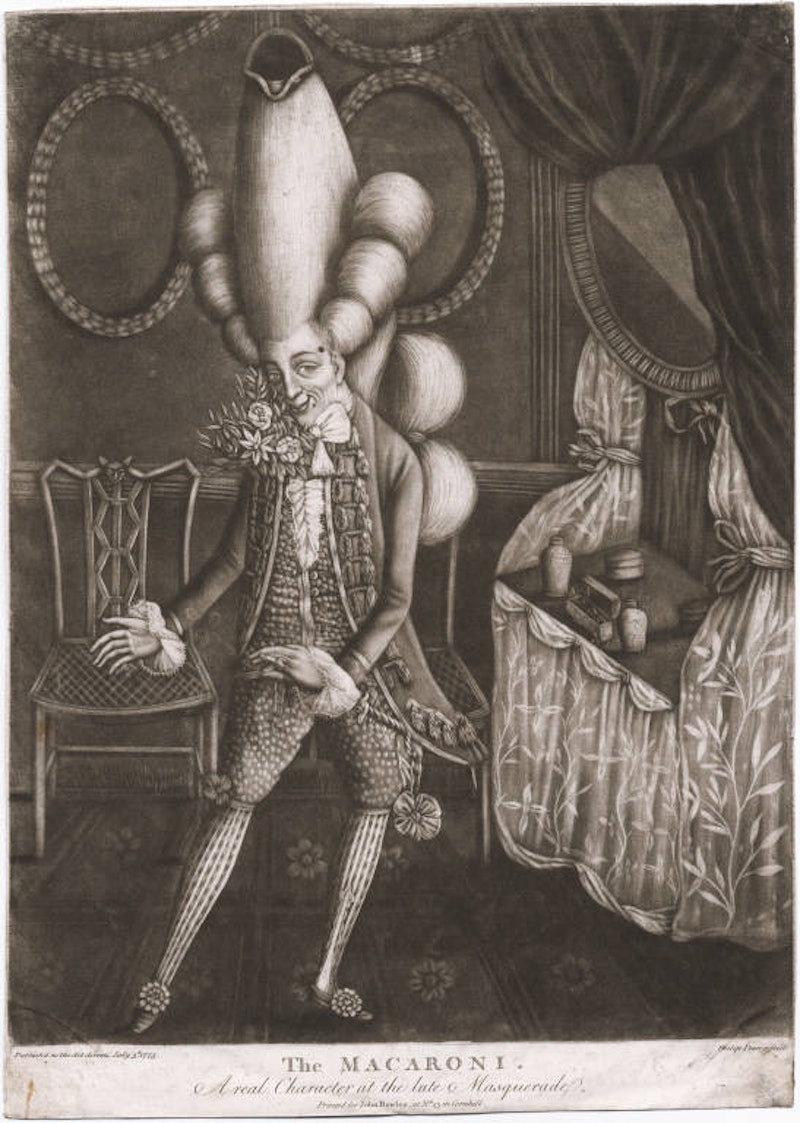 You might have wasted some serious energy and emotion lamenting the fashion trends of this past year (like teddy bear shoes or the whole gorgeous gothic thing), but believe me when I tell you that culottes and mermaid hair have nothing on a certain nine weird fashion trends from history. Granted, these nine garments and practices might not seem strange at first glance, but when you take a closer look and examine the cultural and social environments that surround them, things start to get a little bizarre.

While many centuries-old fashion trends were focused on making women look more appealing, they were also used as a means to control and socially identify the wearer — men included. And though fashion has arguably always been politicized, sometimes it's fun to leave the serious side of things behind in favor of examining all things strange, unusual, and over-the-top.

Below are some of the most bizarre fashion trends ever, taken from Medieval times, the Tudor era, and more. So learn a little about aristocratic fashion's odd and slightly off-putting history. When you find out the reason people used to wear powdered wigs, you're going to be really glad they're a thing of the past.

In early Tudor England, sugar wasn't readily available. By the time that Elizabeth I came around, it was everywhere (though at a very high cost), and the Virgin Queen had a thing for sweets. According to The Telegraph, her teeth were black and decaying, and some folks even complained that it was hard to understand her. Though Elizabeth's teeth were a product of a sweet tooth (and a whole lot of neglect), they also sparked a short-lived fashion trend in England: Women purposefully blackened their teeth to prove that they had enough money to buy sugar.

"Hobbling" is a term for tying an animal's legs together to prevent it from running away. In the early 20th century, the hobble skirt attempted to do the same to women. Designed specifically to slow women down and prevent them from taking large steps, the hobble skirt is certainly symbolic of how women were viewed at the time. According to the Metropolitan Museum Of Art, the first hobble skirt is credited to a French designer called Paul Poiret, who eschewed petticoats for this sleek, crippling silhouette, while also forgoing the then-popular corset. "Yes, I freed the bust," Poiret once wrote. "But I shackled the legs."

Ladies, if you stuff your bras, feel no shame: Your impulse to pad out your clothing has some historical significance. Popular during the Elizabethan era, men and women used to bombast their sleeves to create large, "leg-of-mutton" arms. Men would also bombast their doublets to create a filled out belly, a symbol of prosperity at the time.

Men trying to prove the power of their penises has been a thing long before the existence of the dick pic, and codpieces were the penis enhancements of the 15th and 16th centuries. They were made out of a variety of materials — sometimes even carved from (ahem) wood — and served to make men feel good about their members.

Many people will recognize the powdered wigs of the Middle Ages, but not many are as familiar with their tie to syphilis. In Epidemics And History: Disease, Power, And Imperialism, author Sheldon J. Watts explains their significance: Back then, many of those in the upper and middle classes had the disease, which produced some raunchy symptomatic smells — and not to mention, baldness. To cover the smell, many people wore goat, horse, or human hair wigs called perukes. The wigs were powdered in scents like lavender and orange, to cover the stink coming from down below. The trend caught on when Louis XIV started wearing them. And yes, he had syphilis, too.

If you thought a stilettoed Louboutin was hard work, your ankles and toes are going to quake in fear at the thought of chopines. Popular with Venetians in the 16th and 17th centuries, the shoe attachment was invented to help women walk through muddy streets. However, the practicality of the chopines soon turned to fashion, as being tall signified that you were an important, wealthy person. Sometimes, a lady's chopines were so high that she needed an attendant to maintain balance.

The garment was interesting in and of itself, but perhaps more shocking was the general public's reaction to it. Here's how the story goes: An 1851 temperance activist named Elizabeth Smith Miller wore a bloomer suit, which consisted of loose trousers gathered at the ankles, topped with a short dress or vest. Other women found it sensible, but those who wore it were frequently harassed on the streets for being too lascivious, according to the BBC. Basically, the bloomer suit came with the same shaming as today's modern day mini skirt. As a result, the trend of wearing the bloomer suit died out.

It's not just your favorite hangover dish, but rather a delightful and strange fashion trend from the mid 1700s. Remember Yankee Doodle Dandy, and how he stuck a feather in his cap and called it macaroni? That lyric is in reference to young French men in the 1750s, who took Italian fashion to the extreme.

The most notable element of macaroni fashion was a huge wig with the tiny hat (or feather) on top, but it also included flashy waistcoats, bright stockings, and fancy buckled shoes. According to The New York Times, macaroni men also made up their own language (a combination of French, English, and Italian), making their dandy club of frippery and fashion even more exclusive.

The crinoline was a hoop skirt worn under the frocks of the 19th century, and it was made from horsehair, wood, or sometimes even steel. Intended to push the skirt out and give the wearer the appearance of big, regal hips, the crinoline was also incredibly dangerous.

According to the FIDM Museum And Galleries, there are tales of women getting caught up in gusts of wind, being tossed off of cliffs, and getting caught in carriage wheel spooks — yikes. There are also stories of women not being able to escape from burning buildings due to the width and stiffness of their skirts. In 1863 in Santiago, Chile, thousands of people died in a church fire caused by a gas lamp. Many of the victims were women, as their large crinoline skirts got caught in the door.

From syphilis-masking postiche to skirts that could cause your untimely death, the fashion and beauty trends of the past were clearly a dangerous and strange force to be reckoned with. All things considered, reaching for a pair of trend-seeking culottes doesn't seem so bad, does it?

More like this
Here Are All 703 Outfits Rachel Wore On Friends
By Kat George
The Best Heels For Bunions, According To A Podiatrist
By Margeaux Baulch Klein and Maria Cassano
7 Eyebrow Trends That Are Going To Be Everywhere In 2023
By Audrey Noble
The 10 Biggest Tattoo Trends Of 2023
By Carolyn Steber
Get Even More From Bustle — Sign Up For The Newsletter