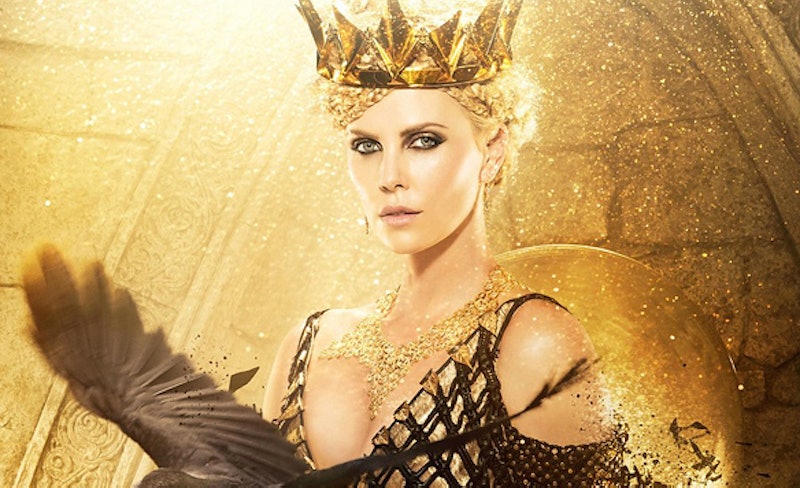 Once upon a time, there was a much anticipated yet mired-in-controversy movie that debuted four badass posters. Yes, we get re-acquainted with old characters and introduced to two glorious ladies with these new posters for The Huntsman Winter's War. Yeah, it feels super awkward that the follow-up to Snow White and the Huntsman is going forward sans Snow White, but it looks as though the film is plugging in a decent amount of cool chicks to fill in the gap.

The film’s confusing core plot will revolve around a conflict with Ravenna’s sister Freya, a reclusive ice queen who’s creating an army of skilled warriors. Having fled her old kingdom after some heartbreaking betrayal, she tells her top picks Eric (the titular huntsman) and Sara (Jessica Chastain, what up) to “harden their hearts to love” but oops, that doesn’t happen. Anyway, the two evil queens try to take over the world or something, and it’s up to the two huntsmen to stop them.

So like it’s Frozen, but not Frozen at all. Which is fine, I loved Frozen. And I love the looks of all these ladies, because they are killing it. Seriously, check out all these magnificent badass babes (and that one guy who’s in the title).

Charlize Theron As The Evil Queen

Let's start off with a familiar face: Theron as Ravenna. Her namesake is elegantly bursting from her cleavage, definitely a power move on her part. Her outfit is also a marvel of design: nobody should be able to carry that much fishnet. If I tried that look, I'd return back to the most Hot Topic-y version of myself. All jokes aside, that black and gold combination is glorious, and she looks absolutely wicked... in the best way.

Jessica Chastain As The Warrior

I feel like there could be no vaguer title than "The Warrior," but those sharp battle blades at least live up to her title. Equally amusing is that she's wearing leather pants in fairy tale medieval times and no coat in a blizzard. All of are aesthetic choices just scream hardcore, so no, I would not want to mess with her. Would it be crazy to assume that this could be the huntsman's much alluded-to wife? Because if there's going to be any ill-fated falling-in-love here... I mean, I would assume.

Emily Blunt As The Ice Queen

You're going to look me in the eye and tell me that isn't just a jacked up version of Elsa? Seriously? Not that I'm opposed to it, I think that icicle chic is a very good look on everyone, especially Emily Blunt. I think there's also hints of a Yuletide Daenerys Targaryen somewhere in all this. Derivative or not, Blunt looks absolutely divine as Freya, so good that just having her glare at me from this poster is giving me the chills (I'll see myself out).

Chris Hemsworth As The Huntsman

Oh, and Thor's also in this movie.

Yeah, it's pretty impressive that all these ladies can make a mega-babe like Hemsworth seem like an afterthought, but there you go. Excited to see all the sisterly (attempted) world domination and top notch costumery that'll come with these girls when The Huntsman Winter's War hits theaters next April!