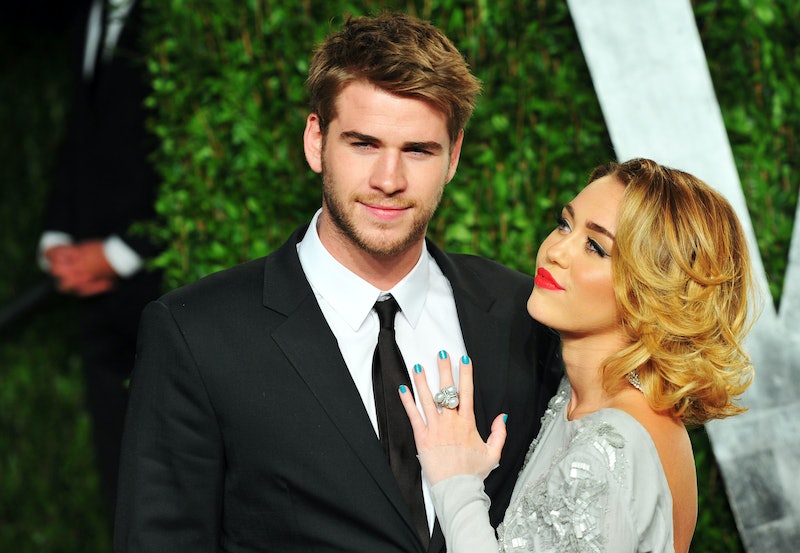 Miley Cyrus and Liam Hemsworth have seriously been challenging what's expected of exes, showing off that a mutual respect and love is still possible, even post-breakup. Recently, in an interview with Men's Fitness, Hemsworth spoke of his past relationship with Cyrus, saying, "We were together five years, so I don't think those feelings will ever change... It wasn't just a fling. It really was an important part of my life and always will be." D'aww. And over the weekend, the exes got together at Wylder's Pet Center in Los Angeles, where Cyrus helped Hemsworth adopt a new dog.

It seems that Cyrus and Hemsworth both attended an event held by the pet center to promote animal adoption. Wylder's Pet Center posted an Instagram of Hemsworth with the caption, "Thanks @mileycyrus for loving dogs as much as we do!! You helped find this gigantic, 6 month old puppy a new home. @liamhemsworth you will give this deserving baby a great life."

Hemsworth has been busy on his worldwide promotional tour for The Hunger Games: Mockingjay, Part 2, so it seems especially significant that he would take a time out of his hectic schedule to adopt a new pet along with Cyrus. When you think about it, his ex is the perfect person to team up with when it comes to pet adoption, considering she seems well on her way to owning her own zoo. Cyrus' love of animals is pretty well-documented, so I wondered how intense their animal love bond was in the past when they were still together.

The couples' love for rescuing animals goes back to when they were engaged and in love. Back in 2012, Cyrus adopted a bulldog puppy, Ziggy, for her then-fiancé. During that same time, they also adopted dogs Happy and Mary Jane, who seem to be with Cyrus following the break-up.

Cyrus and Hemsworth have each also taken their love for animals to the next level by adopting a vegan diet, which Cyrus spoke about in a Paper Magazine interview. In the interview, she opened up about how she immediately swore off animal products after the death of her beloved dog, Floyd, who was attacked by a coyote.

During Hemsworth's Men's Fitness cover story, he also unveiled that he had recently gone vegan. He shared,

My own health, and after all the information I gathered about the mistreatment of animals, I couldn’t continue to eat meat... At the same time, I have a lot of friends who are vegan. [Hunger Games co-star] Woody Harrelson was actually one of the original reasons I became vegan, because he’s been vegan for, I don’t know, 30 years or something... But there are no negatives to eating like this. I feel nothing but positive, mentally and physically. I love it. I feel like it also has a kind of a domino effect on the rest of my life.

Hemsworth also had some very Miley-esque views on rescue dogs when he spoke about his dog, Tani. He said, "She’s awesome. I got her about a year ago. She’s the perfect dog. I’m a big advocate of pet rescue. Especially in California. If you’re going to get a dog, get a rescue."

Well, in this case it makes perfect sense that the two amicable exes would reunite for the greater good. And I'm hoping that there are some doggy play dates with their pups in the future.

More like this
The 5 Best Cat Trackers
By Megan Gray
The 9 Best Duvet Covers For Dog Hair
By Claire Epting
The 8 Best Dog-Proof Litter Boxes
By Lauren Moison
Bennifer, Kravis, & 14 Other Fun Celeb Couples Halloween Costume Ideas
By Emma Carey and Brittany Leitner
Get Even More From Bustle — Sign Up For The Newsletter