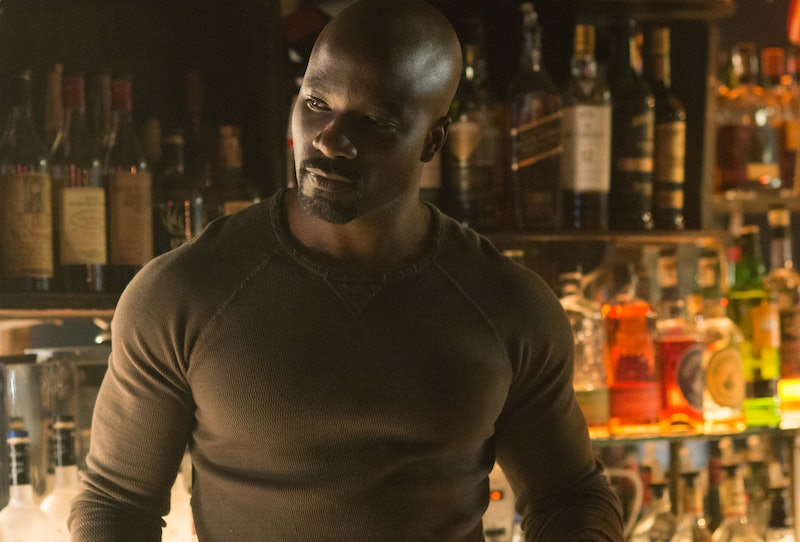 Netflix is definitely on a winning streak. This Friday marks the premiere of Jessica Jones, the next installment in a franchise focused on Marvel superheroes and villains. The show centers on the life of Jessica Jones (Krysten Ritter) as she tries to solidify her new career as a private investigator following her time working as a superhero. The star of Netflix's next Marvel series will be introduced on Jessica Jones, so as soon as you catch sight of him, you'll likely want to know when Luke Cage will premiere.

After we meet Luke, played by Mike Colter, in Jessica Jones, we'll see him again in Luke Cage, and he's expected to be part of The Defenders, which would assemble all of Netflix's live-action Marvel heroes. I'm looking forward to seeing Luke and Jessica's dynamic in Jessica Jones, and once it's introduced, I'm sure I'll be even more excited to see things from his perspective, and get to know his story better. Unfortunately, anyone who plans on marathoning all of Jessica Jones in one day will have to wait a while before seeing Luke's story continue.

Currently, Luke Cage is set to premiere in 2016, though a more specific release date has not been released. However, Jessica Jones' Nov. 20 premiere wasn't revealed until September 2015, so when we do get the final word on Luke Cage, the premiere may follow shortly after. And there is some more good news. According to ComicBook.com, the production for the show began in September 2015. If you compare that to the period between production and release for Jessica Jones (eight months, according to MCU Exchange), that makes April 2016 a likely time for Luke Cage's premiere. While we wait to find out when Luke's series will start, here's what you should know about the character.

He Had A Difficult Past

In Marvel Comics, Luke (whose real name is Carl Lucas) was involved with the Bloods during his childhood in Harlem. He was in and out of juvenile detention centers for petty crimes, and was aspiring to higher racketeering when he realized that his criminal actions were harming his family.

He Was Totally Screwed Over

Luke then adjusted his life trajectory, trying to find legitimate, legal employment. This search was derailed, however, when his former best friend planted drugs in his apartment as revenge for what he thought was a breakup caused by Luke's actions. Back in jail, Luke receives the false news that his father passed away and becomes enraged.

He Gained His Powers Through Science

He eventually becomes the subject of Dr. Noah Burnstein's experimental cell regeneration trials, which spur Luke's superhuman strength and durability. It is then when he turns to fighting crime, instead of committing it.

He Clicked With Jessica Because They Were Both Misfits

Though both superheroes were committed to fighting crime, their salty and wild personalities didn't make them popular in the squeaky-clean Marvel alliances. Jessica was then known as "Jewel," a hero with a foul mouth and proclivity for whiskey. In the comic books, Luke's unconventional style attracted Jewel's affections, where the two ultimately ended up acting on their tension during a drunken one night stand, which eventually lead to a lasting relationship. I can't wait to see how that tryst plays out in both of these Netflix series.

Colter Has Quite The Resume

The actor bringing Luke to life has starred in a wide range of movies and TV shows, including, The Good Wife, The Following, Law and Order, Men in Black 3, and more. But if his comic background is any indication, Luke Cage will prove to be Colter's most riveting role yet.